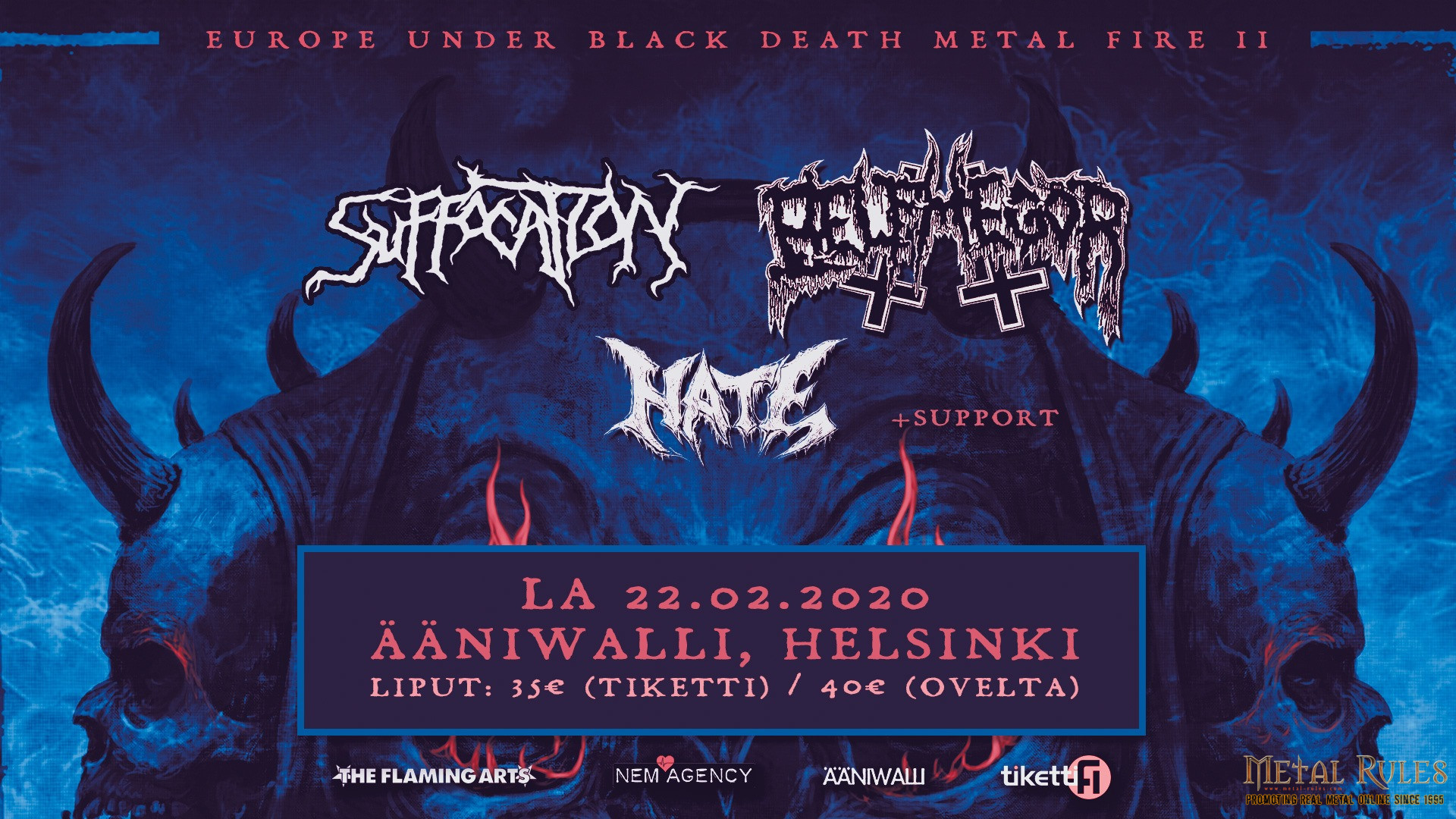 A five-band package consisting of three leading extreme metal bands were more than a tempting line-up to lure all the extreme metal fans to a gig. Suffocation, Belphegor, Hate have been the part of the death metal genre for about 30 years.  As a result, the small underground venue was totally packed by hundreds of death/black maniacs when these three bands unleashed the raw and brutal black/death metal.  Besides these main bands, a couple of warm-up names opened the night.

An opening band called Carnosus was an entire unknown group for the crowd. The Swedish group stood for the blackened thrash, at least it sounded so. The audience followed the band’s performance from the solid distance from the stage and seemed to appreciate. Carnosus sounded solid, but due to their unknown background, the material basically remained more or less incognito. As far as their stage presence, they definitely ripped at the stage, but they may need a little bit more rehearsing to created the lethal riffs.  But hey guys – next time when getting on the stage, leave your Adidas pants in the dressing room or whatever backstage area, as Adidas pants are for Korn.

Another support band was Betrayal from Germany.  Betrayal combines the thrash elements with death metal influences. The four-piece must have been gigging quite a bit as their playing was tight and well-rehearsed and they seemed to have experienced about being on stage. The band’s stuff sounded so catchy and tight, therefore this band needs to be checked out. The guys kept wearing hoodies for some eccentric reason – obviously, they tried to bring some kind of mysterious atmosphere or being eerie.  Instead Betrayal could focus on developing something else than having hoodies.

The Polish blackened death metal squad led by ATF Sinner has been pounding the deadly metal since the early ’90s. Even though members have come and gone thru these years, ATF Sinner has guided Hate and released quite a few albums. BUT Hate have never ever reached for the bigger success as having always had the more underground status and cult following.  The band’s soundcheck took more time than expected as the Polish four-piece started nearly 20 minutes late. As a result, the band was obliged to short the set when a roadie showed the mark of cutting off. The band should have got more playing time as their set was over until the audience even noticed.  Therefore the short set didn’t give that much impression. Hate sounded epic and darkened for sure. ATF Singer’s growling was sharp. Hopefully, Hate would arrive at Finland for more gigs.

Belphegor has gained quite a solid fanbase in Finland. By performing at Steelfest has established their name among the extreme metal fans in Finland. The venue was truly packed as the people had definitely arrived on time to see Belphegor. The Austrian blackened death metallers have always put a lot of efforts into the visual aspects. Belphegor didn’t show any mercy on the stage, offering a raw and barbaric set. The frontman Helmut’s look was grim and nasty as if starring through the eyes of the dead. His way of keeping his mouth open while playing the guitar looked insane. The Austrian’s blackened death metal was intensive, tight and merciless. Belphegor’s gigs have always been one kind of ritualistic experiences and bring one sort of controlled chaos. The gig in a small venue proved that Belphegor was at the finest shape in the more authentic club environment.

Several years have passed by since Suffocation’s latest visit to Finland. Since then the whole line-up of Suffocation has undergone quite significant changes. The longtime and legendary Frank Mullin has retired from the band and has been replaced by the Disgorge member Rick Myers. Despite the changes the long time and sole members Terrance Hobbs has guided the band since the early ’90s and has once put the whole band on the hiatus. However, Suffocation is extremely popular among the death metal crowd. The venue was packed, when the five-piece hit the stage. Even though the band travelled the whole day, but there was a sign of tiredness, as the five-piece unleashed one hell of an intensive and brutal set of the murderous sounding death metal. The current frontman seemed to be appreciated and approved by the death metal crowd. His growling and passionate moving on the stage were relentless. The guitarist and founder of the band, Terrence Hobbs, kept ripping his guitar and banging his dreadlocks. The setlist consisted of the material from several albums. Of course, the classic “Jesus Wept” got played. The audience went insane in the pit and demanded more. As mentioned earlier, even though the band has undergone even radical changes, but the name of this legendary band is so iconic that they attract to the audience. Suffocation came and conquered so did Belphegor, but Hate suffered from the shortened set, but these kinds of death/black metal gigs are definitely welcomed to Finland.