The Ronnie James Dio Stand Up and Shout Cancer Fund, founded in memory of the late rock music legend, will commemorate the 10th anniversary of his passing and the formation of the charity with an Awards Gala on February 20, 2020. The Memorial Awards Gala, which will take place at The Avalon in Hollywood, will be hosted by radio and television personality Eddie Trunk and will recognize honorees who have played a role in either Dio’s legacy or that of the charity. The festivities will begin at 6 p.m.

Eight awards named after songs written by Ronnie James Dio will be presented to the following distinguished honorees:

VIP attendees will be treated to a gourmet dinner with wine pairings. In addition, the event will include a major silent auction and a raffle comprising unusual items and entertainment memorabilia. Among the rare items that will be available are:

– A luxury 6-night All-Inclusive South African Photo Safari for two at the 5-star Ezulwini Safari Lodges in Greater Kruger National Park
– A pair of tickets to Rock of Ages Hollywood at The Bourbon Room (courtesy of Rock of Ages Hollywood)
– Four hours of recording studio time to record, mix, and master a demo at his Total Access Studio, donated by honoree Wyn Davis, who engineered, mixed and mastered the majority of Ronnie’s albums
– Cabin for 2021 “Monsters of Rock” cruise from Fort Lauderdale, FL
– A 3-night stay at the magnificent two-acre Grand View Manor nestled amid the orange groves just 8 minutes from the quaint old town of Ojai. This 5,600 square foot four-bedroom main house and two-bedroom guest cottage features stunning mountain views from every room
– A 4-hour harbor cruise for up to 12 people from Marina del Rey
– LA Kings “Tunnel Team Experience” and two tickets to a regular season game of your choice package
Additionally, there will be a specially designed diamond-studded one-of-a-kind Rolex watch dubbed DIO’s Sacred Heart Timepiece created especially for the Dio Cancer Fund Gala by www.darktriumph.com. The watch is a vintage Rolex Datejust watch from the 1960’s with a custom diamond and ruby Sterling Silver with 18kt yellow gold bracelet featuring Dio’s “Murray” handpainted on the dial by Australian fine artist Timothy John. 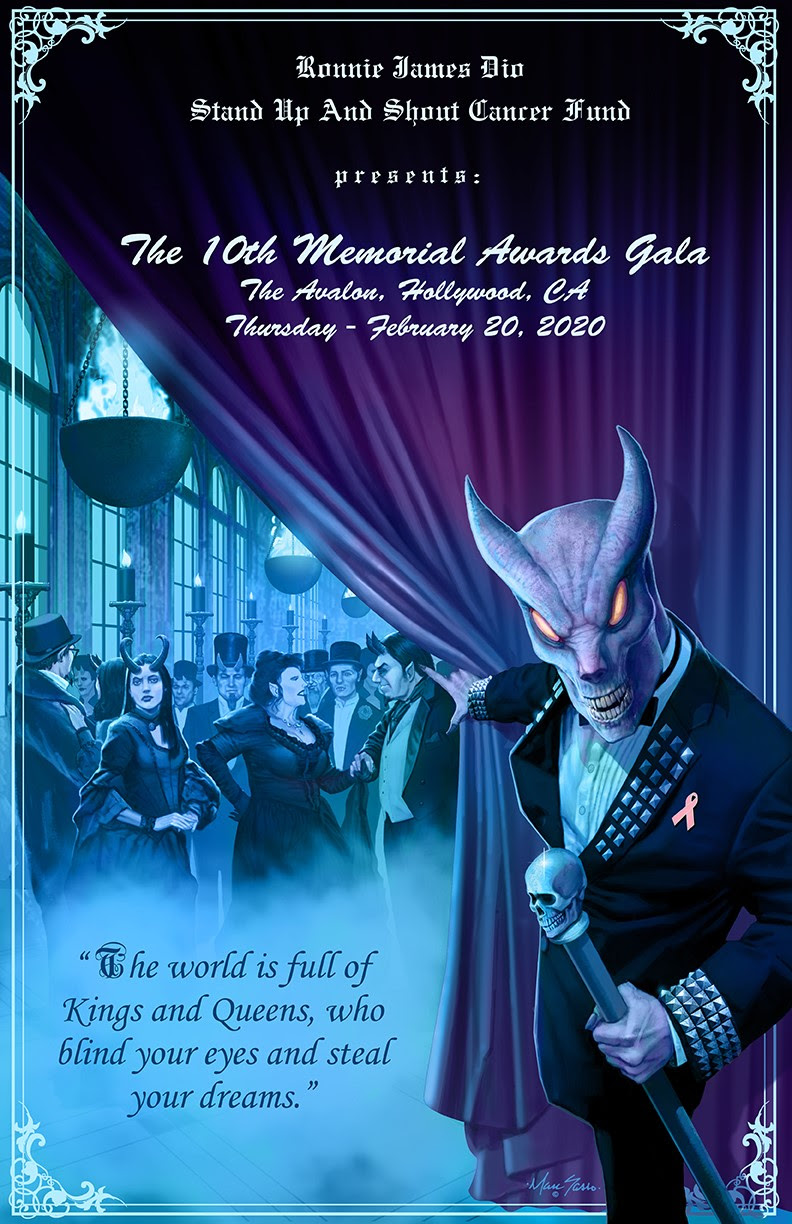 The Avalon is located at 1735 Vine Street, Los Angeles. For information and to purchase event tickets, visit:
www.universe.com/ronnie-james-dio-10th-memorial-awards-gala

The Ronnie James Dio Stand Up and Shout Cancer Fund was founded in memory of the legendary rock singer Ronnie James Dio, who lost his life to gastric cancer in 2010. A privately funded 501(c)(3) charity organization dedicated to cancer prevention, research and education, the Ronnie James Dio Stand Up and Shout Cancer Fund has already raised over $2 million in its short history. Monies raised have been committed to the cancer research work of the T. J. Martell Foundation for Cancer, AIDS and Leukemia Research, the gastric cancer research unit of the M.D. Anderson Cancer Center in Houston, where Ronnie was treated for gastric cancer during the last six months of his life, and other cancer research projects. Since 2016, the Dio Cancer Fund has also committed funds to support the research of Dr. David Wong and his team at the UCLA School of Dentistry in developing a simple, non-invasive saliva test for the early detection of cancer, which is in keeping with the Fund’s mission of cancer prevention, research and education.