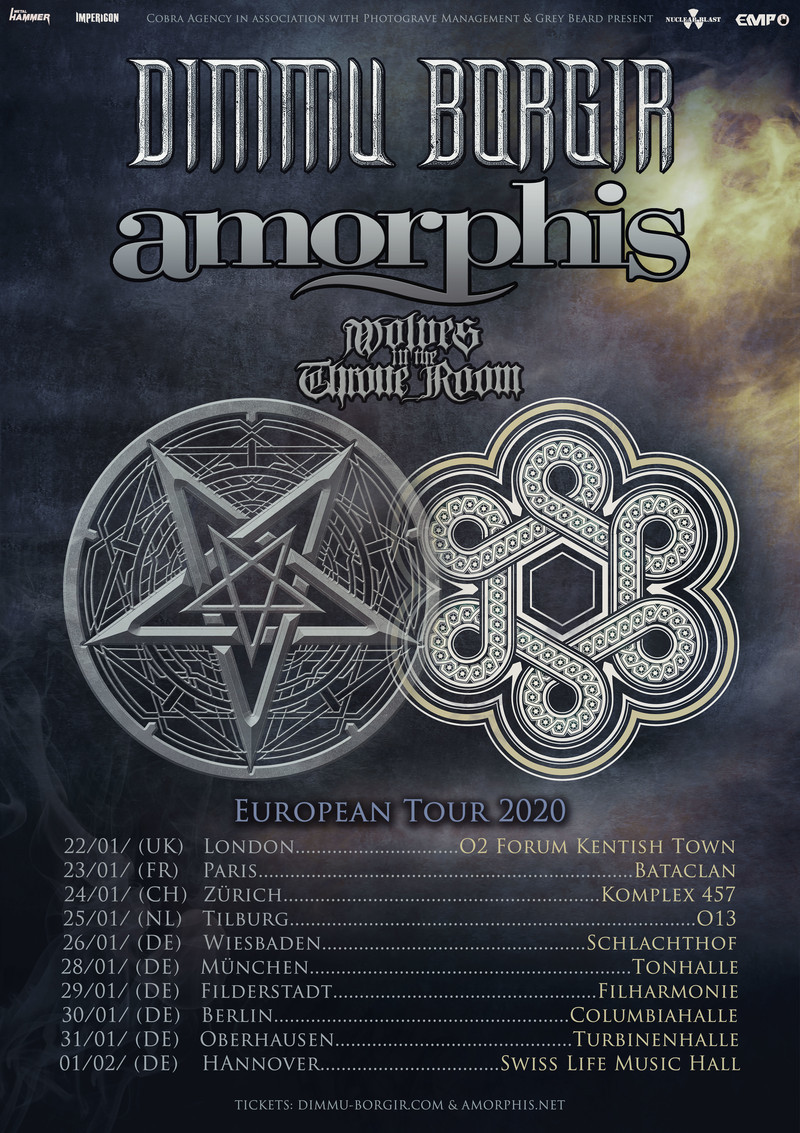 It was a celebration of all things majestic in extreme metal when Norwegian veterans Dimmu Borgir descended on London this evening.

The O2 Forum, Kentish Town was packed to the rafters with metalheads ready to enjoy everything that symphonic black metal can offer in all its glory.

First on the bill were some guys who had flown in all the way from the West Coast of America: Wolves in the Throne Room; the band who allegedly brought atmospheric black metal into public understanding.

This was the second time I’d caught these guys, who made black metal sound amazing, both elongated and ambient or primitive and raw.

It wasn’t necessary for them to move around the stage very much or make any odd moves for they kept rooted to their spots and steadfast as they howled and roared over the audible sea that was their output.

WITTR are that kind of band you must see to fully get what has made them so successful, and that is not just their amazing live shows, but the ability to entice the audience and leave them in a wondrous trance, fixated on the roaring decibels of tremolo driven guitars and machine-gun drumming.

Overall, this was WITTR doing what made them big and they have not faltered over the years. Nothing was disappointing about this performance, and I was up in the gods watching this, so if I can say that, these boys had left their mark on that stage.

The whole venue was now filling to the brim, as I could see by the number of people now seated around me in the gods. Everyone was excited, ready for the next act.

All the way from Finland came the blokes who breached the gap between death, doom and progressive metal: Amorphis. A band as intriguing and legendary as the Finnish folklore from which they take inspiration.

What a show, this was another remarkable example of how a band has worked hard to earn its success over 30 years.

Amorphis have never faltered in any of the years I’ve seen them, and this night was no exception.

Beautiful progressive riffs and catchy drums blasted round the Forum, evoking feelings of adventure and delight – Amorphis had captured that childhood curiosity that remains in the hearts of anyone who loves music about mythologies and storytelling, like what these Finns have produced for the last three decades.

It was beyond beautiful to hear vocalist Tomi Joutsen announce classic tracks to the audience, who applauded gracefully and had a good pit going to the more aggressive tunes.

Amorphis have gathered one very impressive and loyal following here in the capital from what I saw this night and they left the stage having won plenty of hearts and minds that I can see swelling the crowd at their next appearance.

A fabulous performance all round, which everyone in the Forum appeared to appreciate as it was completely full at this point, and very few people were moving from their spots for the highly anticipated headline act.

Dimmu Borgir (Icelandic for “The Dark City” if you didn’t know) appeared on the stage to a hoard of applause and cheers that would give an outdoor festival like Bloodstock a run for its money.

The stage had taken a while to set up, but it had all been for good reasons, for these Norwegian veterans of the symphonic black metal universe made full use of their elaborate presence.

From the moment he stepped forth, frontman Shagrath had every member of the crowd in the palm of his hand.

Twenty-seven years of making some of the best extreme metal had given him the ability to stare with intensity into the audience and hypnotise them into a trance of wonderment with his charisma.

Dimmu Borgir are indeed a charismatic band from what I could see, playing tunes from their latest release ‘Eonian’ and classics like ‘The Serpentine Offering’ to show the world that their changes in stylistic direction over the years have not badly affected their performances.

This was as brilliant as any veteran band can be, and like Amorphis, one I could see as deserving of all things they have achieved like headlining festivals and international best-selling albums.

The guitars and keys blended like a matured whisky and fired into the crowd like a hail of arrows let loose by a band of brigands.

As it came to the end of the set, I knew nothing could stand in the way of this band, for they had made it and had won over the likes of many fans who might have doubted their position in the world of black metal – myself included.

Dimmu Borgir delivered their set with strength, agility, stamina, charisma and aplomb that told me they are just as evil and wondrous as their non-symphonic brethren.

A mesmerising performance all round, and I hope to see Dimmu on the road again soon.