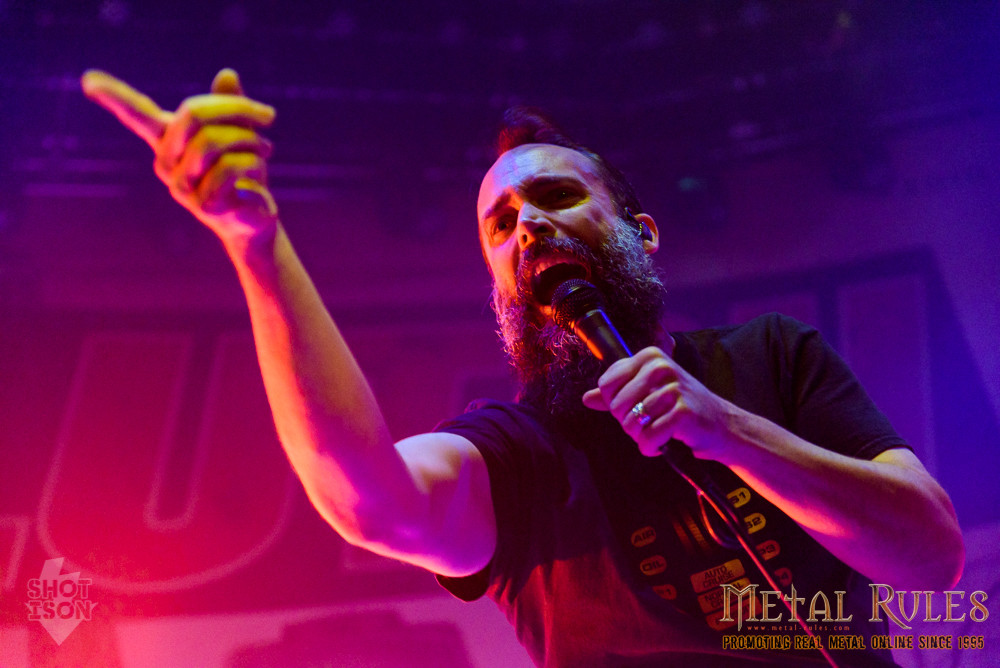 My last “big gig” of the year, and one I had been looking forward to for a while. Clutch were back in the UK and were bringing Graveyard and Kamchatka with them to a packed Roundhouse in Camden, London.

I don’t think I had heard of Kamchatka before tonight, which surprised me as soon as they started I thought, “There’s some tasty grooves going on”. I was shooting the first few songs so wasn’t paying much attention to my ears, but once I was back with the regular folks I could get into it a bit more. They recently released their first album since 2011, so their set featured a few of those newer numbers and I liked what I heard (although the whole was all new for me).

Bluesy hard rock with pretty clean vocals and a few flourishes along the neck of the bass is a cool way to start the night, especially when the occasional bluesy extended guitar solos in a few numbers rang out. Numbers like Mojo Hand about 5 numbers in added a bit of a tougher edge that I really liked. It even got the early entrants to participate with some clapping along.

Jean-Paul Gaster of Clutch came out to play the drums on a King Hobo number too, which was a pretty cool moment to wrap up their set. King Hobo’s sound isn’t too different to Kamchatka, so it slotted into the set quite nicely with some toe-tapping beats.

Things got a bit smoother, but still with those bluesy vibes, as Graveyard breezed through their set. Really like these guys, though I didn’t really like the lighting though as I shot the first few songs. Hazy silhouettes ain’t my bag, but the sounds were alright. The vocals always have a raspiness that gives a bit of texture to the relatively clean tones of the instruments.

At times the fuzz and tempo ramped up, with numbers like Hisingen Blues, and considering the headline act it’s no surprise those numbers got strongest responses in the set. Ending with The Siren was a good choice too, as it’s a great number and probably their most well known. They played it slightly different to the album version (which is what I like to hear) and amped up a little bit to lead us into the break before the Maryland riff slingers could blow our ears out.

Clutch are a brilliant band with an extensive back catalogue. I was fortunate to see them at Brixton last year, however, there were some serious sound issues, with an entire PA stack being switched off as it kept buzzing loudly even when no signal was passing through, so tonight I was looking forward to shooting them for the first time and also being right at the front for maximum volume!

Thankfully, I wasn’t disappointed with the sound, being right at the front for quite a while, which was good as the Roundhouse can sometimes be a bit hit or miss. I got my shots and loved shooting them, singer Neil Fallon, in particular, is great fun on stage and manages to produce his signature vocals with seemingly little effort and plenty of facial expressions.

The crowd were up for it too, with plenty of nodding and singing at the front and plenty of crowd participation during Weaponised Funk. Further back I went to get some wider shots and noticed people dancing and having a bit of a party vibe near the bars.

Per Wiberg from Kamchatka hopped onto the keys for 10001110101, which everybody recognised the second he began playing that electric organ opening chord, and the grooves of that number also got people dancing nearer the back! Per Wiberg would play in a couple of other numbers too and Thomas Andersson joined in for Ghost towards the end of the set.

Like much of tonight the mood was more like a party for the most part as the set was filled with upbeat and popular numbers. Even Spacegrass didn’t make the cut, which surprised me a bit but looking at the setlist it might have messed with the flow of the set, or there just wasn’t time for it.

A short break after The Face before the encore of Electric Worry followed by their recent cover of Fortunate Son, which is a cracking cover and was a good one to finish the night off.