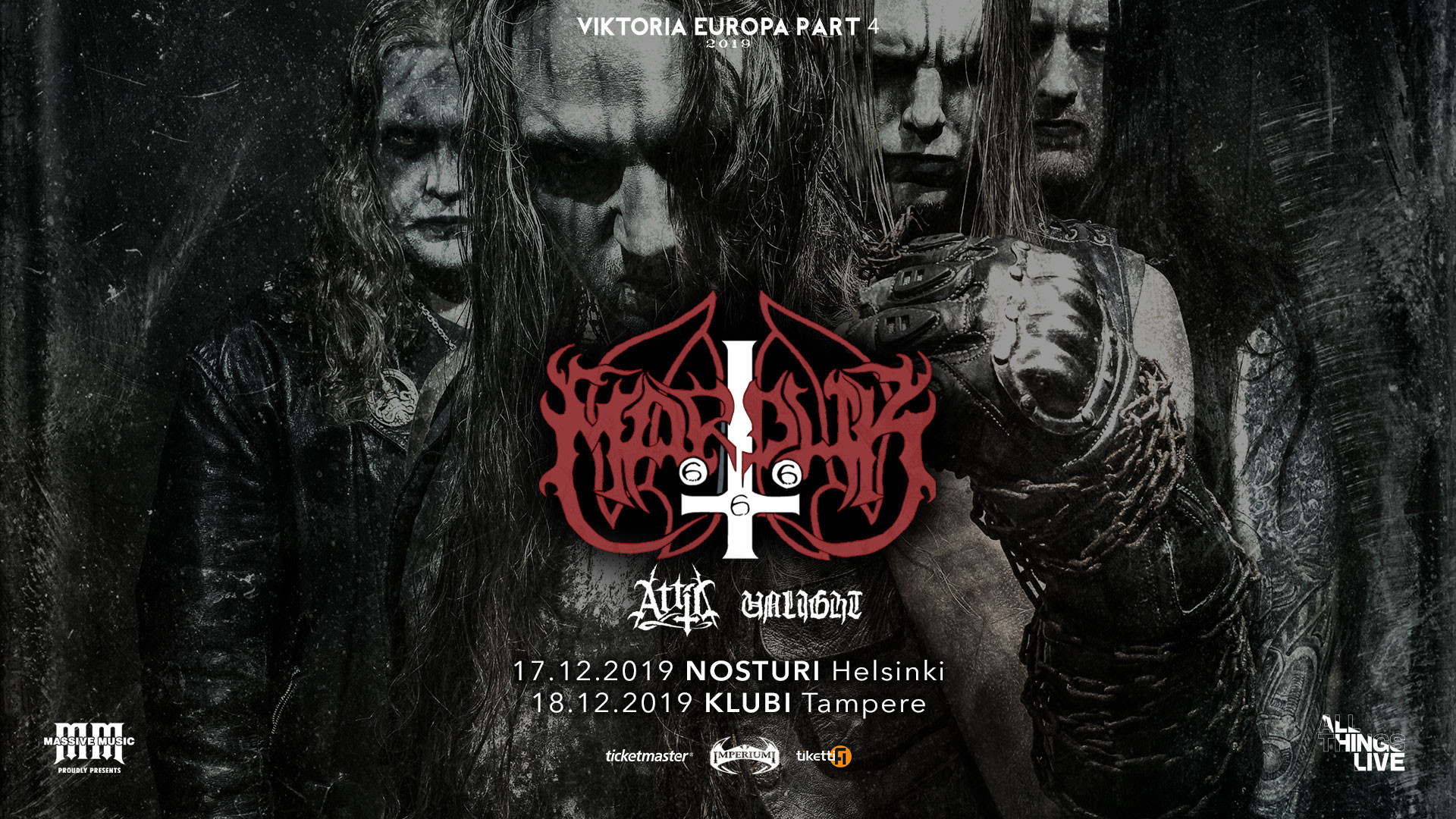 A black metal gig before Christmas is a perfect way of ending the intensive gig/concert year. The long-time black metal squad Marduk has regularly visited Finland at various underground festivals and played on gigs of their own. Marduk hit the Finnish soil with support acts from Germany – Unlight and Attic. The four piece’s latest opus VIKTORIA proves the artillery of Marduk ain’t getting rusty. It was delighting in seeing a bunch of the younger generation rioting in the pit. The new generation of the extreme metal is born, when these younger black metal maniacs were cheering the old Marduk classics.

The German black metal outfit Unlight opened the night by doing 30-minutes of grim sounding yet a bit of melodic sounding blackish metal. Unlight’s stuff isn’t that brutal and raw compared to Marduk’s harsh approach. Unlight’s black metal had elements from the old school approach and as well in their visual look. Even though Unlight has several albums under their belts, the audience appeared to be unfamiliar with Unlight’s material. The crowd politely followed and enjoyed Unlight’s performance. As a result, the band performed with the routine grip and thanked the audience and left the stage.

Another act called Attic, also from Germany, had dragged candelabrum and other properties onstage to create some kind of mystical as well as occult atmosphere. The band has outspokenly taken the significant parts of their influences from King Diamond and above all Mercyful Fate. Frankly it definitely sounded like the old Mercyful Fate. The double guitar working and high pitched singing were reminiscent of some Mercyful Fate songs. Damn the King Diamond/Mercyful Fate elements kept popping up all the time when watching Attic. Was it good or bad, well the crowd seemed to dig them a lot. Why not, as the German metallers had a great show and driving vibe onstage for the whole gig. The band drew more interest from the Finnish crowd.

The black metal squad Marduk led by the sole member Morgan Håkansson has kept spreading the death darkness and destruction for about 30 years. Despite several changes in the line-up Håkansson has tightly hold reins of Marduk with the relentless attitude and vision. Marduk has not lost an inch in the brutality and savage approach, instead new elements have been brought to the music, but they have made them even more brutal and straightforward. Marduk swarmed the darkness and death with the cruel grip onstage. The four-piece literally hammered the audience down with the one hour set. Marduk is always barbaric, nihilistic, so there was no exception. In the mid of the gig, the band kept a short break to gasp for some air until they kept whipping the audience. But But the guys have loyally performed the same setlist by repeating the same songs all over again for a while by now. Of course their gig at Steelfest was an exception as it was a particular set/gig, focused on the PANZER DIVISION MARDUK album. It would be about time for them to revamp the setlist a little bit. The 60-minute utter madness of the barbaric black metal was started by “Panzer Division Marduk” and followed by “Baptism By Fire”. The set consisted of the material off from the latest output VIKTORIA and the older material such as “Burn My Coffin”. It would be fabulous to hear songs in sets from for example HEAVEN SHALL BURN. Creating setlists to please everyone is always a nightmarish task for bands for sure. Marduk has crisscrossed the world for decades, but their neverending rage onstage and intensive in their performance and playing is admirable. The four-piece didn’t show any weak moment, despite some breaks. The singer Mortuus had a full of adrenaline and rage to burst out in his performing. Both Mortuus and Hakansson were the dominating persons the stage, whereas the bassist mostly focused on playing. As stated in the opening paragraph, it was superb to see underaged kids in the pit. Black metal hasn’t become the mummified form of metal only for the mid-aged metalheads. Black metal seems to attract to the people of the different ages, seeing the new generation on the gig was more welcomed.