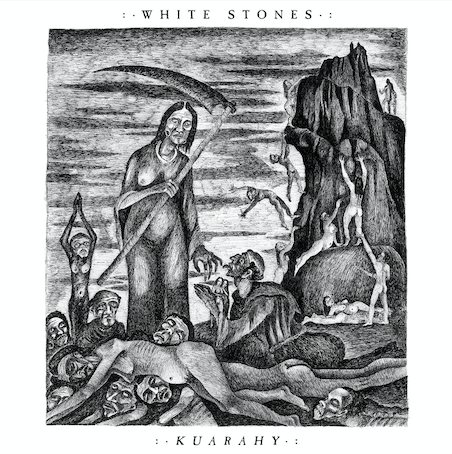 From Martin Mendez, bassist of the ubiquitous OPETH comes WHITE STONES, a solo death metal project. Today, they proudly announce their signing with Nuclear Blast and reveal, that their debut album named “Kuarahy” (pronounced Kwa-Ra-Hee) will be released early next year, on March 20th!

Martin Mendez comments about the signing: “I feel very proud to release this album and being part of the Nuclear Blast catalogue couldn’t be better!”

„It doesn‘t happen very often, that when a manager is coming to the office to discuss matters about a band and then says: ‘Would you be interested in listening to this? A new band I am working with’. Well if the manager is Andy Farrow, you know that this has to be good! Already after listening to two songs, we knew that this was special and that we wanted to work with this band! WHITE STONES is the perfect band for you when you are into old OPETH and MORBID ANGEL; looking forward to unleash this beast“, says Jaap Wagemaker, A&R Manager at Nuclear Blast.

The creative process for WHITE STONES’ debut album “Kuarahy” began during a year-long break OPETH took after the Sorceress tour, as a means of unwinding by exploring new avenues of creativity. Initially that’s all it was ever meant to be. “I’ve always written music at home but never had the confidence to do anything like this” says Mendez, “I never wrote a song, never presented something I wrote for Mikael (Åkerfeldt, Opeth singer/songwriter)” he continues. “I didn’t have any direction, I came up with the first song for fun. WHITE STONES has nothing to do with OPETH, I see no relation between the two. I played “Kuarahy” to Mikael a few months ago, he really liked it and was happy for me. Everyone in the band has side projects, it’s important. We tour so much you can become consumed by it; it has been really nice to do something different. WHITE STONES has renewed my strength and energy.”

Named after his birthplace in Uruguay, the record represents a return to his roots, both familial and musically.By exploring the forgotten paths of his ancestors via the style of music that remains his one true love – death metal. “I feel strongly connected to Uruguay still,” he reflects. “I wanted to write music related to that – the sun on the Uruguayan flag I transformed into the WHITE STONES logo; there are a lot of small things that connect the record to that place. “Kuarahy” is the native Uruguayan people’s word for ‘Sun’”, Mendez comments.

“Kuarahy” was recorded at the Farm Of Sounds studios in Barcelona and produced by Martin Mendez himself, while Jamie Gomez at the Orgone Studios in the UK was responsible for mixing and mastering.