As Winter rolls in and Christmas approaches, BLOODSTOCK has been busy confirming yet more bands for 2020’s best heavy metal weekender, plotting daily festive competitions, preparing to launch this year’s deposit scheme, and even devising an early Christmas present, with a little help from Friday headliner, DEVIN TOWNSEND…

Back in September, BLOODSTOCK announced that DEVIN TOWNSEND would headline the Ronnie James Dio main stage on Friday with a very special, UK exclusive set. BLOODSTOCK can now reveal more details about that setlist… it’s down to you, the fans, to help decide it! Dying to hear a deep cut of STRAPPING YOUNG LAD? What about a favourite DEVIN TOWNSEND PROJECT classic?! Now’s your chance to have your say! We’ve added a huge list of songs from throughout DEVIN’s career for you to vote on, via a dedicated thread on BLOODSTOCK’s Facebook page at: www.facebook.com/bloodstock/. DEVIN will be watching and we’ll update in due course…
Not only that, BLOODSTOCK is very pleased to announce that the mighty SAXON will be special guests on the Ronnie James Dio main stage on Sunday! The NWOBHM legends recently released live album ‘The Eagle Has Landed 40 (Live)’ to celebrate 40 head-bangin’ years and word has it, have been in the studio with Andy Sneap working on new music too. Watch a clip of classic track ‘747 Strangers In The Night (Live)’ from the new live release at: youtu.be/Gq6VhHTYGq0. In this, the band have said to expect their biggest, boldest show yet.
Also joining the Sunday main stage line up, are ORANGE GOBLIN with their unmistakable heavy metal blend of stoner, doom, black, crust, and southern rock. After a 4 year wait, the London-based group released latest album ‘The Wolf Bites Back’ last year, and are revving up to celebrate their 25th anniversary in 2020. Treat yourself and hear the whole album on Spotify.

Fast-rising British metal beasts CONJURER join the main stage fun on Saturday. Described as “ultra-gnarly, monstrously heavy” by Metal Hammer, record label Holy Roar released their debut album ‘Mire’ to vast praise in 2018. See the video for ‘Thankless’ from that record at:  youtu.be/Ogjc5DzIRHE or hear it in its entirety at: youtu.be/anXfPhYjb9E.

BLOODSTOCK can also reveal that Thursday’s Sophie Lancaster stage headliners will be none other than Swedish hard rockers THE NIGHT FLIGHT ORCHESTRA! The Nuclear Blast signed band, who boast members of Soilwork and Arch Enemy amidst their line-up, are promising a new album for 2020 but if you’re not familiar with them yet, make time to check out ‘This Time’ from their current release ‘Sometimes The World Ain’t Enough’ at youtu.be/9QdHI0if_xk.

On Sunday, the Sophie stage welcomes Canadian power metal squad UNLEASH THE ARCHERS. Have a listen to ‘The Matriarch’ at youtu.be/fs8RUFS18g0, from their acclaimed last album ‘Apex’, or pick up their new limited edition ‘Explorers’ EP which includes two special cover songs and was released by Napalm Records in October.

Don’t forget!! Sunday 15th December is the last day to snap up standard weekend tickets with early bird discount, if stocks last until then! On Monday 16th December, standard weekend tickets will move from £130 to £145; keeping the price the same as 2019’s event. A very limited number of VIP ticket upgrades will also go on sale on the 16th. Don’t hang about if you want to grab these!! Get tickets at the ticket store.
BLOODSTOCK’s ever popular ticket deposit scheme kicks off at 9am on December 20th, allowing you to spread your standard weekend ticket purchase over 5 instalments. You can sign up at any time until February 28th and will make your first payment of £29 + booking fees straight away. After that, payments break down as follows: Payment 2 – £29.00 (debited on 27/03/20), Payment 3 – £29.00 (debited on 27/04/20), Payment 4 – £29.00 (debited on 26/05/20), and then your Final Payment – £29.00 + postage (debited on 26/06/20). Please note VIP and child tickets are not eligible for the deposit scheme.

In other BLOODSTOCK fun, as 2020 marks 20 years of BLOODSTOCK, instead of ‘12 Days Of Christmas’ competitions, BLOODSTOCK is having 20 and they’re already underway! Don’t miss out – visit www.facebook.com/bloodstock/ every morning for details of each one-day-only competition, and be in with a chance to win all sorts of prizes from BLOODSTOCK bands past and present, festival sponsors, and of course BLOODSTOCK! 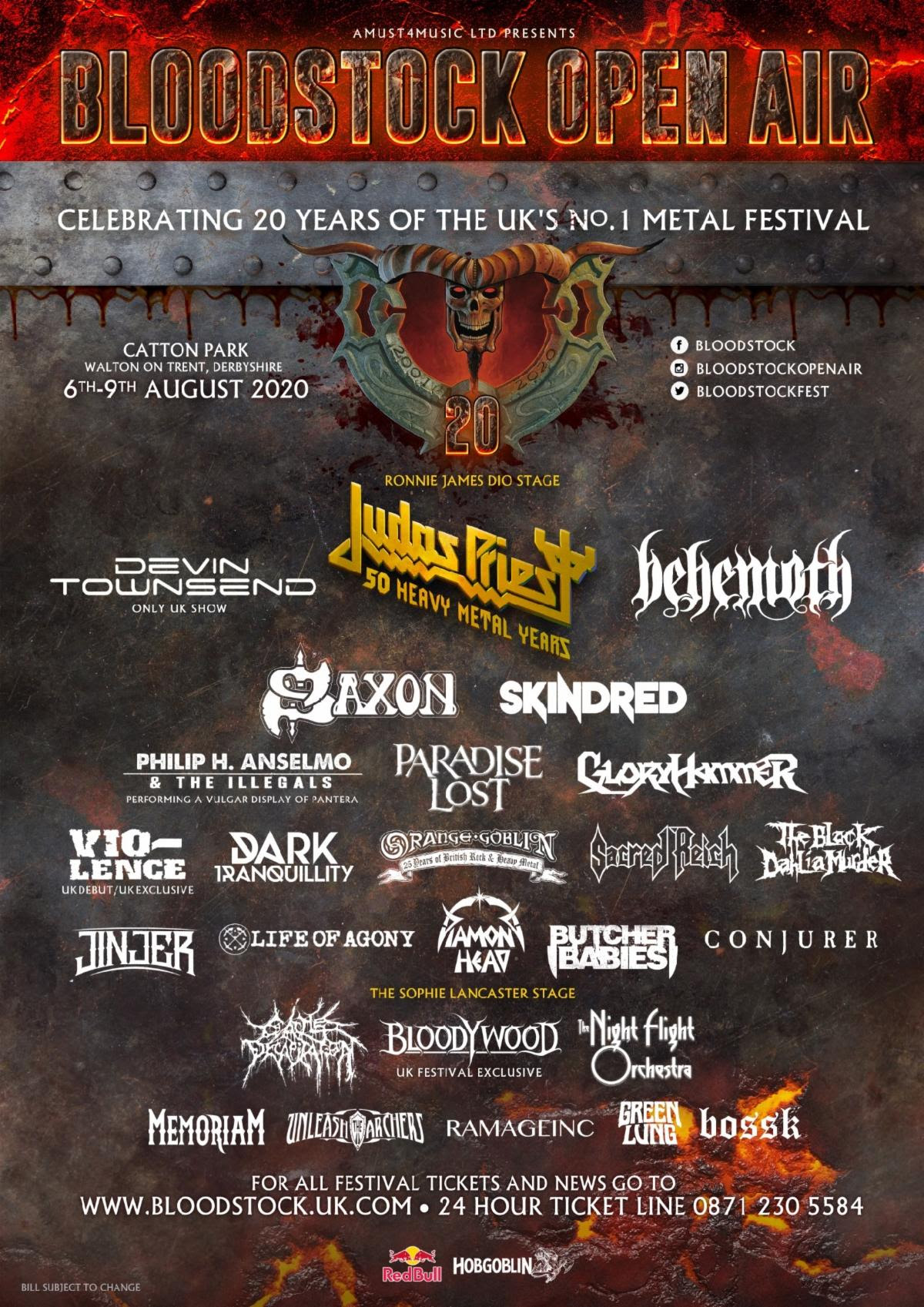