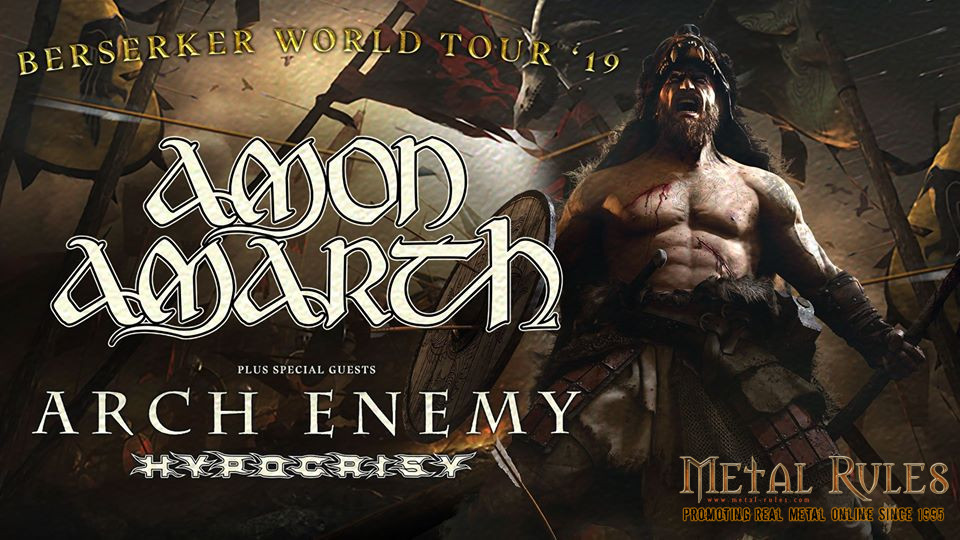 The Brixton Academy was never a great venue for any event, with the overly suspicious staff and the undersized amenities that the venue provides. But alas, the crowd surged inwards regardless. Security staff at this venue once again demonstrate how not to deal with large groups as they shout and blunderingly deal with the large crowds of tonight’s sold out show.

As a lineup for tonight though it’s a string of classics of their own scenes. Amon Amarth are on the prowl this years as part of their Berserker World Tour which has been touring, with great success, around Europe. Alongside them are Arch Enemy with their death-tinged extreme metal. Last but certainly not least is the amazing Hypocrisy, recently back on the scene after many years of hiatus and bringing with them all the fury and power of their entire blistering career.

This is one of my all time favourite bands, I was actually at the event to see them more than I wanted to see the headliners!

Hypocrisy is a band I grew up on, probably what got me into death metal and one of the pioneers in this genre. Some people might not know it but Peter started this band as a solo project in 1988 which became Hypocrisy around 1991. Their sci-fi themed songs and their style was different from anything back then, and still is!

Sadly only half the crowd turned up for these titans of melodic death metal. But they played a near flawless set, with vocalist Peter Tägtgren doing a fantastic job for the entire set they put on some of their old stuff and some of their newer tracks. I was waiting for the moment they would play Roswell 47, which they finally did by the end of their set.

Those in attendance were in for a great treat though as the recently reformed beasts pulled out all the stops with great presence and more importantly, purely indulgent aural carnage.

A great cheer went up as they finished their set.

It was a packed floor, with singer Alissa giving a full-throttled performance as always, surging through a set-list of their past catalogue new and old alike.

It was more leaning toward more recent material however. The sound felt a little on the quiet side for a gig of this size but that could be put down to to venue rather than performance.

Alissa’s banter felt a little contrived at times, asking everyone to jump up and down to the beat of “No Masters” especially felt unnecessary, yet it was adhered to for a full ten seconds so there’s that, kind of.

The crowd has been clapping and shouting along to lyrics the entire set, and it being a rather packed venue it could be said that that’s no mean feat. But this lot have been performing to packed out shows for a few years now so that should not really be a surprise to anyone.

The stage setup was very much in the shadow of what would become Amon Amarth’s show, with giant drum-kit and ornaments shrouded with black cloth as Arch Enemy cavort about the reduced stage space.

The lighting was quite impressive with a great collection of strobes, blue light bars and dancing spotlights choreographed well to each song. But this being such a prominent concert, such things should be standard really.

Surprisingly, the crowd gave little if any reaction to Arch Enemy’s more classic hits such as “Nemesis”, barely even registering the song enough to fist pump along to.

It seems that many fans of this act are more casual listeners perhaps? Who can say. The band themselves make a great performance, out of the song that really put them on the extreme metal map though, headbanging away and playing a fevered speeds with vocalist Alissa doing a great job filling Angela Gossow’s angrily pointed shoes.

The show ends on that elaborate sign, with singer and band bowing, throwing out picks and set lists.

Setlist: Intro: Set Flame to the Night / The World Is Yours / War Eternal / My Apocalypse / Ravenous / Under Black Flags We March / The Eagle Flies Alone / First Day in Hell / Saturnine / As the Pages Burn / No Gods, No Masters / Dead Bury Their Dead / Nemesis / Enter the Machine [tape]

Between shows the crowd is largely happy, although queues are big for toilets, bars, and smoking area alike with security staff being largely at a loss to organise any of it.

A great performance, with really great chemistry between audience and band. Amon Amarth know what they’re doing and they do it well.

The music itself is well tuned and played exceptionally well, with vocalist Johan Hegg belting out an amazing set.

The crowd are lapping up their presence too, chanting along to each song and pumping fists the entire way through!

At one point singer Johan wields a fireworks-filled Mjölnir which spat sparks at the ceiling with fireworks shooting down in return, so a very well choreographed pyro set indeed, been taking pointers from Rammstein maybe?

The entire crowd was jumping to the beat as ordered by Johan at one point, generating too much heat given the crowd size.

A fully geared-out Viking duel ensues during First Kill to the great amusement of the crowd as the band take a step back away from the flashing iron.

The set was incredibly strong, which comes as no surprise really given Amon Amarth’s stature and deft hands on the touring front.

After many fireworks and much on-stage malarkey, the final cheer at the culmination on their set was aggressively impressive as the entire crowd raised horns and Johan beamed out in sweaty glee.

While the night took some time to come into full fruition, for the fans gathered here it was an amazing experience.

Setlist: Intro: Run to the Hills (Iron Maiden song) / Raven’s Flight / Runes to My Memory / Death In Fire / Deceiver of the Gods / First Kill / Fafner’s Gold / Crack the Sky / The Way of Vikings / Prediction of Warfare / Shield Wall / Guardians Of Asgaard / Raise Your Horns / Encore: The Pursuit of Vikings / Twilight Of The Thunder God