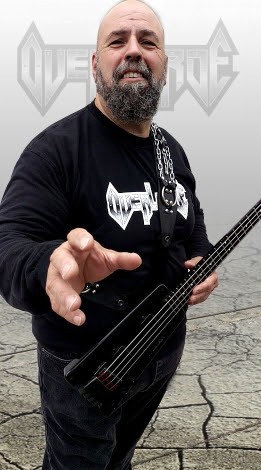 2019 began with Overlorde making great progress on the new album. But then things took an unexpected turn in June. And now, Kong has returned!

With bassist Bobby Devlin, who came on board in May 2018 after the unexpected January 2018 departure of co-founding member John “Kong” Bunucci, the first half of 2019 saw the band wrapping up the songs for the new album. But in June 2019, things took an unexpected turn. Bobby Devlin had to step away from the band.

As it turned out, Kong was ready to resume his position at Supreme Command headquarters. Some phone calls were made, and come late July, John was back in the fold. He immediately got to work recording bass for the new songs. His bass playing and approach has been a substantial part of the Overlorde sound ever since 1985, and John immediately took the new songs to a “Kong” worthy level.

Please join George J, George T, and Mark in welcoming Kong back. The band also sends its thanks and best wishes to Bobby Devlin. All the best to the Bass Beest!

And speaking of the new songs, the band is happy to report that all the songs have been written and recorded. Ten killer songs dealing with history, fantasy, and the human condition.

When Kong left in January 2018, the band put record label negotiations on hold. With these new developments, Overlorde is ready to resume those negotiations and looks forward to releasing the new album in 2020.

Overlorde welcomes hearing from any interested record labels, even those that were not in a position to express interest in 2018. Interested parties can reach out to contact@overlorde.com.

“Across the sea amidst the horizon. Overlorde forever binds us!”
Mark, George, George, and KONG! – Overlorde