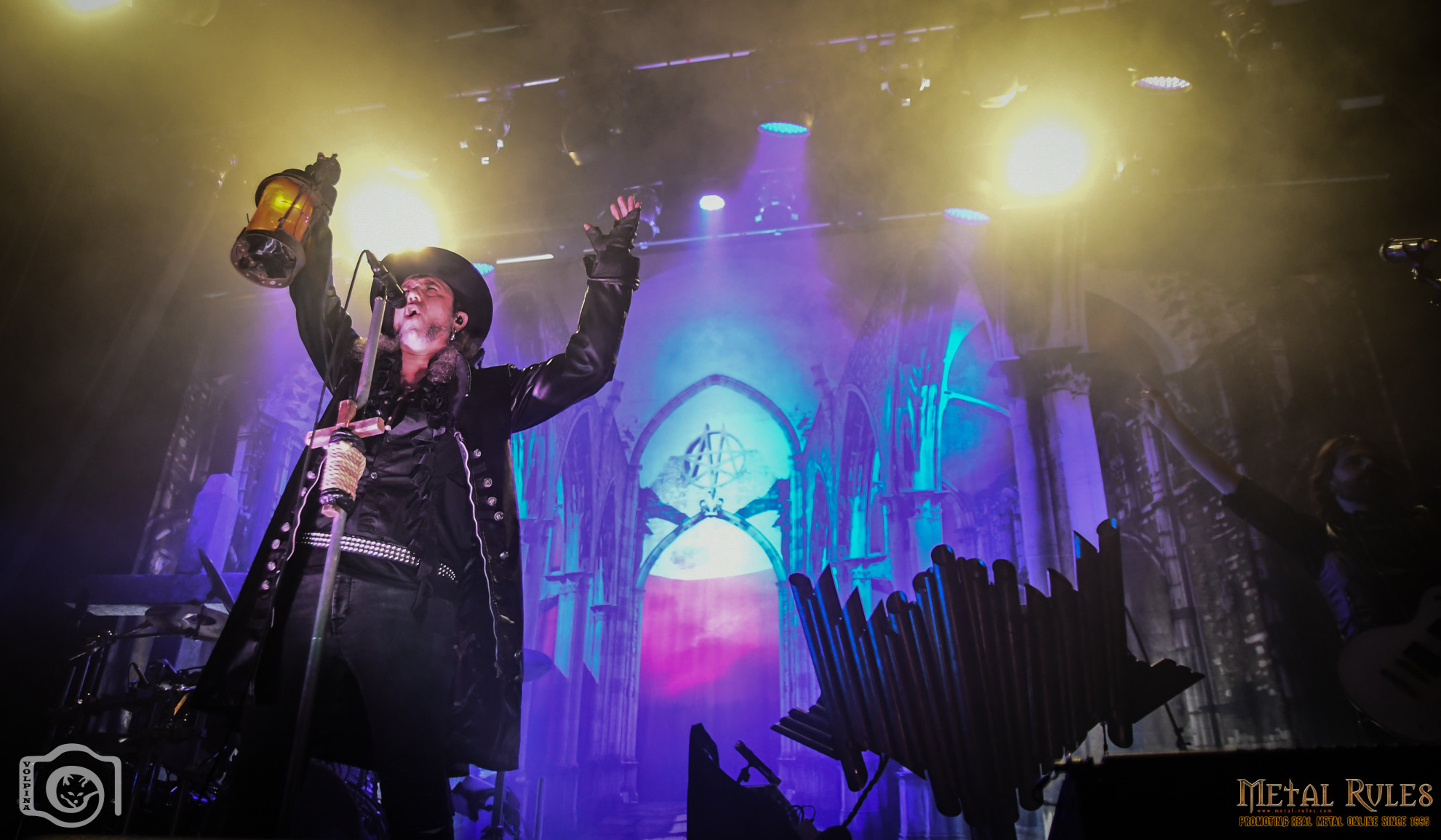 An outstanding celebration of the weird and wonderful from the world of European gothic and melodic black metal was staged in London tonight, as Portugal’s quintessential metal band, Moonspell, graced the stage of the Islington Assembly Hall.

Alongside them were Greece’s biggest and most famous metal band, Rotting Christ – both of whom were in town to celebrate the release of Moonspell’s biography: “Wolves Who Were Men” through Britain’s biggest metal publishing house Cult Never Dies; written by Dayal Patterson.

The Islington Assembly Hall is a venue with a long past of live performances and looks to the average Joe like a Victorian theatre, an ideal place for a performance by bands who love to use history and mythologies in their lyrics.

Large crowds had poured in by the time the first act took to the stage: Silver Dust from Switzerland. A band this critic could best describe as…odd.

Silver Dust was mysterious and confusing simultaneously, and not in a good way I’m afraid. The stage was decked out in mirrors giving a fairy tale concept, but the band were dressed in a steampunk manner that had lashings of Abney Park, so it was hard to tell if this was a gothic, symphonic or steampunk-themed band.

They played on through a series of tracks that all sounded different and weren’t memorable so I’m afraid these guys didn’t bode well on the musical front.

Stage show would’ve seemed more appropriate because the frontman played a guitar solo that involved the neck of his guitar lighting up like a Christmas tree and had me laughing, as were several other revellers around me.

I felt this band were being too theatrical for their own good as I can’t recall any catchy riffs or melodies from their performance, just the silliness of their over-the-top novelties like a mirror showing a vampire one minute and a first world war French soldier the next.

Silver Dust is worth looking up if you like theatrical bands, but for me, it was a mishmash of Disney style fantasies that robbed the Swiss of their musical attributes.

Despite the confusing nature of the first act the crowd had piled in, almost filling the Assembly Hall to full capacity, ready for the first major band of the night.

Rotting Christ, the band who put Greece on the metal map all the way back in the late 80s when they started with angry political grindcore and then moved into the realms of black metal with their unique take on the genre.

With over 30 years of touring under their belt, the Greeks pulled no punches in taking to the stage and giving it all they had with the same precision, agility and stamina that made them stand above their peers so long ago.

The band were in town to promote their thirteenth album, The Heretics, released earlier this year. As with the last few times I’ve caught them this year, the Greeks opened their set with some new tunes from this very impressive new record.

Main man Sakis Tolis screamed, cried and bellowed the tunes from The Heretics and other albums from the band’s three-decade history, each linked in the melodic tremolo picking and raw, blasting percussion coming from founding member Themis Tolis.

One thing that makes Rotting Christ such a versatile band is their inclusion of songs from across their experimental history. They created Hellenic black metal and then went down a more gothic metal route and then made some mildly atmospheric sounds. All of which were represented in their setlist this night.

Rotting Christ were beyond amazing, and the crowd were certainly on their side with a good mosh pit going, and hyper joviality echoed around the room as the Greeks leapt from song to song.

It was sad to see them leave the stage when the set came to an end, but it’s highly admirable how a band with such a long and fruitful history can pull off a spectacular show after so many years of hard touring and producing new music.

The whole venue was now full to the brim with people jamming into the main hall and crowding the merch stalls as the final act of the night arrived.

Moonspell, Portugal’s biggest, most famous metal band who have spent the last 30 years on the road making a wide range of metal, ranging from folk-tinted black metal to theatrical gothic metal.

This night was a celebration of the band’s most theatrical works, particularly their 2017 studio album “1755”, detailing the earthquake that shook and destroyed the band’s hometown, Lisbon, in a scene of natural horror.

Such a concept would seem apt for a band who love history and macabre folklore, so it was a pleasure to see the band enter the stage dressed in period clothes that wouldn’t have looked out of place in Lisbon in 1755.

The audience applauded loudly and Moonspell began their magical tour into the macabre with all the magic a keyboard-driven melody can bring.

At first, the band showcased the finest of their recent album which went down a storm with the fans cheering happily. Then frontman Fernando thanked the crowd for coming down and took us on a trip back in time to the band’s 1996 album “Irreligious” with its most famous track: Opium.

Moonspell conducted a tour of their history with all the depth and heartfelt musicianship only a gothic metal band can produce, with vocals ranging from harsh to romantic, guitars sweeping and scraping through riffs to please more than just one area of metal and keys that were stylised as a church organ – something to add a truly gothic edge to all these Portuguese bards have put out.

Overall, this was a fun set that went on for a good length and had two excellent encore tunes that left everyone in the venue happy and pleased to have seen this band on stage.

I left knowing that Moonspell and Rotting Christ will come back soon as the devotion of the fans in London was stronger than ever this night. See you bards again soon.