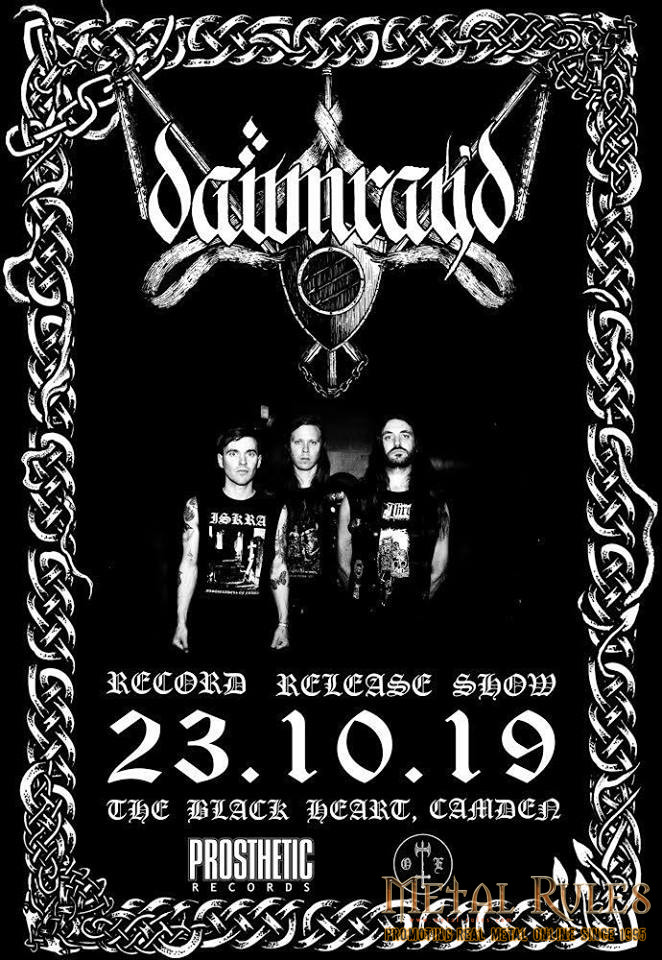 Politics and governance might not be the first themes to come to mind when it comes to black metal, and maybe not those of the far left if a band in such genre is known to be politically active, however a big challenge to this perspective was made in Camden Town tonight as the anti-establishment band Dawn Ray’d from Liverpool debuted their second studio album.

This was the first metal gig where I can recall seeing a bookstall of philosophy and history books by some of the world’s most famous thinkers and it added to the do-it-yourself atmosphere that hung over the Black Heart as I watched the first band get ready.

Hailing from Kingston-Upon-Thames, the opening act was the sludge-infused hardcore punk outfit Wound – a band who meant business the moment the first note rang out.

Anger, violence and brutal expression of opinion and personal views echoed as vocalist Luke Kempton moved about the already big crowd as the band chugged and swooped through each tune, setting them a little bit aside from the hardcore that has dominated the punk and crossover airways in recent decades.

This band would please kids from the punk side and the sludge side of the alternative music spectrum. If you’re familiar with such genres then Wound would most likely remind you of Black Flag’s mid-period when they experimented with sludge and some mild thrash metal.

As well as being mad as hell and having loads of fun, Wound had the crowd on their side as each song was met with plenty of headbanging and cheers that wouldn’t seem out of place at a rally in the city streets.

On next was another band from London: Burning Vow, whom I couldn’t gather much info about but from their performance could tell you they would fit the bill at a stoner rock or doom metal shindig.

These blokes came on stage and began their flowing and crunchy take on the doom genre that did remind me a little bit of classic Black Sabbath and bordered on Dragged Into Sunlight at one or two moments.

Atmosphere rang well with the crowd who had now swelled to almost filling the room but on a personal note, I couldn’t find much to write home about with these guys as doom metal has never quite piqued my personal taste.

Granted, plenty of revellers in the crowd were taken in by their deep and hefty sways of bass, psychedelic inspired guitars and faraway vocals, but this critic – having seen this sort of thing countless times – came away with nothing more than having discovered another doom outfit that was mediocre at best.

It might not have pleased me, but Burning Vow received much applause from the audience so I must have been missing something there.

Anyways, onto the highlight of the show.

Dawn Ray’d, all the way from Liverpool and here to blast London with more than just some catchy black metal tunes. They were in town to promote their new studio album, ‘Behold Sedition Plainsong’, out now on Prosthetic Records.

This trio was the sort of band who did not just take their music seriously, they lived the lifestyle that comes with it. Vocalist Simon B was more than willing to remind the crowd of how this band’s politics meant living outside the system and challenging everything, including the status quo around the traditional black metal scene.

Utilising the simplicities of the music, employing one guitar, drums and an electronic violin, Dawn Ray’d let their anti-establishment screams blast into the now full crowd like a hail of arrows fired into an oncoming wave of infantry.

Drums pounded and roared like heavy machine gun fire and the buzz-saw guitar went well with the melodies of the wailing violin – this is a band to check out if you like those who employ the less conventional instrumentation.

The ferocity and audible carnage bellowed into the crowd in a way only a DIY show can deliver. Dawn Ray’d had brought all the serious attitude of a punk show to black metal showcase, which is why I will certainly not forget this gig in a hurry.

It was amazing watching these guys give it their best and I left knowing it’s no wonder Dawn Ray’d are going from strength to strength in their career. One looks forward to the next time these boys play the capital.