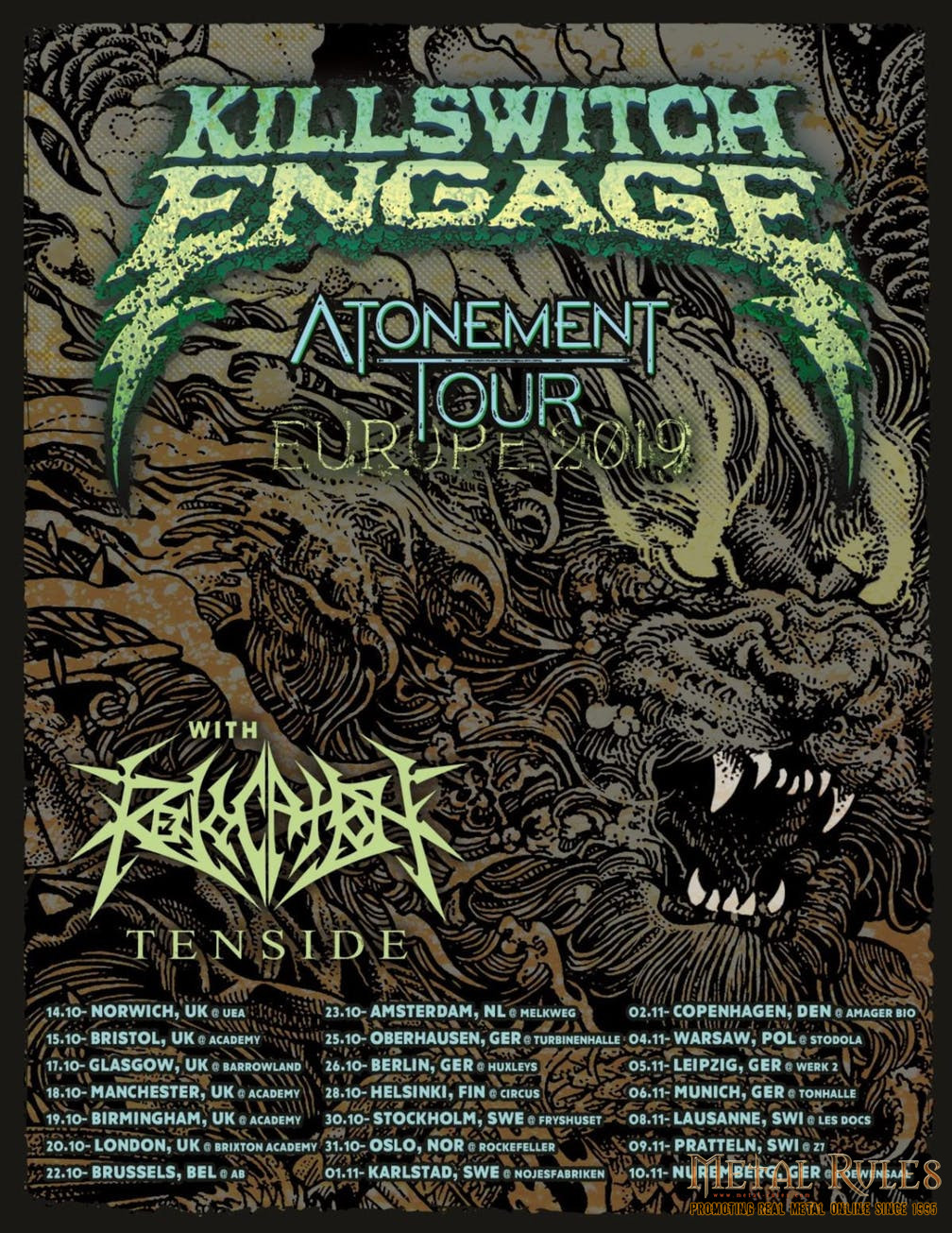 Supporting act Tenside from Munich, Germany opened the show for a Sunday evening of metal at the O2 Brixton Academy.

They are a very energetic band, highly entertaining sonically and visually. Vocalist-guitarist Daniel Kuhlemann has a very strong voice (arguably the strongest of the night) which could be always be heard over the music.

Throughout their set, an onstage photographer could be seen darting across the stage, often circling the band members. This was a little distracting, because instead of focusing on the performers, one’s attention would sometimes be diverted to the camera man running to and fro.

Drummer Johannes Jörg would occasionally spray water from his mouth during Tenside’s set which  provoked a mixture of comments from attendees – some were amused, others disgusted.

For “As Above, So Below”, frontman Daniel had only been on vocal duties, leaving Michael Klingenberg to be the sole guitarist on this song. Despite only utilising one guitar, the song carried the same strength as the ones performed beforehand.

In between their songs, yells of approval could be heard from the crowd, a significant amount of people clearly impressed by the German quartet.

After leading with “The Outer Ones,” frontman David Davidson made a charismatic introduction: “We are Revocation from the US and we came here to play DEATH METAL!!!”. This received an onslaught of cheering. Not a bad start for the penultimate band.

Having previously played Camden’s The Underworld back in December, they asked for a show of hands from those that had come to see them live for the first time, and dedicated “Vanitas” to their new fans.

Sixth track “Luciferous” went out to their tour mates and, of course, Satan.

Revocation’s final offering of the night, “Dismantle the Dictator”, went down a treat as virtually the whole standing section of the venue transformed into a mosh pit during its performance.

Being the heaviest sounding act of the night so far, Revocation set the bar extremely high. 1. The Outer Ones
2. That Which Consumes All Things
3. Madness Opus
4. Vanitas
5. Of Unworldly Origin
6. Luciferous
7. A Starless Darkness
8. Dismantle the Dictator

Then came the most anticipated part of the evening… the arrival of Killswitch Engage to the stage. The venue seemed a lot more packed out and the excitement level could definitely felt during the interval, with many standees trying to get as close to the approaching performance as possible.

For “My Last Serenade”, lead vocalist Jesse Leach leaves the stage for the first time as he sings to greet the crowd (to the security team’s horror), shaking hands with some of those in the front row while other fans grabbed at his arms and clothing.

Songs performed such as “Always” really displayed Jesse’s clean vocal ability, this one in particular.

“As Sure as the Sun Will Rise”, played live for the second time ever (premiering in Birmingham the night before), gained the band massive applause.

Fan favourites “Rose of Sharyn”, “My Curse” and “The End of Heartache” were very well received, the latter two songs hosting some of the wildest mosh pits of the evening.

“The Signal Fire”, the album version a collaboration with ex-vocalist Howard Jones, was dedicated to their old bandmate, a great display of amicability and professionalism between the artists.

During “Holy Diver” there were dozens of crowd surfers and failed stage invasions, which was very fitting. A few members of security looked quite exhausted after having to escort (and sometimes lift) so many people away from the stage area.

Judging from the lengthy applause, and after seventeen songs, it is safe to say that everyone left the Academy having heard more than a couple of songs from their favourite era of Killswitch.