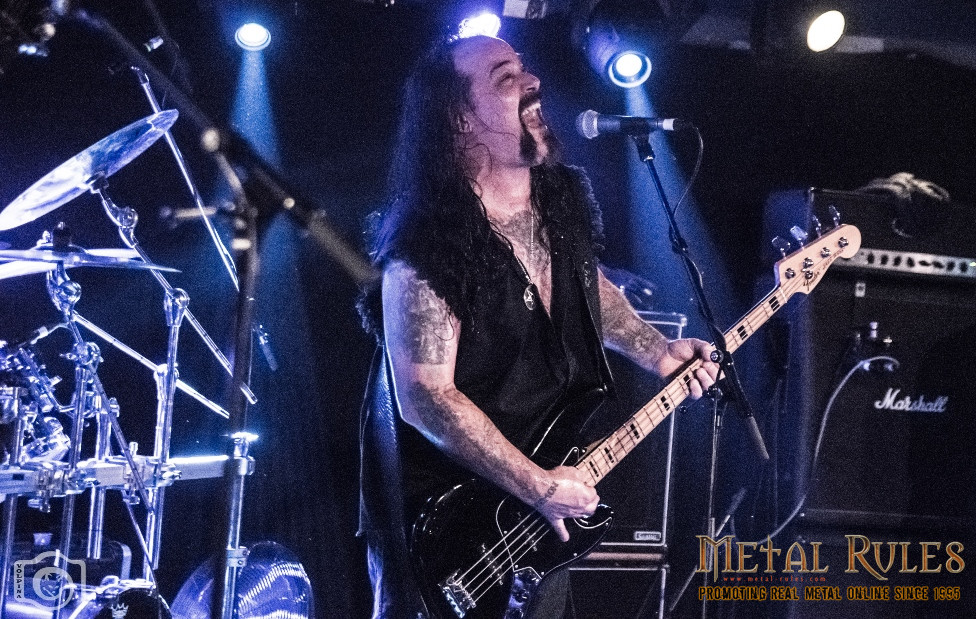 If you happen to be a death metal fan in Camden this evening, The Underworld has put together a real treat for you. Five brutally heavy bands from several corners of the planet have been curated and put together for an undeniably impressive line up of heavy music.

The doors are thrown open a little earlier than usual but this hasn’t deterred the faithful, who have turned up to demonstrate their loyalty to the scene and watch the opening set from London band, Anoxide. Straight off the bat, the five-piece prove to be a formidable group of musicians, setting an impressive benchmark for the evening with a sound that sits somewhere in the sweet spot between grisly old school death metal and something more contemporary. A song like Immortality Of Faith has plenty of weighty crunch, but the band have set it against a post-millennium barrage of machine gun drumming. I like it a lot and resolve to check out their recorded output as soon as I am done nodding enthusiastically to the riffs. Many appear to share my approval as the band are given a good response by the growing crowd.

At the end of Anoxide’s set, while the roadies make adjustments to the stage, I find myself noticing the ridiculous number of drums either set up on the stage or waiting in the wings. It’s a contrast to the usual arrangement where most bands would use the house kit until the headliners set up, and it’s a testament to the calibre of drummers this evening that they have ALL opted to bring their own instruments to give us the best of what they have to give. This is significant given death metal’s reliance on rapid, aggressive blast beats. Something that the second of tonight’s bands know all about.

Hailing from Egypt, Crescent are actually making this their London debut. They add a blackened element to their laser-tight metal and impress the room with a jaw-dropping performance. Fighting off the feedback to fill the space with some glorious noise, they pay tribute to the influence of their homeland, making use of some Middle Eastern ambience to add atmosphere to their generally relentless bludgeon. It’s an early highlight in the evening, but to be fair the calibre of entertainment has been excellent from the start.

Continuing the night with a sound that also veers into black metal territory are Damim. Taking the stage, bathed in red light, they delay the inevitable, holding the crowd’s anticipation with several minutes of ominous intro music. Once the band come crashing in, there is absolutely no let up. Riff after skull-cracking riff flash past in a room that, by now, is as close as dammit to capacity. Damim have everybody’s attention as ex-Akercoke bassist Nathanael Underwood (on guitar and vocals tonight) commands the stage from the front and centre while his bandmates play a ferocious and technically impressive set.

It’s a superb performance and it’s probably fair to say, even at this midway point in the evening, that The Underworld has excelled itself this evening. Hats should be taken off to the booking team. I feel like I could go home now STILL having had a night worth talking about… but there is even more to come.

Krisiun’s arrival is greeted with a cheer you would expect to be reserved for the headlining act. The dance floor is packed but people are still filing their way down from the bar, pushing forwards, towards the front. Eager metalheads are leaning in over the barriers to get a better look as the Brazilian brothers kick off a delightfully old school, thrash influenced run through some brutal material.

Krisiun have a long career from which to pick out a setlist and their song choices are enough to get a mosh pit happening. Glen Benton emerges from the stage door and stands behind the band, watching with stone-faced approval from the rear of the stage.

My overriding feeling while watching this penultimate set is how positive the room feels. There is something wrapped up in these riffs and the bands interaction with the fans that makes this feel like a party. It’s a great way to get warmed up for the last band of the night.

Deicide need no introduction. To say their contribution to the death metal scene has been significant is a huge understatement, and the band have very little – if anything – left to prove. This is most obviously felt in what appears to be an almost reflex response to the opening riff of Dead By Dawn. Suddenly the room explodes into a frenzy of headbanging and rowdiness; the sort that makes for a great heavy metal show.

Like Krisium before them, Deicide have a long career from which to pick their setlist and they do an excellent job of representing all eras of the band. Anyone who dug last year’s Overtures Of Blasphemy will be pleased to hear Seal The Tomb Below included at the halfway point, but the band clearly know the songs that put them on the map, so we get savage (and very welcome) renditions of Once Upon The Cross, Dead But Dreaming and Trifixion.

Throughout the gig, there is a steady stream of stage invaders, most of whom are quick to dive back into the chaos within moments of climbing out from the mosh. One particular punter out-stays his welcome, attempting to put his arms around Chris Cannella while he rips out a blistering solo. Benton spots this and gives the fan a hefty shove to send him back down where he came from. Cannella didn’t miss a note.

It may just be his onstage persona, but Benton seems unimpressed. It’s difficult to know if he is being generally aloof, or having a bad night. My guess is he’s just caught up in the intensity. He does interact, introducing the songs and throwing a few guitar picks out to the crowd, but there are some sound problems and occasional squeals of feedback seem to be a possible distraction. All of this does nothing to diminish Deicide’s incredible level of musicianship. The band are completely on point. Each song is delivered with precision and energy and matched in intensity by the appreciative crowd. Sacrificial Suicide is an inevitable highlight while Homage For Satan brings things to a breathless conclusion.

After the set finishes, there is a brief moment where the guitarists re-emerge and we think we are going to get an encore. However, they both give a shrug indicating it is not to be. They wave a farewell, the house lights come on and we are left to file out the venue with memories of a great show.