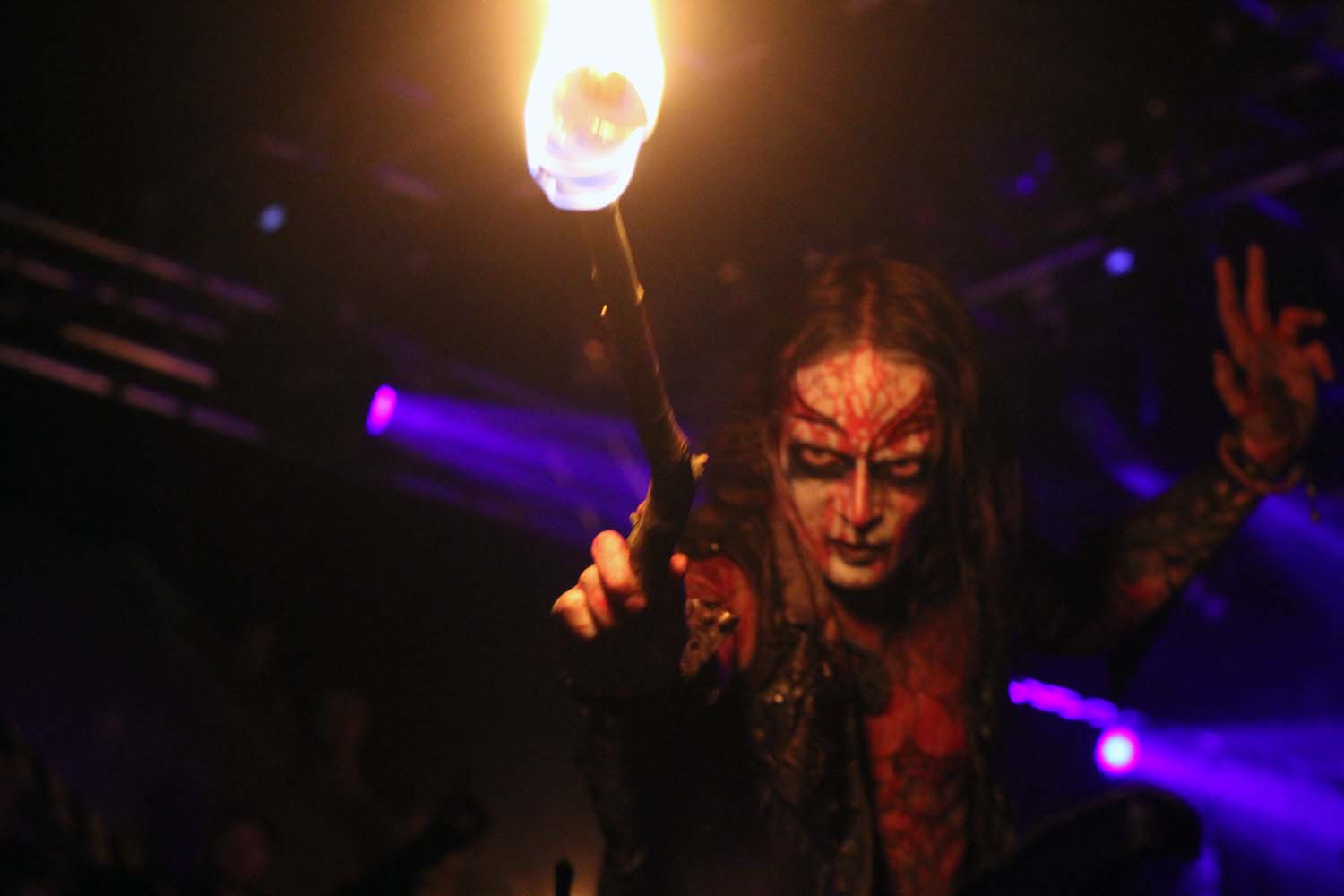 What a black metal fan is supposed to do on the Easter when the religious aspects gush through everywhere ?! The simple and easy way to sort out that problematic situation by going to witness Watain and Obnoxious Youth. This is how the Easter is supposed to spend.  Metal-Rules.Com joined in to spend the unholy celebration of Christ’s death in the Nosturi club. So did other 400-500 black metal maniacs who crawled to celebrate the ceremony offered and blessed by Watain.

The opening band called Obnoxious Youth, hailing from Sweden, was a relatively new acquaintance for the Finnish crowd. Even though the band has started out in 2005 and unleashed a couple of albums, but the audience seemed to be unaware of this greatness. Obnoxious Youth is pure filth, furious and uncontrolled black thrash approach with the punkish elements. However the riffs of a few songs were reminiscent of the old Maiden riff. The band was totally in fire at the stage. Their intensive and reckless performance was great to follow. The singer was a real restless duracell bunny as headbanging brutality and moving recklessly all around the stage. If anyone looking for extreme raw metal, Obnoxious Youth is a perfect choice. It was a mandatory task to purchase their merchandise after the set, as they blew the venue away.

Watain’s has always had quite a fanatical and intensive following in Finland. The Swedish black metal horde made first visits to Finland in the early of 2000 by playing in obscure places in front of die hard black metal fans. Watain has also caused some unexpected surprises for venues like bringing an old coffin with the full of rotten and disgusting smelling blood. However as Watain has stepped forward on the level of the success, the appearance and stage manners have been fixed and even cleaned more or less. The pyros and fire effects have  always been the part of the Watain gig as well as Eric Daniellsson’s ritualmanners.  Due to the limited room and above all the capasity of the club which of course set own strict rules how to use the pyros.

In the wake of the eerie sounding sonic hymn Eric and the rest of the Watain members marched on the stage with the flaming torch hold by the frontman. After litting pilot lights, Watain kicked the night off by starting with “Storm Of The Antichrist”. The set was followed by both new and old material from several albums. The whole band appeared to be in the extreme furious strike and offered a real intensive gig. The playing was razor sharp and tight. When Eric concentrated on the growling, other guys sacrificed themselves in the intensive headbanging.

Of course the indoor gig gave an entire different angle for Watain’s gig and performance compared to standard festival shows. Despite the lack of pyros, Watain’s rage and mercilessness could be felt and seen in the playing. As usual there was a ceremonial altar placed in the front of the stage, to where Eric knelt down several times. He picked up some kind of powder and threw that to pilot lights, causing fiery flashes.

The frontman Eric Danielsson was definitely psyched about the great respond of the Finnish crowd. His performance literally smelled like a rotting corpse and his vocals was pure grim sounding torment. Watain’s blasphemous hymns and riffs literally nailed the audience down as the floor area time-to-time turned out to be a warzone of pits. That was kind of odd, but the chaotic respond fitted more than well to the atmosphere. Above all the Bathory cover “Return” caused a ballistic reaction on the floor and on the balcony.

When the show was over, other members had already left the stage, Eric knelt down on the altar to make the final ritual manners and finally he personally thanked the crowd and left the stage.

Even though Watain has become quite a big name in the metal genre, they haven’t abandoned the true roots of black metal. The band definitely holds and maintains the true spirit of that particular genre. The Easter was definitely desecrated.

The Steelfest Organization deserve massive kudos for bringing Watain to Finland, even though there was all kinds of risks. Seeing the pleased and happy crowd was definitely a worth of every penny.