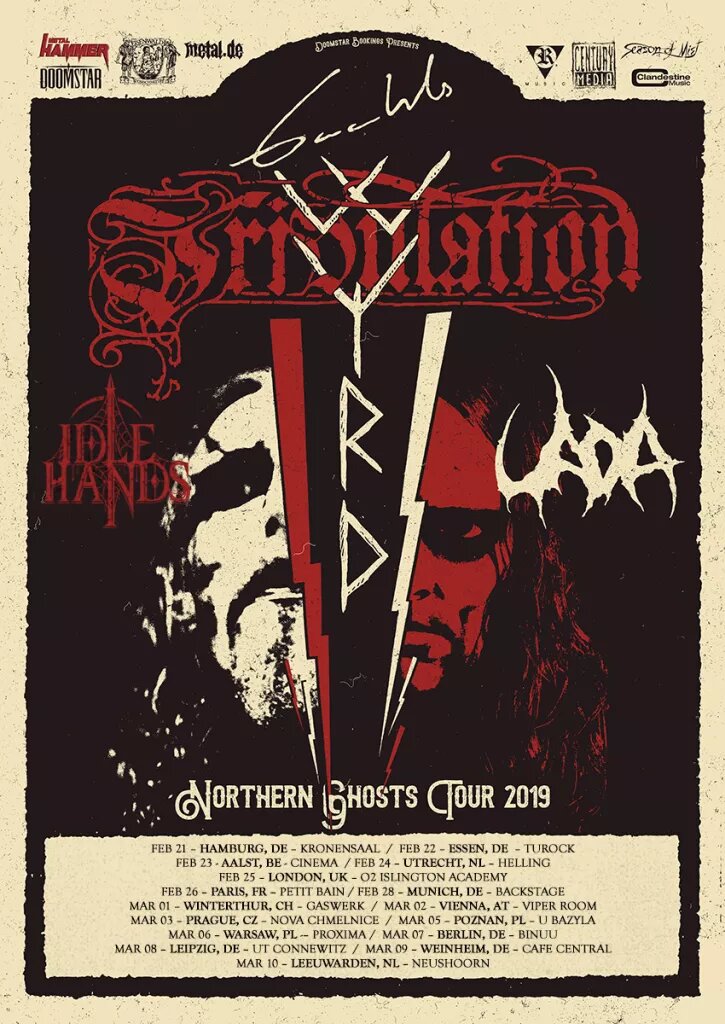 A celebration of all things black, death and Gothic metal came to London this evening, with the O2 Academy in Islington playing host to Gaahl celebrating his long and fruitful career, accompanied by some of the most impressive bands of recent years.

This gig was a slow starter, but the crowd was buzzing with anticipation as the doors opened. A decent number of revellers crowded right up against the barriers as the lights dimmed and the shadows crept down as the first act began their set. Idle Hands came all the way from Portland, Oregon, a place one would not immediately picture as a breeding ground for Gothic rock or traditional metal, but these boys proved that to be less than true.

A lively and ghoulish rendition of delightfully melancholic numbers sprung from these four young men, in the UK for the first time, as they told guitar driven stories of horror and personal problems.

Mixing impressive NWOBHM style guitars with the classics of Goth music from the early 80s, this critic could only describe Idle Hands as Gene Loves Jezebel meets Angel Witch. A fun mix if you’re into the stripped-down forms of rock and metal and cannot get enough of the darker side of life.

Idle Hands were easily having a good time playing; the facial expressions and energy were quite visible as they ran through these four boys, and the set climaxed and closed on a good tone.

Whilst I was impressed by Idle Hands and came away anticipating their return, it did seem as though the crowd hadn’t done their research on them, for many people were frowning and felt this band might have been too ‘traditional’ in sound for an extreme metal gig.

Nonetheless, Idle Hands set up a happy vibe for the O2 which was now filling up nicely with more metalheads who’d arrived in time for the second band of the night.

Uada, another band from Portland, Oregon, over their short existence have put said city on the US black metal map with their ferocious yet melodic shrieks about darkness and pagan themes. This, from their stage persona, was a band who pride themselves on ambiguity – for they wore long hoods concealing their faces and added to the darkened image they projected as their songs tore a whole new set of holes in the hearts and minds of the crowd.

Everyone was excited and yelling and screaming for more. As well as being loud and frightening to the common listener, Uada possesses a kind of audible magic to turn something so gut-wrenching and morose into something unconventionally beautiful.

A hypnotic myriad of sound danced around the room with the precision blast beats from drummer Josiah Babcock and Jake Superchi’s shrieking vocals uplifting many a heart like a Chaos Magick ritual where the practitioner reaches a euphoric moment of individual strength and agility.

It appears Portland has now given birth to a band one can only see as the driving force behind a new wave of American black metal that will fill the hearts and minds of a new generation of metalheads and give them the hope and strength to take on the world and keep the darkest of metal alive and well.

America is still alive and well on the extreme metal map and the crowd, which had nearly reached full capacity of the venue, cheered and cried for more as Uada departed. Seeing such appreciation for these young men told this critic Uada were going to be coming back again very soon.

The O2 was now swarming with folk all out for a good night of extreme metal and all the regular buzz of chatter filled the building as people milled around the merch stand and bar areas consuming all the right beverages and picking out what trinkets they wanted to remind themselves of the night’s events.

Setup for the next band took a little while but once the lights went down, the excited cries meant things were only going to get better.

Better was an understatement from the sound of the first note.

It was Scandinavia’s turn in this celebration of melancholia, for Tribulation, Sweden’s premier Gothic metal band with their mix of death, black and darkened metal instrumentation and aesthetic arose from backstage like a family of vampires arising from their tombs on Samhain.

If you are someone who digs the works of Sheridan Le Fanu, Mary Shelley and silent horror movies from the early 1900s, Tribulation is the band for you.

Dressed like the cast of Nosferatu, this was a band of Swedes who meant nothing but business for any kid who gains a kick from all things Gothic and spine-chilling mystery tales.

Darkness, horror stories and occult lyrics wailed from Johannes Andersson as the rest of the band expressed their excitement to play for the London metal scene by making full use of their stage presence.

Guitarists Jonathan Hulten and Adam Zaars were running and prancing about the stage expressing their musical credibility as well as a charisma that had the eyes of the crowd hooked from the word go. Tribulation had the whole of the venue by the neck with the proverbial fangs sinking deeper and deeper as the songs got more and more evil.

Imagine being dragged down into the mouth of hell with Lucifer in the opening stanzas of Paradise Lost, to be reincarnated as every vampiric cliche made flesh – wandering the ruins of Whitby Abbey; that is how you describe Tribulation’s performance.

This band were more on the harsher, more death and black oriented side of Gothic metal so it felt like a wide range of fans from across the metal genre spectrum were pleased beyond compare by Tribulation – the crowd’s cry for more grew louder and louder until it was time for the final applause as the Swedes stood together to get their gig picture taken.

Excellence all round for these boys from Arvika.

Sweden had shone nicely in a putrid manner, now it was time for the homeland of black metal to play host to the final act of the night: a man who has been playing Norwegian black metal since its inception in the early nineties and has branched out into a versatile range of careers such as performance art and painting.

Gaahl, former frontman of Gorgoroth, Trelldom and God Seed and founder of the Nordic Folk music group Wardruna arrived in all his satanic glory to give London another angry rendition of his best audible works.

He meant business from the word go, for Gaahl paced slowly on stage like a dark priest conducting a blasphemous ceremony that defiled all things sacred in the western world.

Music from his entourage, Wyrd, swelled and began rolling slowly and ambiently like a roaring fjord through the mountains of Norway – blast beats and tremolo picking cut right to the bone in the manner only the Norwegian forefathers possess.

Possession is the best way to describe Gaahl and his stranglehold on the crowd. His very low and ambiguous stage presence saw him pacing about the stage slowly as he screamed and growled into the mic and made eye contact with numerous members of the audience, making the sign of the devil horns to conduct his ritual.

By his behaviour, which this critic has seen at many a past God Seed or Wardruna concert, the audience could see Gaahl hadn’t mellowed at all in his 30 years of performance.

Each song was a number from all of his past bands and was played in a ferociously uplifting way that had my soul and body enlightened and warmed by the vibes conjured by black metal played to perfection.

Wyrd is not supergroup but a celebration of this versatile yet insane man’s long and fruitful career – putting Norway on the map of alternative music and culture, revelling in the country’s Viking and pagan past.

Composed of some excellent talent who could emulate the three major bands in Gaahl’s career, this was what you’d have if Gorgoroth, Trelldom and God Seed were all in the same room.

The audience was more than happy to hear the classics and celebrated both in a trance-like fixture on Gaahl and with screeches of delight and support for a man many look up to as a role model of Norwegian culture and music.

Once the last tune played and Gaahl’s Wyrd bowed before leaving, it was certain to this critic and the crowd who’d packed out the Academy that Gaahl was not going to drop off the black metal map anytime soon.

London is most certainly eager for Gaahl’s return.