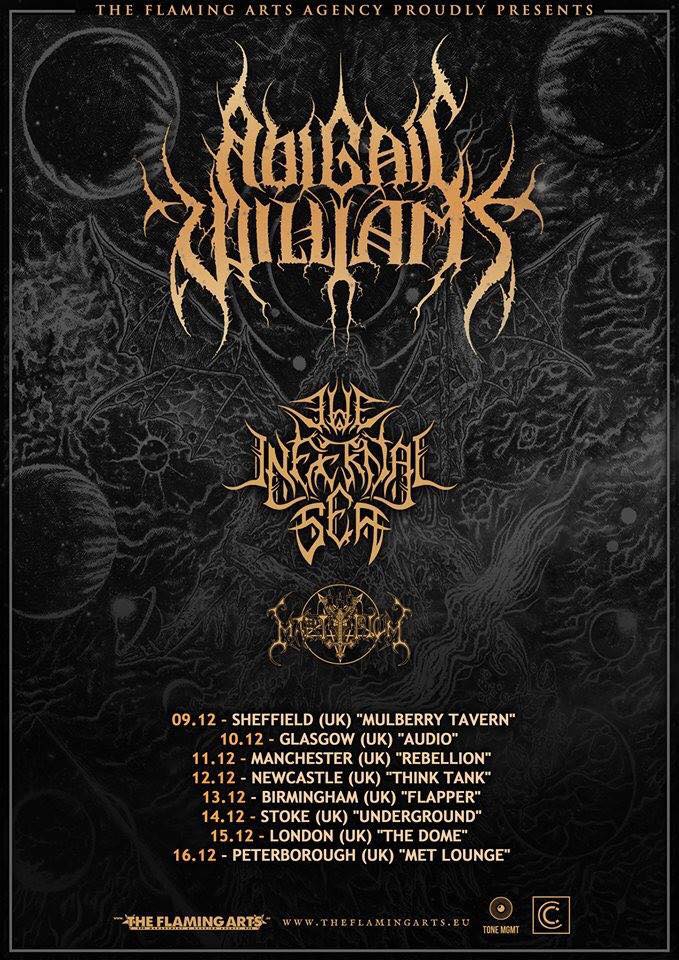 On this occasion, they were bringing an interesting couple of acts on the road during the UK stint of the tour. The opening act would be Martyrium from Malta who were an unknown band for me, but the billing also had one band that I was very much aware of in The Infernal Sea. The former have been around since 1999 and have four albums under their belt but this looks to have been their first foray into the UK. The latter were here in Glasgow a couple of years ago on the album trail promoting their sophomore album ‘The Great Mortality’ in support of Nargaroth. I was there that night and was immediately impressed with their performance. So much show that I had to see them again.

Firstly, Martyrium [2.5/5] were to open the night’s music with a meagre audience there to greet them. They didn’t look too satisfied with the sound check but proceeded to start a few minutes later. The opening track was fairly rapid and was heavily enlarged by the symphonic backing track. They were all suited and booted with the instrumentalists garbed in some padded ninja ensemble which wouldn’t have looked out of place in Shredder’s Foot Clan. Lead vocalist and fairly recent addition to the group Mikaela Attard was in some leather and spiked BDSM suit with a long flowing robe and a horned mask. It didn’t leave much to the imagination and the music didn’t really either.

Mikaela Attard was the star of the show as she had quite an impeccable range from the high rasps to the low gutturals, which she could also alternate to clean vocals, be it spoken or more operatic, when the song called for it. The main issue was that a lot of the guitar parts weren’t fully audible or just weren’t worth much attention. There weren’t many riffs but there was a lot of muted chugging with some open chords, so the guitar parts were more simple than anything and their seven stringed guitars weren’t really being explored fully. There weren’t many people there to see it all but there wasn’t much going around to be impressed by at this early stage in the evening.

Next up was the moment that I was waiting for as The Infernal Sea [4.0/5] came on and opened with one of their more recent tracks in ‘Agents Of Satan’ from last year’s EP of the same name. It was a pretty punky number with a rather simple drumbeat which rapidly gets more and more skilful and punching. The green lights, smoke and lanterns at the front of the stage were all building the atmosphere as the band members who were cloaked and masked were commanding attention. The long and twisted plague masks of the guitarist and bassist were a bit gimmicky but gave a rather creepy aesthetic to the band, but it is the music that I was concentrating on. ‘The Great Mortality’ is a cracking album which I bought straight after watching them the first time, and we went into it next in the form of ‘Entombed In Darkness’, which put in some slamming power chords on and off as things rapidly sped up. The set would progress and start to get filthy with the perfectly timed blasts from drummer James Burke during the fourth track, ‘Purification By Fire’, when he finally (and I was waiting for this) started windmilling whilst ravaging his drum kit. He’s a beast of a drummer and this party trick is one that impresses me to no end.

We went back to the ‘Agents Of Satan’ EP for the 7th track in ‘Skinwalker’ for some more driving force and some excellent riffage. Vocalist Dean Lettice asked for our horns to be presented and it would have been hard to refuse as everyone who was in the venue (still not many by this time) were very into what The Infernal Sea were doing. The next track was another belter from the second album in ‘Plague Herald’, which is a low tempo stomp of pure horror-soaked medieval drudgery including a fantastic break, elegant in its simplicity. Simple but extremely effective and very powerful. There were a few songs left and ‘Into The Unknown’ added something a bit more different with the clacky clean guitars opening the track and the more melodic focus changing the dynamic somewhat. A great set it was and just what I had expected from the band. I’ll definitely be keeping tabs on them.

It was the time where the headliners were to take the stage and bring the night to a close. Abigail Williams [3.0/5] were having to follow a solid act and it would require quite a memorable performance to take the shine off of The Infernal Sea’s set. Sadly, it wasn’t to be in my eyes; they were never a band that I had went out my way to pursue but I was still there with an open mind and looking forward to seeing what many others see in the band. They opened with ‘Godhead’, which put in a nice riff and some high quality rasps from the main man himself Ken Sorceron. There were plenty of triggered blasts coming from the drummer who was putting in quite a shift from the beginning.

Next we were told that this was a new track so there looks to be more in the pipeline from Abigail Williams. It was a bit of a mix of a song with split duties between Ken Sorceron and his counterpart guitarist, with Ken handling the more varied passages whilst the other guitarist was putting in the slamming chords. For the fourth track, we went to their last released piece in ‘The Final Failure’, which started with a deep toned string section provided by the well programmed laptop which rested next to the drum kit. There were some clean chords which led to some overdriven fits of rapid strumming and even more rapid drumming. The blasts were rattling the walls and there were some of the audience members down the front headbanging away and having a fine time. Shame there weren’t many in to also join in on the fun.

There wasn’t much that was really capturing my attention though, but some tracks were better than others; some were more compact and others were rather long and drawn out such as ‘The Final Failure’. A lot of it was rather simple but repetitive and lacking that punch that is required to get away with doing the simple stuff. Other bits were more complex but not captivating and a little dull. Just not my cup of tea really, and the clean slate that I went into this gig with was picking up some splotches of disappointment. The band do well for themselves, but it wasn’t that impressive and stirred no passion in me. Others there enjoyed it so it might just come down to taste, but when the band walked off, I was left a little nonplussed and thinking more about the support rather than the main event.

Always worth a gamble though, going to gigs like these, as you never know what you might come out with. In this case, I came out with some research to do and actually enjoyed some of the band’s discography that I hadn’t experienced before as there was a lot more to this band than what I seen on stage this night. They have skills and a good following but I do think their live performance can do with a bit of finer tuning and maybe a more dynamic selection of songs to make up their setlist. Maybe it was just this night but there you go, first impressions weren’t really exemplary. I would definitely give them another shot though but not if they are headlining. Well…depends on the support then again, doesn’t it?