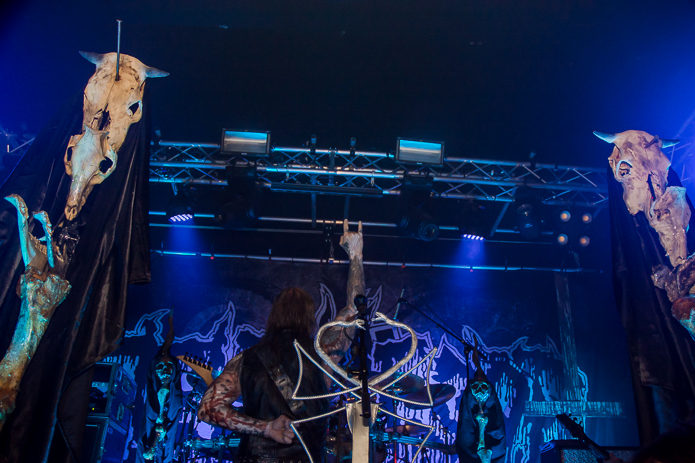 Once again the Dome is playing host to a black metal show and, once again it is Belphegor taking the reigns as headlining act after doing so just over 6 months ago.
The atmosphere is running high tonight as Melechesh make a rare appearance tonight, while also bringing along Bleeding Gods and Commander along on their ambitious European tour.
The queue for tonight is rightfully long, as this is the sole UK stop for Belphegor during this tour.   Once inside the crowd are already lining the barrier in waiting for the bands to come.

Starting off the night’s ferocity were German death dealers Commander with their no thrills approach to death metal allowing the unrelenting heaviness to “shine” through.

The sound could be argued as being a little less than perfect, and that the songs themselves were being played safe, staying firmly within the tropes of the death metal genre.
Despite this no one would argue that they weren’t an engaging band to watch with the two axe-men, Nick Kolar & Steffen Augstein, dueling off and pouncing about the stage in energetic fever.

I found that they really came alive right at the end of their set with their final track, as here they let loose with a ferocious approach and really delivered a powerful, groove-laden track which had even me head-banging by the end.  They had certainly earned themselves much more interest by the end and I look forward to seeing them again with new material.

A small army of roadies now took to the stage, stripped down and up built up the instruments whilst we all took to the bar to build up our own preparations for the forthcoming assault.

Next out tonight were the 6-piece black & thrash tinged  Dutch death metal band Bleeding Gods, here on the back of their 2018 release “Dodekathlon”.
Bleeding Gods add a great deal of theatrical splendour to proceedings as they take to the take in corpse painted and gothic outfits aplenty.

They began with drummer Daan Klemann raising a skull to the audience in an offering, a strange start indeed but it does fit rather well to their overall style.

Vocalist Mark Huisman is who really brings the black metal to this band, with his powerful wails and manic performance that help pin down their capable style.   When he’s not screaming his disgruntled tones, he was head-banging the night away furiously whilst clutching his human skull mic stand.

In the past, I’ve found that 6-piece black metal acts that bring along a live synth keyboardist end up sounding overly melodic and missing out on delivering crushing deathened blows, not that this was the case at all for David Gutierrez.  With a dual keyboard setup, he wielded those synths as though they were axes through pure energy and showmanship, with the sound itself never leaning far from their rich death metal tunes.

They produce on stage a strongly melodic but nonetheless death metal sound here, really pushing ahead with fast paced tracks full of blazing riffs and even a few sly solos thrown into the varied mix.

It was surprising how adept this band was at working up the audience, getting many to head-bang and cheer along to each track.  By the end the crowd were all fully warmed up and ready for the final two bands of the nights.
A very strong set overall from these multi-talented Dutch musicians who left to great applause as they took their bows and left for the stage to once again be cleared and prepped.

Hailing originally from the holy city of Jerusalem, the self-styled Mesopotamian black metal band Melechesh are no strangers to controversy or having to prove themselves throughout their two decade-spanning careers. As the lights dim the crowd roar in anticipation as Melechesh took to the stage in playful and welcoming style, smiling out and basking in the sea of raised horns.

They are formidably strong as they burst into opening track “Ghouls Of Nineveh” with it’s intoxicating mixture of rough riffs with middle eastern melodies. The crowd are already moshing along to Ashmedi’s & Moloch’s tight guitar work and blasting drum work from Lord Curse before this first song is over.

Founding member & frontman Ashmedi held nothing back as he gave an exceptional amount of physical energy into his performance, not letting that ferocity drop for a singular moment throughout the entire set.
He also made plenty of time between songs to address and connect to the ferocious crowd, joking and jostling with pure joy. His vocals tonight are on a perfect ear splitting form as well, belting out a grit smothered sounding blackened snarl while shredding out each riff as the seasoned frontman his certainly is.

Toward the latter end of their set, after the astoundingly solid “Multiple Truths”  Ashmedi laughingly shouts “you fucking crazy maniacs, I love you” of which the crowd all roar back in sweaty glory. Moloch on lead guitar spent the set shredding out each note perfectly, creating a violent whirlwind of energy that the crowd quite fittingly moshed to throughout the night.

Ending on “Rebirth Of The Nemesis” with it’s great swooping chords, soaring chorus and blast beats the crowd are utterly demolished, as are the band as they laugh out in glee at how well received they had been that night.

Melechesh totally stole the show for me, with many in the crowd agreeing that they put on a headline-worthy show.  I truly hope to see Melechesh again soon.

Thankfully the gap between bands is a long one, allowing us all to cool off outside in the smoking area. As we return the stage has been adorned with an array of inverted crosses, pillars of animal bones and Helmuth’s signature twin serpent & inverted cross microphone stand.
Although the stage set-up is impressive, complete with smoke jets, it did make the stage itself feel a little overcrowded and even blocked the view for some of us at the front of the stage.

The atmosphere inside the Dome was tense as anticipation ran high for the returning black metal behemoths Belphegor, after their last blistering performance right here in the same venue back in October 2017.

Starting off facing dramatically away from the crowd, Belphegor wasted no time with introductions as they blasted their way into a blazingly fast opening track to which the crowd go mental for, immediately opening a pit all while vocalist Helmuth spews forth his blackened screams.

Being true pioneers of raw black metal, Belphegor are of course totally precise and on-point throughout the set, with the two live guitarists Impaler & Molokh showing off by standing in the smoke jets whilst hammering out a steady stream of blackened riffs as they both stare out in grim satisfaction.

Helmuth welcomes the crowd after the 3rd track, thanking the support acts and the fans themselves, all while sticking to his screeching snarl, which I have to admit did make me chuckle a little.

The set spans most of their discography but heavily centred on 2017’s Totenritual with tracks like “The Devil’s Son” and title track “Totenritual”, the latter of which the crowd went totally wild for.
Although the set was insanely powerful, with the whole band looking as ferocious as the tracks they were spewing out at break-neck speeds. I did feel that the energy was missing from the band, just a little mind, but compared to the unrelenting and fully committed show by the previous band Melechesh, it did feel a little more formal and less personal.

Sound-wise, however, they were certainly the superior band of the night, as every note sounded spot on, with the bass notes literally rumbling through our chests at many points.

Before a short encore, the air-raid siren of “Gasmask Terror” bleats out before the bloody roar starts yet another ferocious moshpit as everyone head-bangs along to this blast beat laden barrage.
Coming back on stage for final track “Baphomet”, Belphegor have solidified themselves once again of not only being a powerhouse of a black metal band but also as great live performers as well.

Whenever they turn up in London again I’ll very much be at the front of the queue once again, what a night!