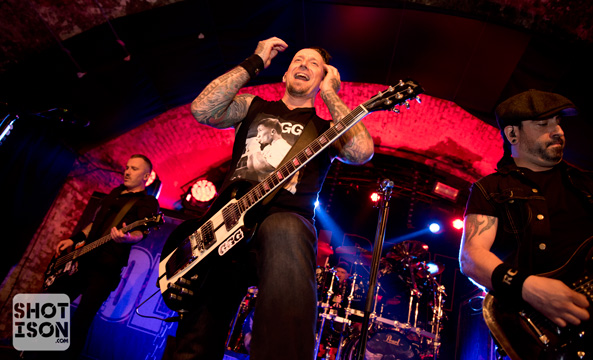 30 May 2018
Review and Photography by Ryan Whitwell / Shotison The mood seemed to be a good one at House of Vans. The skatepark/music venue/gallery was hosting Volbeat’s only London date on their current run of shows, and to make matters interesting, tickets were free!

There was quite a wait, thanks to my press pass I got a queue jump so was at the photo pit nice and early before the main tunnel filled to the brim with eager Volbeat fans. During the wait, a DJ with excellent taste played a few bangers that got much of the crowd singing along, tracks like: War pigs, Raining Blood, and For Whom The Bell Tolls. So it was already clear that people were up for this one!

Volbeat walked out and immediately went into Devil’s Bleeding Crown, followed by a blast through Heaven Nor Hell, A Warrior’s Call and their cover of Dusty Springfield’s I Only Want to Be with You. A strong opener to what would be a near 2 hour show, but it was not nearly as heavy as things got later in the set.

I’ve been to this venue only once before tonight, and the sound then was great. Tonight was no different, with a great sounding band blasting their songs with excellent clarity from the very front (where I started) to the back of the tunnel (where I had to rejoin after the 3 song limit was up).

Plenty of die hard fans from all over the place were in attendance. At the front, right behind where I was shooting, I spied some Volbeat Germany patches. Later in the set, frontman Michael Poulsen asked if anyone had come from Volbeat’s native Denmark, which got a pretty strong response.

The set was littered with homages and tributes. Bits of Johnny Cash, Motörhead, Slayer and Elvis were included, and each homage got a great response, but not quite the same response as Volbeat’s own tracks.

The biggest hits, of course, got the greatest participation with many numbers featuring some easy sing-along sections in the form of “woooaaahs” that were hard not to join in with. There was also an appearance from Napalm Death’s Mark Greenway for their performance of Evelyn.

They are an incredibly tight and professional band. Every note of each song was perfect with no mistakes or technical issues as far as I could tell. At times I thought the vocals sounded like they may have been pre-recorded, they were that clean and note for note perfect. Very impressive!

After the gig I was chatting to a friend online about and he informed me that when Volbeat started playing there were still around 200 free ticket holders outside! The venue apparently expected half of the ticket holders to not turn up, but they were obviously quite wrong about that. Around 850 people were inside, all crammed into one tunnel, which sounds uncomfortable, but there was still room for some very active pits and the atmosphere was brilliant.

The pit was very active at times. Some of Volbeat’s tracks really ramp up the heaviness and the response from the crowd matched when it had to! From what people were saying it sounded pretty intense, but being at the back (and not wanting to damage my camera) I couldn’t really tell first hand.

Whilst standing towards the rear of the tunnel, I saw a lot of people that seemed to be more sweat than human emerging from the sweltering crowd and clambering towards the bar or toilet, whichever need was greater. But they were all smiles and there was plenty of staff working at the venue to get them rehydrated and back into the fray.

Of course, after a set like that there has to be an encore. The barmaid mentioned that gigs usually end around 10.30pm and the bar shuts at 11pm. Not for Volbeat! 10.30pm was when their encore started, rounding off the 2 hour set with Black Rose, Pool of Booze, and Still Counting.

In the end, and looking back, it really felt like this was a gig for the fans. The late announcement along with a word of mouth/basic social media marketing style seemed to lead to the venue being wall to wall Volbeat fans, and the gig was all the better for it.