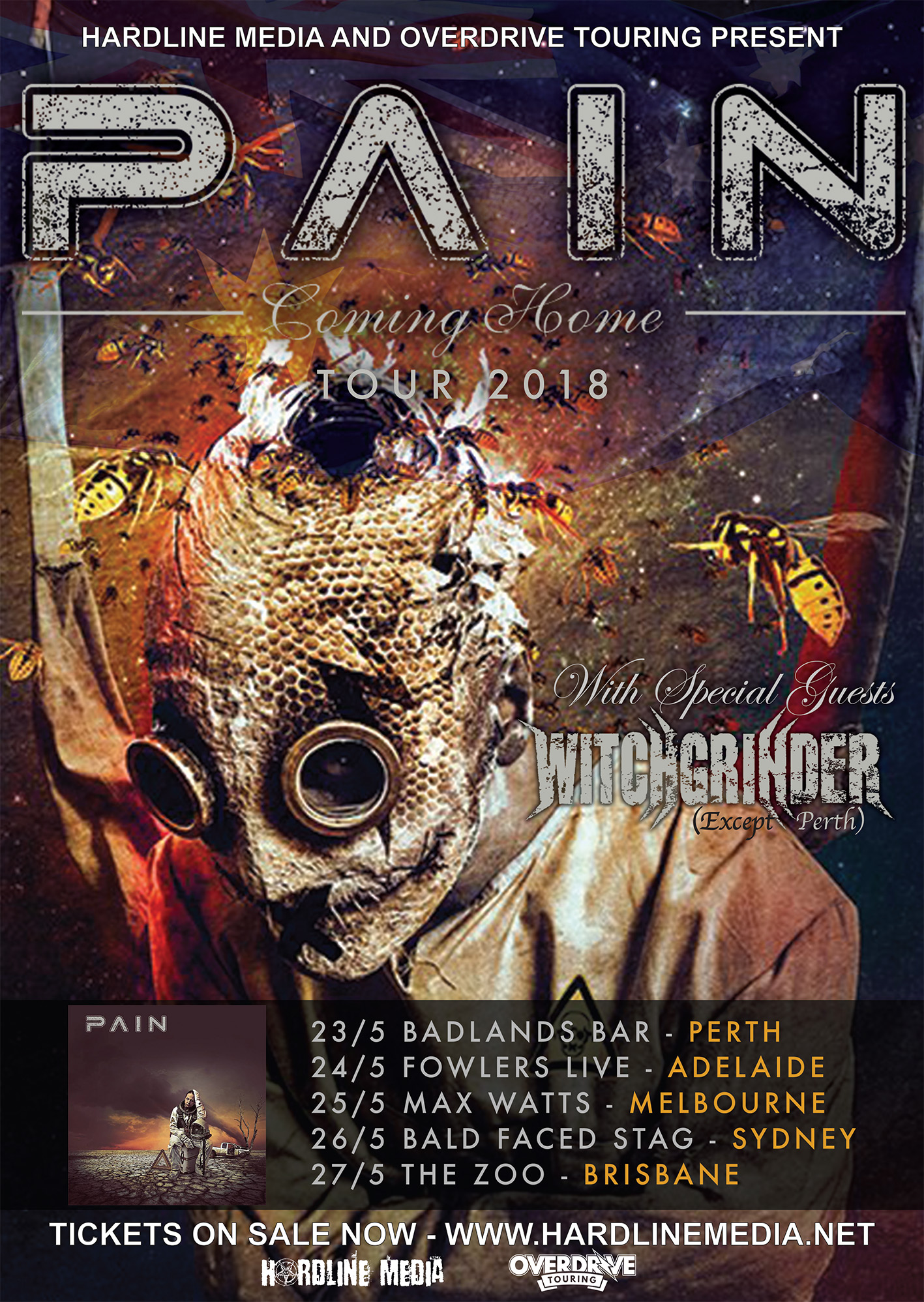 I was ecstatic and somewhat dumbfounded when one of my favourite live bands, Pain, announced an Australia tour. It’s been about two years since the release of the last album, Coming Home and I thought maybe Peter Tägtgren had missed the boat, but Pain has been playing regularly since the album’s release. Plus, I’m pretty sure Tägtgren was itching to come and play in Australia since his promotional tour visit with Till Lindemann for the Lindemann release.

Between the tour announcement and tour, the tour promoter folded over allegations of dodgy financial activities. Thanks to Hardline Media and Overdrive Touring, the tour was saved. In thanks to these two companies, I continued to add my two cents worth on social media whenever the tour was mentioned to ensure its fruition. The Bald Faced Stag in the inner Sydney suburb of Leichhardt had a facelift in 2017. A pub that has a history of promoting live local music, the slight changes to the venue has allowed the pub to host smaller international acts, including Dillinger Escape Plan’s final Australian tour Sydney show.

Apologies to Our Last Enemy featuring guitarist Bryce ‘Bizz’ Bernius, once a member of Genitorturers. Forgetting our tickets and living about 100 km from the venue and having a false start meant we missed their set of Devour the Sun, Wolves of Perigord, Long Time Coming, Spitfire, Fight Scene and 10,000 Headless Horses. Note to self to transcend the final steps of an e-existence and to opt for tickets to be sent to my smartphone.

Melbourne metal band Witchgrinder (support in four of the five Australian shows) filled the little space of an already small stage that was left to them. No strangers to Sydney, most of the crowd were in the room watching them. Even though singer, Rick Grimm, tried to gee-up the crowd with the Melbourne-Sydney rivalry about the lack of noise/appreciation, the crowd mostly didn’t react. The eight-year-old band ripped with a mix of metal genres influencing their music. With nine studio albums and eight years since I last saw them live in Finland during their Cynic Paradise tour, I can’t actually remember how, when or where I first became hooked on Pain. After listening to Billy Idol’s Rebel Yell and intro music a young looking band but full of performance maturity take their place.

This line-up of Pain was completely different to the line-up I had previously seen (obviously other than Peter Tägtgren) and included Greger Andersson on guitar looking somewhat like Loki from Vikings, Jonathan Olsson on bass and Tägtgren’s son, Sebastian on drums. While I had photo privileges, Pain start with “Dancing with the Dead”, “Monkey Business” and “Black Knight Satellite”. While it may seem odd to use the word “delightful” in any sentence describing metal music of any subgenre, one of the strongest praises I have of Pain is in relation to Tägtgren’s performances. The expression, emotion and animation he displays is delightful and Peter did not disappoint me this time by posing for what I describe as a “money shot” opportunity dressed in his regular straightjacket-like attire. It was pitch-black and I didn’t know if my camera picked up on his face but I just kept clicking and praying to Ormagöden that I captured it. Next up was “Suicide Machine”. Before starting “Dirty Woman”, Tägtgren explained it “took us a lifetime to get here and we need to check out the Australian ladies. Are there any ladies here? Are you dirty? this is for you…” And then what is probably my favourite Pain song “The Great Pretender” started—one of Pain’s gothic-skewed numbers. I danced my arse off to this one, not headbanged, because a song this good deserves to be watched as well as listened to. “Just Hate Me” followed. As mentioned the Bald Faced Stage band room is a small venue but I think the audience managed a decent posh pit during “Zombie Slam”.
Peter praised us for being such a happy country and loved our casual swearing during our day-to-day conversations. Don’t know what the ol’ bastard’s talking about!

After having another good dance to “Same Old Song”, Peter introduced to the band.

One of the standout tracks from the Coming Home album “Call Me” had a great response from the audience and was followed by “End of the Line” and “Nailed to the Ground”. The acoustic guitar was out for Andersson, with his bum on a seat while Tägtgren teased him and conversation was had about ‘getting old’. They slowed it down for the next song “Coming Home”.

Pain then returned us to full speed ahead for the last song of the set with an, at times, humorous performance of “On and On”.

Pain returned to the stage for the encore with “You Only Live Twice”, and a headbanging version of The Beatles’s “Eleanor Rigby”. There’s something slightly unnatural about a whole venue headbanging to The Beatles song, but it was fun and it was our sing along song for the night.

The final song for the night “Shut Your Mouth” attracted a major amount of crowd singing and ended with a bit of a drum solo. I have to confess, I didn’t know about the father-son relationship during the show, but my boyfriend and I had similar thoughts about the almost baby-faced drummer—his drumming technique seemed ‘small’ in the sense that there were no exaggerated arm movements or flashing displays (this could have been as a result of the small stage), however the power behind each beat was powerful and precise. We were both surprised and impressed.

While described as an industrial metal band, Pain transcends genres. Some of the music leans closer to the gothic side, while some is more metal. The mix of music from Pain’s back catalogue was also reflected in the audience assembled with upraised, eager faces. Sydney’s devoted metalheads were present mixed a lot of men with short hair/baseball hat combinations, not typical of the scene. I always thought that Pain would also have a strong gothic following (especially with songs like Dancing with the Dead, Same Old Song and The Great Pretender), however other than one notable gothic from years of old, The Black Douglas, I noticed no others.

Also notably absent from the set list was the song “Follow Me”. While I was disappointed I didn’t get to hear the Peter-only vocals of this song live, it wasn’t a deal breaker for me and I can always listen to that version on the Cynic Paradise CD2 or the live version on the You Only Live Twice Bonus CD.

The show was over all too soon and while the outro song “I Did It My Way” played, Pain slapped and shook hands with the crowd, threw out guitar picks, bowed and posed for the now traditional photo of the band with the audience in the background before leaving the stage.
Oh, and final apology to the merchandise people for not coming good with a request to be serenaded to with “He is the Pain seller…this is the Pain seller. Pain..Pain..seller..selleeeer!!” I hope someone fulfilled your dream. Encore:
You Only Live Twice
Eleanor Rigby
Shut Your Mouth