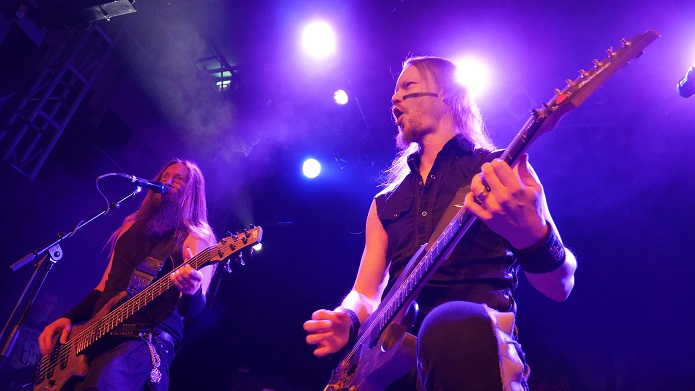 Besieging once again the grounds of the O2 Islington Academy, it has become a near familiar reoccurrence for tonight’s beloved headliners, the Finnish folk masterwork that is Ensiferum. Being on a major European tour, following the success of 2017’s Two Paths – an unapologetic love letter to classic heavy metal trappings whilst still retaining that frantically heavy folk metal style that they’ve been fleshing out since 2001’s debut self-titled album Ensiferum. Tonight’s line up is one rich with fantasy, lore and legends of history. With Roman Empire enthusiasts Ex Deo, led by Kataklysm’s front-man Maurizio Iacono, alongside Wind Rose & their own obsession of Tolkien inspired tales of Dwarven folklore. It is no surprise then, that as we climb the stairs into the music hall of the O2 Academy that we are met by a wonderful mix of costumed concertgoers’ eager to indulge in tonight epic offerings. With centurions, Vikings, goddesses & plentiful war-painted warriors abound tonight. Starting tonight’s besiege, are Italy’s Wind Rose as storm the stage to great effect, decorated in the finest Dwarven armour outside of any digital realms with enlarged shoulder pads, brushed iron effect breastplates & engraved gauntlets. And hidden behind all of that are the beaming smiles of the band themselves, with vocalist Francesco Cavalieri leading charismatically across the stage. It is a very sad fact to have learnt that only a week before tonight’s appearance, whilst on tour in Barcelona, that Wind Rose’s tour bus was broken in to by thieves, stealing whatever they could.
Thankfully no one was harmed and that the band have been able to continue playing throughout the tour with the graceful support of Ensiferum and of their own fans through crowdfunding & a plea to purchase merchandise, which has certainly been working as their stall is near empty by the end of tonight’s performance. The opening track of “Dance of Fire”, sets a fast-paced groove full of jovial enthusiasm and powerful choruses and a galloping wallop that whip up the crowd near instantly with their infectious charm and surprisingly accomplished sound. Leading the mead-hall atmosphere with great glee, Francesco Leads theatrically with catchy chanting, head-band-along rhythms and excitable optimism. With songs like “Drunken Dwarves”, “The Wolves Call” & “The Breed Of Durin”  it is no surprise to anyone that these Italian beats would go down so well within tonight’s lineup. A sentiment I heard throughout the crowd, and one echoed back myself, was that the only thing to have improved the experience of seeing Wind Rose would have been if we had all studied their music to better indulge in shouting the powerfully charming lyrics back at them.

During this fully enjoyable performance, Francesco kneels at stage center as the lights dim to a scattering of lighting-like strobes & echoes of crackling fire can be heard emanating from the stage as he solemnly cries out  “This next song is one that will allow you all to take a ride with us to the home of all the dwarves, to Erebor ” as the chant along to the anthemic “To Erebor”. The bulk of tonight’s crowd boom with excitement and are seen moshing, headbanging and dancing to each track with a determination that would warm any bands hearts, but especially so for an opening act such as Wind Rose are.
As final track “The Breed Of Durin” comes to it’s close, Wind Rose being to take their leave, setting a very high bar of anticipation for the bands ahead.

After a short break, to allow the pit-goers a respite, the stage lights turn a vicious crimson reminiscent of drapes, the sort of which was favoured by the then all-conquering Roman Empire.

This colourfully visual statement is what beacons Canada’s prominent musicians concerned with The Roman Empire, Ex Deo as they walk out with serious intent into the stage. Although in a rather different aesthetic sense, Ex Deo too continues the theatrical nature of tonight’s performance, with vocalist Maurizio Iacono being donned in the golden breastplate & matching amour reminiscent of any Roman general or leader. With as little as a chanting statement, Maurizio dives into opening track “The Rise Of Hannibal” as he impressively lets his vocal prowess take over in relentless fashion. Maurizio commands tonight’s crowd with a proud manner for their set, being able to bring their exhaustive tales regarding the victories, conquests and legends of the Roman Empire to Europe itself during this tour. His vocals are a much more serious and white-knuckled death metal affair than Wind Rose’s. The crowd, however, are still fully involved with these Canadian noise artists as they hurl themselves about the pit and chant along to each track.

With Stéphane Barbe & Jean-François Dagenais on dual guitars and Dano Apekian on Bass tonight, the sound is kept suitably heavy, with a strong set of hardened riffs together with the occasional flair of a melody. For “Pollice Verso (Damnatio Ad Bestia)” from their 2012 album Caligvla, lead guitarist Stéphane Barbe is able to indulge a little more here, with the inclusion of a short solo piece that the crowd raise their horns for, allowing the pit to settle for the time.

There is a particular dependence on backing tracks for many sections of their songs, adding the imposing, antiquated orchestral which I personally feel detracts somewhat from their overall presence somewhat. Although when taking full reign of the sound through instrumentation, churning through each riff-laden track, they are in no way pulling their punches.

This act could conceivably be one that sets apart the crowd, being a much more ‘straight’ death metal fayre than the decidedly folk thematic of Ensiferum & Wind Rose. Instead of creating any sense of opposition, however, the crowd are all brought together by Ex Deo’s relentless energy and charisma as they pump their fists high in celebration of tonight’s vanquishing conquest! During the slightly longer break in preparation for tonight’s headliners, instruments are set & unveiled, and the crowd amuse themselves with singing along to the likes of ACDC, Metallica, Iron Maiden and the like as they play out from the speakers. The interim music finally tones down in favour a warmly lit stage and a great clamour as Finnish legends of folk metal ENSIFERUM take their places for the next month or so minutes. They dive right into opening track “For Those About To Fight For Metal” from 2017’s Two Paths album, with it’s not so subtly reminiscent opening to that of ACDC’S “Thunderstruck”. It’s a fast-paced and very apt opening track, giving away no qualms about where their inspiration or indeed hearts, lay, as this track by its own merits a five-minute celebration of the classics of heavy metal as well being a great Ensiferum song too. The audience is immediately enthralled as an energetic pit opens no more than two minutes into the set and crowd surfers soon follow here tonight.

Lead vocalist Petri Lindroos name is on great form tonight with his great booming vocals and compulsively energized presence. Together with Sami Hinkka on bass-guitar, he is a fine sight tonight too, as his backing vocals and overall charming quality help solidify themselves as the metal champions they certainly are. “London tonight you will be our legion horde so make some noise” Petri screams out as the crowd collectively shake the midst foundations with their roars. With iconic track “In My Sword I Trust” from 2012’s Unsung Heroes, the moshpit nearly trebles in size as the crowd wildly trash about and collectively shout along to the catchy riffs and chorus. Tonight’s performance naturally leans toward 2017’s Two Paths album with songs like “King Of Storms”, “Way Of The Warrior” & the self titled “Two Paths” which make for surprisingly solid additions to the iconic greats such as “Lai Lai Hei” with it’s it’s ridiculously enjoyable chorus to shout out along to.

With the ole founding member of the original line-up, Markus Toivonen does great work providing lead guitar responsibilities & backing vocals to powerful effect,  shining none more so than in the guitar-centric track “Twilight Tavern” with its progressive solo elements which sound great tonight inside the venue. Whilst the crowd go wild for the climactic finale to this song with a roaring mosh pit in full whirling energy. Ending their main set to the shredding vocals of Petri Lindroos on 2004’s “Into Battle” from the seminal album Iron, the band show no sign of slowing down as this powerfully epic track comes to a close.

It’s not long before the members run back out into the light as the thunderous opening riff (which is howled back unreservedly by the sweat-drenched crowd) of title track “Iron” with the entire band throwing their full energy into this last song,  the entire crowd is a mess of headbanging and moshing as this song roars out their definite triumph of a performance.

As I reflect on tonight’s set, I find myself thinking of song such as “One More Magic Potion”, “From Afar”, “Ahti”, & the until recently, a firm staple in their live shows of “Two Of Spades”. This isn’t so much a complaint as it is more a reason to make sure I can them again when they’re not touring in tow of a new album release. And with the ten year anniversary of 2009’s From Afar, that may soon be a possibility.

But also, as we leave tonight, dripping with sweat and in many cases beer as-well, there is certainly no doubt that Ensiferum delivered on all fronts with their near immaculate performance and sheer enthusiasm of playing for a live audience.