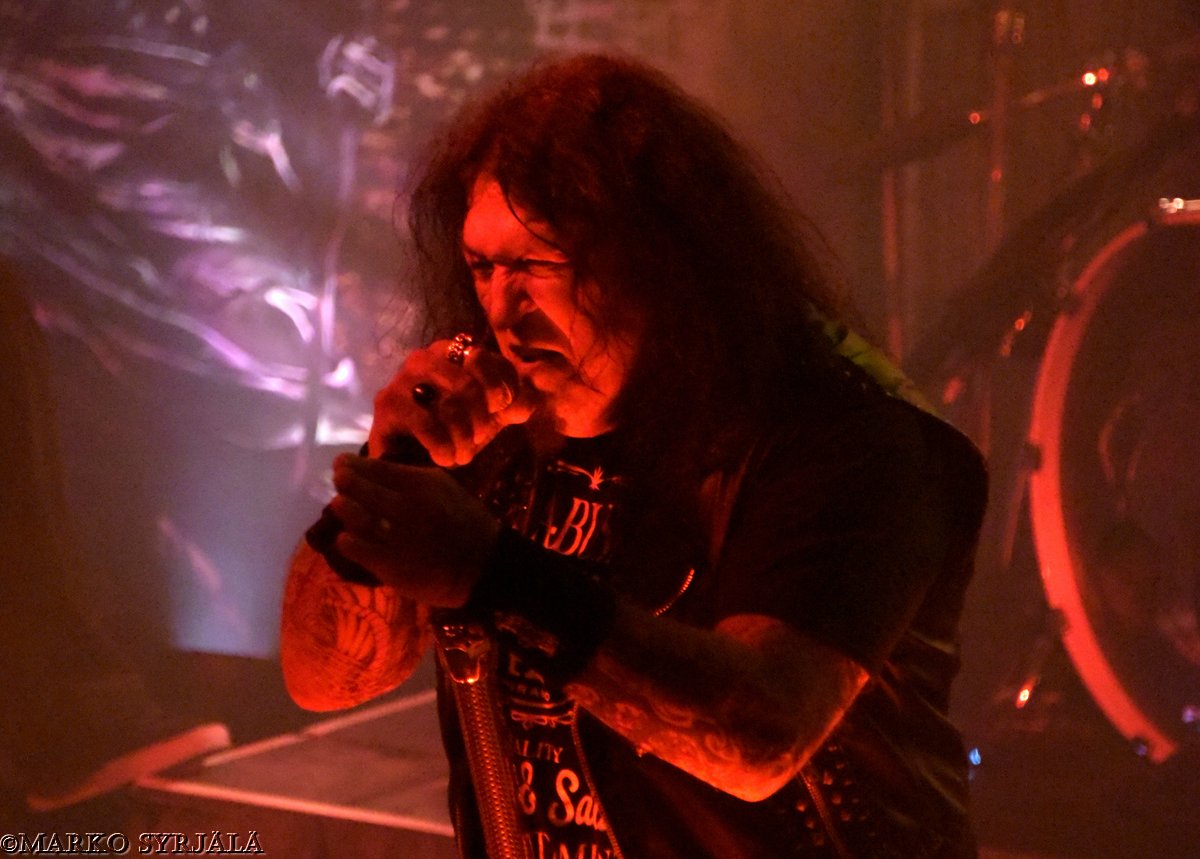 When gigs of both Cradle Of Filth and Trivium did sell out gigs in the 600 capacity club, whereas Testament did a  little bit better by selling over 1200 tickets for the first gig in Finland and almost the same amount for the second gig. So it can be easily said, Testament is doing great in Finland. The Bay Are thrash metal veterans have done several festival dates in Finland in during the past years, but eighteen years have passed by since the previous indoor show. Therefore it was about time to see Testament on the headlining gig of their own. The touring package looked fabulous as the Canadian long-time thrasher Annihilator and the Polish death metal veterans Vader shared the bill.

The Polish death metal patrol Vader started the night off. Obviously being an opening band for the iconic thrash metal names is a bit ungrateful position for anyone. The death metal squad did a stable job on the stage. Even though the playing time was quite limited, but the four-piece did a fine set of the essential tunes from the five different albums. The debut classic album ULTIMATE INCANTATION celebrates the 26th anniversary. Therefore, four songs got blasted out. The audience politely cheered for Vader’s outbreaking death metal outburst. The Canadian thrash metal legend Annihilator were on turn next. The band has gone through so many changes that probably Jeff Waters himself doesn’t remember all the twists and turns what has happened within the group during its over 30-year career. It was in the summer of 2015 when Annihilator last time performed in Finland. The show was an outdoor show in Jalometalli Festival in Oulu, and at the time, the band had recently split with its long-time band partner Dave Padden, and Waters now returned behind the microphone after a long-time break. To be honest, the show in Oulu wasn’t the best I’ve seen from the band, so this time it was going to interesting to see, how the things have evolved since then. The latest, fifteenth, Annihilator studio album FOR THE DEMENTED saw the light on last fall. With that album, the band kind of went back to its early, more technical and thrash based, roots and it was overall such a promising record after somewhat disappointing SUICIDE SOCIETY (2015). The band kicked off its 45 minutes set with “King of the Kill,” which definitely is a killer opening track. Although there was not much space on the stage and it was half-dark lightning, the whole band performed with high-level energy and the show started out great. When the band next played a couple of newer tracks, the sound went kind of messy, and the band sounded kind of chaotic at times. Water’s playing was still amazing to follow and listen, but his ability as lead vocalist wasn’t on the same level. He managed to handle the never material ok, but when it was time to play the classics, his vocal limitations were easy to recognize. Songs like: “Set the World on Fire,” “Alison Hell” and “Phantasmagoria” were all “screaming” for vocals which would sound more like the way how those were originally sung. On the other hand, the house was packed full of younger people who have probably never heard the original versions, so apparently, these current versions worked them good enough anyway. Good songs are still good songs, and Annihilator catalog is full of fantastic material. The current band consists of young, relatively unknown guys, and they did a decent job behind Waters.  Musically, the band is back on the right course, and the setlist performed now was a good selection of tunes from the different eras of the band’s career. There’s not much more you can do in 45 minutes. The show was overall enjoyable, but a bit average, because of the thing which I need to repeat here. It’s clear that Annihilator is a one-man show nowadays, but I’m hoping that the band would hire or a real vocalist in the future. Waters could then concentrate on his playing, and the shows would reach a whole new level that way.

King of the Kill
One to Kill
No Way Out
Set the World on Fire
Twisted Lobotomy
W.T.Y.D.
Alison Hell
Phantasmagoria As stated above eighteen years have passed by since the last indoor show of Testament. The legendary Bay Area thrash metal kings have instead made a visit to several Finnish metal/rock festivals and managed to achieve the new fanbase. Judging by the number of people at both the shows in Helsinki and Tampere, apparently those festival gigs have definitely been the utter important for Testament to reach for the new and young generation. The floor area was totally packed by younger metal fans. As for the setlist, it was awesome so to say. Fortunately Testament focused on the material of the latest offering BROTHERHOOD OF THE SNAKE. A couple of songs from DARK ROOTS OF EARTH and one off from THE FORMATION OF DAMNATION got blasted out.  Of course the mandatory Testament ever-green tunes such Into The Pit, Electric Crown, First Strike Is Deadly, Souls of Black, The New Order were the obvious choices on the set and Practice What You Preach, Disciples of the Watch concluded the nearly two hour Bay Area thrash assault. The sounds were a bit distorted at the beginning of the set when the opening song The Brotherhood Of The Snake roared out of monitors as Hoglan’s drumming was dominating, fading the guitars under. However the sounds got improved better, but Chuck Billy’s voice could have been a bit louder. Well, the whole acoustic of the venue is definitely awful and doesn’t do the justified feeling and atmosphere for bands and artists to have the decent and balanced sounds. Obviously Testament ain’t the first act having the same kind of challenge with the sounds of the venue. The solos performed by each member had the magnificent role in the set. Alex Skolnick definitely is the essential part of the whole Testament team as his solos and playing definitely fascinated the young guitarist generation. Whereas Petersson’s more on the background even though he did shred a guitar solo of his own. Of course, Steve Digiorgio and Gene Hoglan performed their solos as well. As usual, the floor was burning up when the circle pit was spinning around the area. Occasionally the insane looking pit calmed down till the chief aka Chuck Billy encouraged and made the audience go nuts on the floor. Testament offered a great show of the finest thrash metal with Chuck Billy sharing some stories between songs. Even though the gig wasn’t that mindblowing one, but all the bands were in the great strike thru the whole show. Hopefully, these kinds of packages combining classic bands from separate metal genres will be seen on the Finnish soil in the future.

Brotherhood of the Snake
Rise Up
The Pale King
More Than Meets the Eye
Centuries of Suffering
Guitar Solo
Electric Crown
Into the Pit
Low
Stronghold
Throne of Thorns
Guitar Solo
Eyes of Wrath
Drum Solo
First Strike Is Deadly
Bass Solo
Urotsukidôji
Souls of Black
The New Order
Encore:
Practice What You Preach
Disciples of the Watch