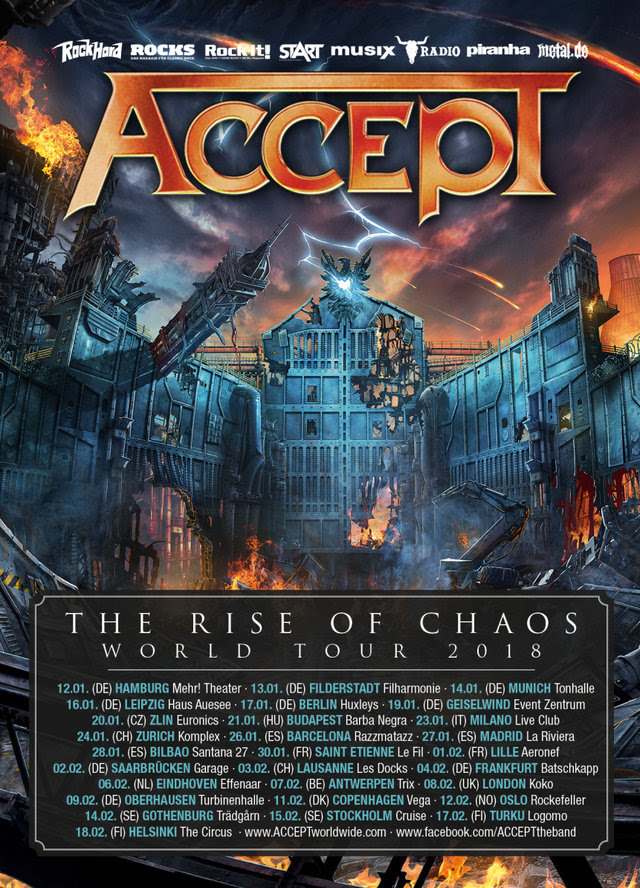 ACCEPT – Live at the Circus, Helsinki

When speaking about certain necessary things that remain unchanged, about still being loyal to your roots and legacy, the mighty Accept deserves mention and credit for sure. As everyone knows, Accept, led by Hoffman and Baltes, returned to the limelight with the former TT Quick front man Mark Tornillo. Since them legendary outfit has released four studio albums filled with great heavy metal and immortal riffs. Despite changes in the line-up, Accept have been able to maintain the success and even gained the new fan base. Accept has a loyal following amongst die-hard old school metal fans in Finland. There is no wonder why over 1000 tickets sold for the first time whereas the second gig on Sunday didn’t sell that lot. However, nearly 500 metal hearts had arrived to testify the rise of chaos at the Circus club in Helsinki on Sunday.

The German metal titans started their 165 minute set of pure old school metal on time.  The set was kicked off with “Die By The Sword” followed by “Stalingrad.” Clearly Accept doesn’t want to be just a nostalgia act as the set is built to cover a major part of the newer material from the Tornillo era such as “The Final Journey,” “Pandemic” and “Teutonic Terror.”  The latest album THE RISE OF CHAOS was present with five tracks. The album is not necessarily the strongest album in the band’s new era, but there are a couple of killer songs. “Die By The Sword”, “Koolaid”, “No Regrets”, and “Chaos Rise” sounded great but “Analog Man” represented something completely different. Actually, the song itself is ok, but its lyrics are quite artificial that those attracted mainly the feelings of the embarrassing in the audience. It was a bit of a Spinal Tap oriented moment of the show.

Of course, the set included a lot old classic songs as well. “London Leather Boys,” “Midnight Mover,” “Fast As A Shark,”, “Metal Heart,” “Breaker” and many others were of course heard. Those older tunes definitely create a fist-pumping reaction. However, the crowd seemed to be aware of the newer material as they were singing the lyrics by heart. That just testifies that Accept fans have approved of them. Mark Tornillo once again proved to be one hell of a great frontman. Even though he didn’t communicate that much between songs, instead he seemed to be aware of his role in the band. When both Hoffman and Baltes hit the frontman, and he withdrew backward. As for the former Grave Digger guitarist Uwe Lulis, he has got a dream-come-true job after being in other bands for decades. Lulis’ role as the new band member turned out to be pretty obvious by helping out Hoffman’s tight playing. The current drummer Christopher Williams is a great showman and highly skilled player. He’s exactly what Accept needs nowadays in order to keep the fast played drumming up. However Peter Baltes and Wolf Hoffman definitely know their status and places on the stage. When “Objection Overruled” got blasted out of loudspeakers both Hoffman and Baltes did one hell of a bass/guitar dual playing. That was a capturing playing performance by the primus motors of the band. The song was also one of the definite highlights of the show. Since the reunion, the band has relied a lot on their new material, but at the same time, the rest of the set has been like carved in stone. There’s not been many changes or surprises in a long time, but to be honest, songs like “Objection Overruled” are more than a welcomed addition to the set. On this tour, Tornillo performed the song for the first time, and it sounded just phenomenal. Perhaps, it would a good idea to add some more “deep cuts” like this in the future? Accept is definitely a well-oiled metal machine, grinding, smashing and crushing on the stage. The setlist was a great mix of old and new stuff but above all, the sound was astonishing good and crystal clear right from the beginning to the end. The Accept gig was truly great and it was definitely enjoyable through the whole set.