Nile are on my list of must see bands for this year as you can’t deny that they have, along with Dying Fetus, Suffocation and Pestilence, pioneered the sub genre of technical death metal. Last year, long standing lead singer Dallas Toler-Wade announced he was leaving the Egyptian death metallers to explore new genres after 15 years with the band. I can’t deny that I wasn’t totally crushed when I heard this as I was yet to see them live so I’m more than a little anxious as I travel up to North London’s, the Dome to finally see one of my favourite death metal bands play on their first tour with their Guitarist, Brian Kingsland, on lead. 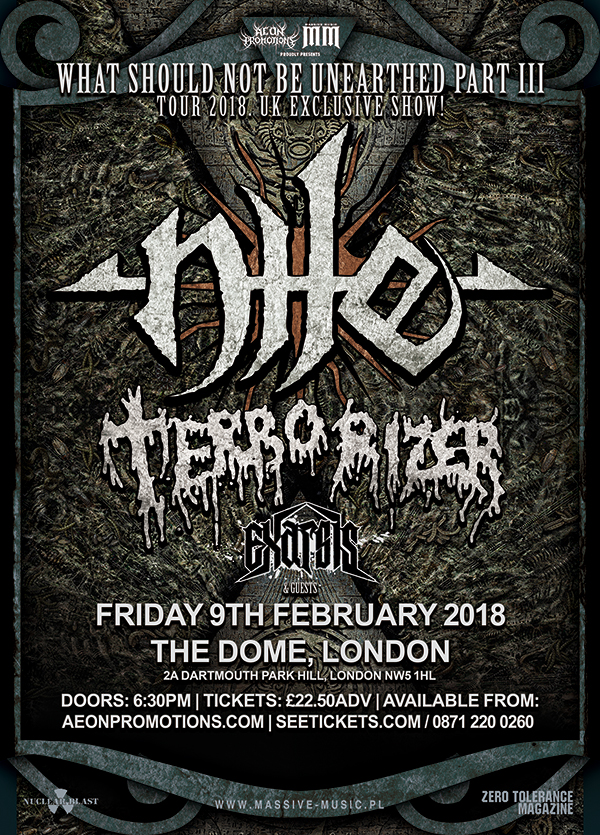 Art Of Deception, of Norway, take to the stage as tonights openers. They have a great deal of enthusiasm for the chance to spread their brand of noise to London for the brave few dozen that have ventured out for the weary 18:45 slot.

A strong yet young sounding performance with a professionalism that almost seems inherent to Norwegian musicians. Musically they are a death metal act, a little lacking in finery but still pack a solid punch. They do what they can to enliven the stoic audience and are a great band to kick off the music for tonight.

After that performance I managed to grab myself a dodgy beer before Greek trashers, Exarsis take to a rather cramped stage. I’m no huge trash fan I’ll admit but I usually find their live shows pretty fun and energetic, bands like Kreator, Sodom and Dust Bolt.

Exarsis are no Kreator unfortunately, and have a rather dated high pitched wail that older power metal bands used to do a lot in the 80’s. Personally, that kinda style has had its time and place and for me it wasn’t at a death metal gig. They weren’t awful, just really, really not my thing.

They do get a few hair metal lovers heads banging during their short set and seem unperturbed by the crowds indifference to their genre of metal so fair play to them to just getting down to some thrashy business.

Personally with a hour long set by grindcore pioneers Terrorizer, I expected a better turn out and one hell of a bat shit crazy mosh pit so I stood there, arms crossed waiting for the crowd to finally engage with the bands on stage. That came 3 songs in as Terrorizer started to pound out song after song like they we’re beating you over the head with a hammer.

Former member “Jesse” Ernesto Pintado (RIP), first coined the phrase grindcore and also played with Napalm Death before reforming Terrorizer in 2004 so I’m a little disappointed that UK grind fans haven’t dug themselves out of their crusty squats to come pay homage to USA’s leading and influential grind band. Okay they aren’t as diverse as the more obvious bands of the genre, eg. Pig Destroyer and Agoraphobic Nosebleed but they ARE brutal and uncompromising and slowly the crowd wake up to the bands tight performance.

What you can’t help but notice is the drummer (above),”Pete” Sandoval, the father of the blast beat, a self taught musician that steals the limelight as he pounds on those pedals faster than almost any other drummer out there. He still has bags of energy in his diminutive slender form and personally makes seeing Terrorizer worthwhile.

Not quite what I was expecting but maybe seeing them headline at The Underworld another time might yeild better results. One comment I gleamed from the crowd around me was that the band seem intentionally muted. For their brand of metal, you expect it to be loud right? I don’t know if its common practice that sound techs turn down the support bands to make the headliners sound so much better but it seemed like it tonight. Shame.

For me, Nile is Karl Sanders and if he was to one day leave the band, Nile should call it a day, end of. Total respect for them trying to work things out now their long standing front man has left the band but they start off the set a little shakily and lacked cohesion during their opener, “Ramses Bringer of War” but having gotten the first song out of the way they seem to warm up and the crowd erupt violently around me. A lot of tech death these days lacks heart and aggression in my opinion and has a lot of guitar “noodling” that leaves me thinking the music is rather soulless. Not so with bands like Nile who attack you from all sides of the stage as Brian, Karl and Bass player, Brad Parris belt out their savage melodies in unison.

The mosh pit is suitably sweaty and painful as one massive juggarnaught with a buzz cut and a leather jacket close lines moshers across the pit, gathering them up in his massive arms. I took more than a few bruises home with me that night and I don’t think I was fully recovered from the Pestilence gig a the week before, to be honest but managed to stay on two feet whist my mates ended up spectacularly on their asses.

Best song of the night for me  was “Kafir” and later on “Uns, Slayer of the Gods” which also sounded immense. The latter song got me into Nile and helped lead me down a death metal rabbit hole that I’m yet to climb out of so it was great to hear this song live with Karl’s vocals bringing out the metal horns from the crowd.

New lead vocalist, Brian Kingland (above) does an awesome job stepping into Dallas’s shoes and more than holds his own centre stage. I had a few mutterings from fans around me that perhaps he doesn’t quite have the charisma or stage presence of a lead singer and certainly Dallas fulfilled that role perfectly for 15 years so I don’t envy the guy at all. For older fans of the band that might have seen them live before perhaps tonight’s performance lacked something though none, when asked, could quite put their finger on what it was.

Karl is an awesome dude though and comes across as one of the nicest guys in metal and manages to pull the band through their set, of which sounded immense. I leave feeling very happy that I finally managed to see one of my favourite metal bands, though some die hard fans seem less so. We all await their new album, later on in the year.