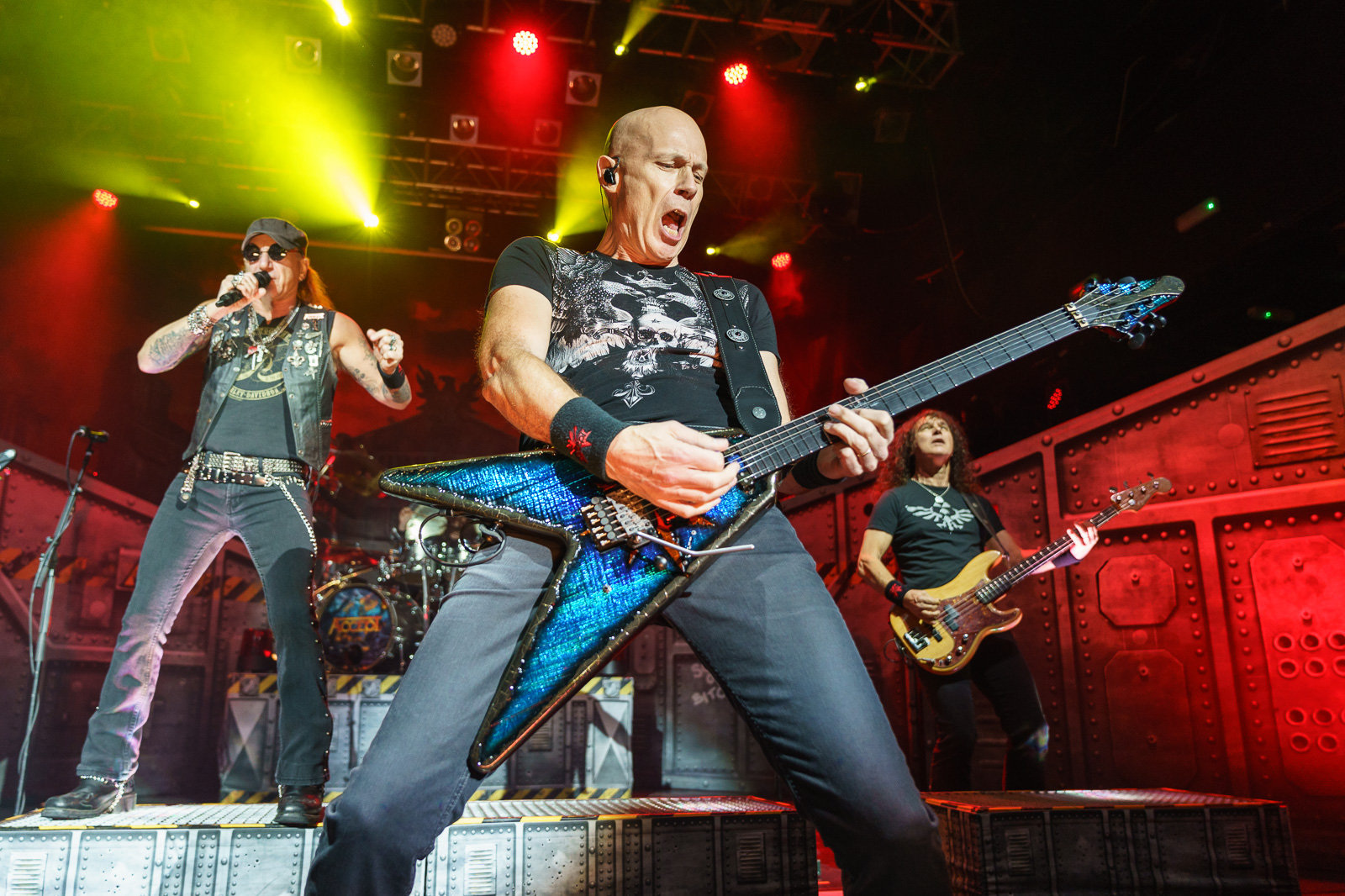 On a windy February evening, I find myself occupying what has to be one of London’s most beautiful indoor venues – the KOKO in Camden. The building might look plain and ordinary from the outside, but the marvelous interior creates a perfect backdrop for the night’s show. Heavy metal heavyweights and teutonic heroes ACCEPT are back to promote their latest album The Rise of Chaos, with American speed metal phenomenon NIGHT DEMON supporting. An eager horde of metalheads gathered outside for the feast.

As the venue opens and the ground floor of the venue quickly fills up, NIGHT DEMON enters with a bang.

The American three-piece released their sophomore album Darkness Remains last year, and has everything to prove for the London crowd.

The are loud, fast, aggressive and borderline punk, all elements that seem to go well with the crowd. Their old school sound and endless supply of energy makes for a great opener set.

It’s hard not to be reminded of Motörhead when beholding the band’s performance. Bassist and vocalist Jarvis Leatherby’s ultra-aggressive and pure rocker-persona shines through his time on stage, and makes for some entertaining eye candy.

The band seems well-received by the London crowd, and proved themselves a worthy opener for the approaching headliner of the night.

As the clock shows 8:45, a stage decorated with what looks like props from a German steel mill signals the time is nigh for ACCEPT.

Sure enough, minutes later the Teutonic heroes of traditional speed and heavy metal enters to a roaring cheer from the crowd. Tearing into “Die By The Sword”, the fresh opening track off The Rise of Chaos, the party has officially started.

Brothers in arms Wolf Hoffmann and Peter Baltes smilingly beholds the crowd from the front of the stage, while vocalist Mark Tornillo parades around in his Ozzy-like sunglasses singing from the bottom of his lungs.

Timeless classics go hand in hand with newer material, and their almost two-hour long set is well paced. “Stalingrad” gets the crowd jumping as vocalist Mark Tornillo waves the band’s banner on stage, all while the crowd is singing along to the lyrics about the German defeat in the battle that turned the Second World War.

Besides the first song, material from their latest studio effort is confined to a four-song segment in the middle of the set, starting with the title track and ending with “Analog Man”.

Some highlights of the night include “Princess of the Dawn”, “Breaker” and the all-too appropriate “London Leatherboys”.

The band’s incorporation of classical music in the shape of melodic guitar licks is a highlight in itself, as seen in songs like “Stalingrad”, “Final Journey” and “Metal Heart”.

Hoffmann effortlessly tears through all his guitar solos with the force of German precision, all while making hilarious faces.

But no Accept concert is complete without the immortal classic “Balls to the Walls”, which unsurprisingly ends the night of heavy metal goodness at the Koko in Camden.

Accept are still going strong after almost 40 years, and after having seen them in action again, it would be hard to say otherwise.