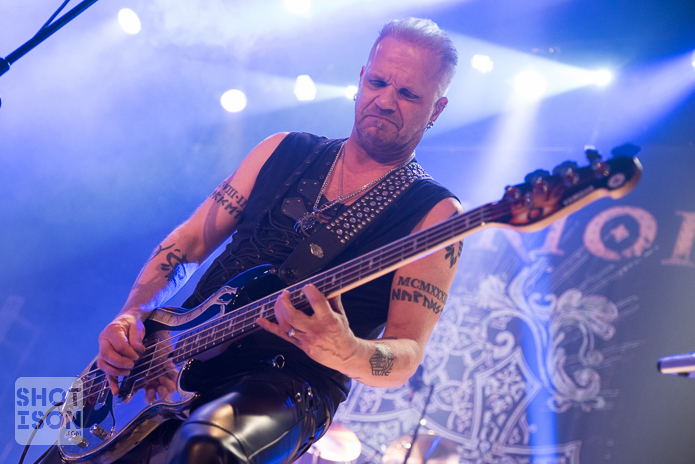 It was a wet and miserable night outside Islington Assembly Hall last Saturday, but inside a crowd was gathering to witness four acts, over five hours, delivering a huge amount of symphonic metal. Metal veterans, Therion, were back in London as part of their massive European tour, with support from Imperial Age, Null Positiv, and Midnight Eternal.

It was an early start for Midnight Eternal, who took to the stage at 6.30. They set the tone for the majority of what was to come, with some very impressive vocals from Raine Hilai as her background in theatre gave a great element of drama to bolster the themes and attitude of the band. I’m a sucker for a good guitar solo, so lucky for me that the set was filled with some great guitar work from Richard Fischer. The tone of the set took a turn to the doom side with their song ‘Masquerade of Lies’, which gave bassist Greg Manning a chance to shine. The song also stood out for me as Hilai really got a chance to show off her range of vocals, and it I was very impressed! Overall a great start to the evening. As the next band, Null Positiv, took to the stage the vibe was clearly a very different one to the theatrical and well lit set beforehand. I am not going to shy away from the fact that the lighting was awful for me as a photographer, as the silhouetted human shapes produced their unearthly dark and blackened take on the symphonic metal genre. The rare occasions the band could be seen, their trademark black face paint with thick lines across the eyes could be seen, further emphasising the tone of the band. I hadn’t actually heard of these German metallers before this gig, but I absolutely loved their set. Brutal, growling vocals from Elli Berlin were contrasted with some lighter singing, especially in numbers like the title track from their 2017 album ‘Koma’. The variance in vocal styles making me wonder if they were coming from the same person. Null Positiv rampaged through their set, with barely a moment between numbers. But it wasn’t all hard hitting metal, there were some moments of respite for a couple of song intros, but not for long before the death laden riffs from Flo Schnablo (Drums), Martin Kotte (Guitar) and Tom (Bass) ripped through Islington Assembly Hall. Next up, things took a turn towards the civilised, as Russian band Imperial Age stood proudly upon the stage. As the name suggests, this band focus on themes surrounding civilisation and conquest, like a well-read version of battle metal. The band’s look carried the theme further, with elegant robes and leather battle outfits. Imperial Age have a strong link with headliners Therion, as some members of Therion feature on Imperial Age’s latest album, The Legacy of Atlantis, released last year. They are also signed to Therion founder, Christofer Johnsson’s, record label. The epic sounds from the recorded works were great to hear. Although much of the ensemble that you hear on the albums were not on stage (I don’t think it would be big enough to fit them all on there) the backing tracks did more than enough to fill the room with some epic and powerful symphonies. Singer Alexander “Aor” Osipov’s deeper vocals worked very well with Jane Odintsova and Anna Kiara’s lighter tones, as the three swapped and changed roles often and to great effect. Things did move further into full battle metal territory with numbers like ‘Anthem of Valour’, and those numbers sounded impressive. I think that the faster riffs of Anthem of Valour made it a great choice for the set as it took a step to the side of the imperialistic feeling and gave the packed room something to really bang their heads to. The instrumental section of the song gave Belf (bass) and Vredes (guitar) a chance to take centre stage, hair flying wildly as Max Talion (drums) gave his bass drum pedals a thorough work out. By the end of the third act, my camera and I were beginning to show signs of fatigue, but we were ready for the legendary Therion. Since the late 80’s Therion have been bringing their brand of orchestral, operatic metal to the world and continue to do so today with their latest record. The 3 hour operatic epic of “Beloved Antichrist” is released on the 9th of February, and this set would contain a couple of numbers from that, but also a good mix of songs from throughout Therions lengthy existence.

As Therion take to the stage, the crowd erupts with a huge cheer and it’s straight to work for the band, opening with the title track of their new album ‘Theme of Antichrist’. It’s a powerful number and really made a statement of intent aimed at those in attendance. Therion have had their fair share of lineup changes over the years, but tonight’s line-up of Christofer Johnsson, Thomas Vikström, Sami Karppinen, Nalle Påhlsson, Christian Vidal, Linnea Vikstrom and Chiara Malvestiti sounded fantastic.

The vocals are, of course, a very important part of Therion’s sound and I was not disappointed by the line-up tonight. 110% given by all three vocalists, with some great emotion being portrayed. Vikstrom especially, throwing herself to the floor for some extra drama during some of her performances. Those kinds of theatrics added an extra layer of depth and highlighted how great live performances are.

As with the previous bands on the bill, there was a reliance on backing tracks to fill the roles that would usually be taken by the many people that have featured on Therion’s many albums. Seeing how professional and well versed the musicians and singers on stage were was impressive on its own, managing to play expertly to some very complicated rhythm changes and thematic shifts, without fault. During the 90 minute set, Therion covered a wide array of songs from various albums. It was interesting to hear the songs outside of the context of their respective albums as it highlighted how different the influences and styles each song/album has. The styles changed rapidly from song to song, with some heavy metal vibes, like ‘Din’, to a stronger focus on gothic and theatrical styles, like ‘Arrow from the Sun’. It all added up to a varied and interesting set, something you could just listen to in awe. But that doesn’t mean there wasn’t a lot of movement in the crowd. Fist pumping, chanting and headbanging were all present as the band produced some excellent cacophonies of music and epic crescendos that the fans relished. The finale of ‘To Mega Therion’ allowed fans to burn through whatever energy they had left. Awesome stuff and I am looking forward to giving the new album a proper listen soon!