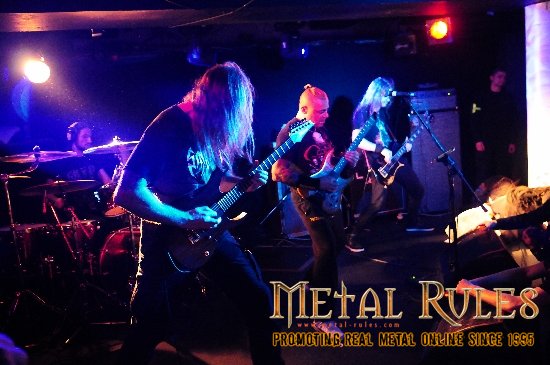 If you’re a lover of alternative music and culture, you just can’t get away from Camden Town with its dozen or so live music venues within spitting distance from the tube. It might not be quite the same place as it used to be as the High Street and markets ditch the Goth shops and herbal highs for a more mainstream boutique feel with some awesome street food thrown into the mix, but you still have legendary venues like The Underworld putting on some top-notch metal bills.

Up tonight are Dutch tech Death trashers Pestilence on their Fight the Plague tour along with Brazilian Death/Trash band Rebaellion and London’s Damim as tonight’s openers. They are on the verges of putting out their first album since 2012’s Obsideo and the production on their new album Hadeon is pretty high, perfectly blending their old school roots with their newer more Tech sound, so it’s a little surprising that singer Patrick Mameli and cohorts have decided to play an old school set rather than promote their new album.

I’ve also heard that having grown disheartened with living up to die-hard fans expectations is the real reason Pestilence has been such an on off band. Not that I’m complaining just not quite sure the thoughts behind it when they have such a solid new album to promote. Anyway! First up is London Blackened Trash band, Damim. I just managed to catch the end of their set and what struck me as I squeezed down into the crowd was that their guitar work and composition was first class. It’s a shame that I couldn’t make it there any sooner as they went into their last song, a fast tempo track called “Mirror-Image Ritual” from “The Difference Engine” album which showcases their range and packs a huge punch. The band is in the process of recording their as yet untitled new album having solidified their lineup into a cohesive and productive unit so watch out for their new album. Rebaelliun come on stage next and instantly hit you in the face with a full on sound, even louder than the band before and with their war and annihilation themed death metal you kind of feel assaulted, smacked over the head with their blasting thrashy guitar work and hard-hitting vocals. This is war and your pulled right into it. A tentative mosh-pit opens up and the crowd is a hell of a lot thicker than I expected for a cold Monday night in January and the band goes down well with the now warmed up crowd. Next up, Pestilence. Pestilence come on stage and get straight to business and I notice how young everyone is in the band, hell even the founding member looks younger than I thought he would. I’m slightly amused that these new members around him must have been all quite young when the original band wrote albums like Malleus Maleficarum and Temple of the Ancients, both classic death metal albums and it’s with a big smile that the band start off their set with the first song of their first album. The album title track rips into the crowd who instantly throw down into the mosh pit having shaken off that Christmas hangover along with their leather jackets. Parricid and Subordinate to the Domination, track 2 and 3 off their debut fall insink behind their opener of which they follow-up with Commandments, that album’s track 5 before heading into tracks off their follow-up album, 1989’s Consuming Impulse. The sound is immense and the band are really tight on stage and the crowd reward them by going totally ape-shit with stage divers and crowd surfers braving it, boots flying and phones falling. Dehydration, Chronic Infection and Echos of Death follow each other rapidly. Next up is Testimony of the Ancients material, The Secrets of Horror, Twisted Truth, Land of Tears and Presence of the Dead. Personally these are their best songs off my favorite album. Next they step a toe into Spheres and play opening track Mind Reflections and close the night, with no encore, with another track from Consuming Impluse, Out of the Body. It was a fun sweaty Monday night and I for one really enjoyed beating those January blues with some old school death metal. Check out their new album Hadeon, out on Hammmerheart records next month.