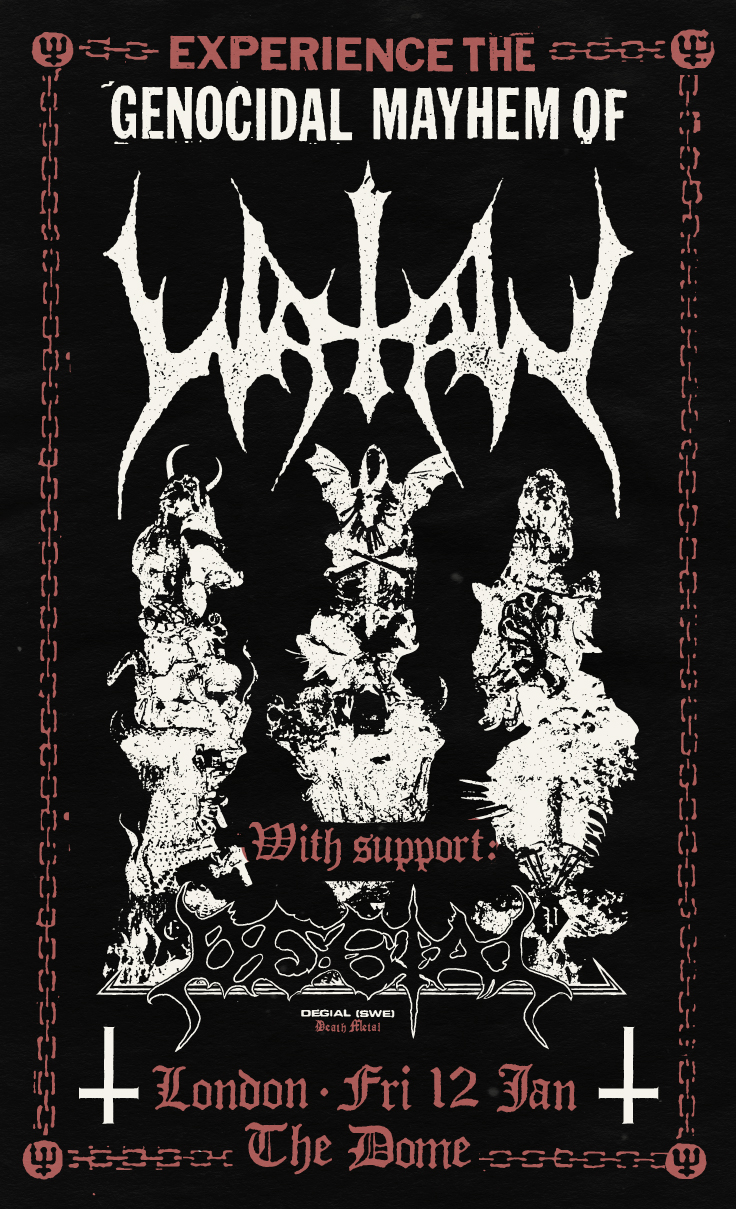 As well as practically inventing Melodic Death Metal in the early 90s, it’s also spawned many a fine Black Metal outfit, in a natural response the genre made famous by its neighbours. And some of the finest Swedish Black Metal was ready for action last Friday night with one of its veterans in town promoting their latest studio album.

Watain; the guys who put Uppsala on the BM map had come from far and wide to give us one lively rendition of their latest evil outing: Trident Wolf Eclipse.

The stage of the Dome in Tufnell Park was set for the Swedes to make haste and light up this ancient city with a brand new flame: one of satanic themes and anti-cosmic anger.

First up on the bill were some of Watain’s fellow countrymen – and live members – Degial. A band I’d never listened to before this concert so I was anticipating a fairly decent blast from the Scandinavian land as the sold-out crowd piled in and the lights went down.

A cheer went up and on came a group I could easily compare in appearance to that of fellow Swedes: Nifelheim, but there was nothing tongue-in-cheek about this band as the latter is known for.

Anyways, the band began the assault. Some audible cannons fired and a machine gun-esque blast beat sounded with the rasps and growls of a vocalist who sounded like he’d just had a harpoon fired into his stomach.

Degial were a band who meant business from the word go. Everything blended well. All songs seemed to come together finely into one long, hard and thick shower of rhythms and down-tuned riffs. Granted, the guitars could have been a little louder, but that didn’t stop everyone from having a good time. In summary, I’d say Degial are quite similar in music style to early Morbid Angel, crossed with the satanic themes and outlook of Morbid, the fellow Swedish Death Metal group fronted by Dead (Per Ohlin) before he joined Mayhem.

This was a contemporary band who knew how to marry the current sound of Death Metal with the best lashings and seasoning of the old school.

Many a well-earnt cheer went up as the group played and stoked the metaphorical fire that was now alight in the hearts and minds of me and the fellow BM fans.

Everything was now in full swing. The best part of the sold-out crowd was now packing out the venue, which I must say has had a fairly good makeover since I was last there for Incineration Festival a few months back.

Time passed with much excitement and anticipation with everyone clambering to get as close to the stage as possible, before at last: the lights went down again. And another fire was lit, this time a literal one.

Symbols and installations had been placed on the front of the stage, reminding me of a Behemoth concert, and here came the Swedes who’ve been screaming about Luciferianism, darkness and general occult themes for over 20 years.

Watain arrived with torches alight and the flames danced high and mighty as frontman Erik lit the installation in front of his mike stand before giving the order to start the assault.

Here it was, a delightfully putrid burst of finely crafted Black Metal, that only Scandinavia can offer.

Everything about this band was on point. The image was intact, not at all altered by the two decades on the road and the anger and fury firing forthright sounded just like what I’ve been hearing on CD all these years.

Classic tracks poured forth like the blood Erik poured into a chalice and spat into the audience later in the act, as well as the top tracks from latest release: Trident Wolf Eclipse.

Watain pulls no punches in the fiery honesty of their music, and this anger and brutal darkness are well reflected in their image and output. Erik and his bandmates looked as if they’d just climbed out of a sepulchre, freshly raised by a necromancer – and their songs were nothing short of anthems cooked and served from beyond the grave.

As the set progressed, I definitely felt I’d check this band out more often, and could see why this show had sold out so quickly.

Eventually, all good things must come to an end, so the Swedes left, only to return with an encore that paid tribute to one their most controversial countrymen: Jon Nordtdveit, with a cover of Dissection’s anthem: ‘The Somberlain.’

When you catch up with friends who are covered in blood spat in their faces after the show, then you know you’ve had quite the night out. This was one of the most memorable gigs I’ve been to in quite a while and a damn fine entry to 2018 on the live music front.

Watain were nothing short of divine, regardless of how low the guitars sounded and the acoustics weren’t as on point as I know they can be at this venue. But in all, I’d give them all the applause I can muster and would welcome them back without any hesitation.