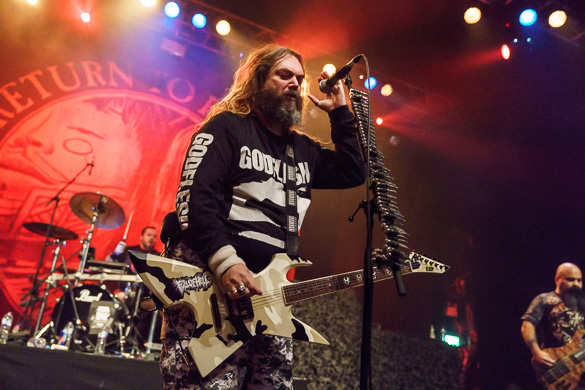 MTV Headbanger’s Ball is a bittersweet name. It was once one of our favourite shows on a really good TV channel. Now we don’t sit infront of our TV and record the show on VHS, and the channel itself turned to crap for people who aren’t interested in teenage pregnancy. At least we have a tour with the same name that brings the bands whose videos we grew up on.

I was at The Forum before the show to interview Insomnium (which will be uploaded later this week). After the chat with the Finnish guys I went back to the main hall of The Forum to check out the first band: Deserted Fear from Germany.

This was the first time the guys played in the UK. I guess it’s a good start when you play your first gig in one of the best known venues in London.

The only problem was that they started at 6.20pm so only a handful of people saw the whole set. For those who missed it I have to tell you that the trio (live they have a session bass player) plays old school death metal. And they do it well.

Straight in your face stuff: no bullshit. You know, the amazing kind of putrid stuff from the ’80s.

Heavy riffs and drums that make you feel you want punch people in the face whilst you headbang. The sound wasn’t the greatest but it didn’t take anything from the performance. I hope the guys will be back soon with a longer set because 30 minutes went by quickly.

Insomnium was the next on stage and the crowd was getting bigger.

I’d never heard about this band before before, although I listened to a few of their songs before the show – but I did not really like them.

Well it changed during the gig. They got me! The Finnish blokes’ melodic death metal has a really good, dark atmosphere. The sound was good, as was their performance.

Insomnium is full of talented musicians and they know what they have to do on the stage; no wonder they are going to play for the second time onboard 70,000 Tons of Metal in February.

I am definitely going to dig deeper into their discography. The third band was Overkill. I only saw a few songs from the thrashers as I was scheduled to interview Deserted Fear.

I have to say here that I never was a fan of East Coast thrash metal and I don’t think I will ever will be.

BUT: Overkill has tonnes of energy, they play their stuff on a professional level and they sound like they should do.

Young bands have lots to learn from them, that’s for sure. It was time for the main act of the night: the Cavalera brothers.

While I understand why they went on tour with “Roots” last year I think that this year’s tour was for money, and if we face the fact that the brothers do a Soulfly playing Nailbomb tour as well…

Not to mention that I think that the brothers played on much better Sepultura albums than “Roots”.

Anyway they started to play, the sound was good, Iggor is still an amazing drummer but Max is not on top anymore (maybe because it was the last date of the tour), not to mention that homeless people look way better than him.

For me the performance was weak. Last year I saw Sepultura and whilst most of the people say that Max and Iggor should have the right to use the name, at least those guys were like energetic. Despite the fact that the I left early, Headbangers’ Ball was a good gig with a diverse line up that should happen more often.