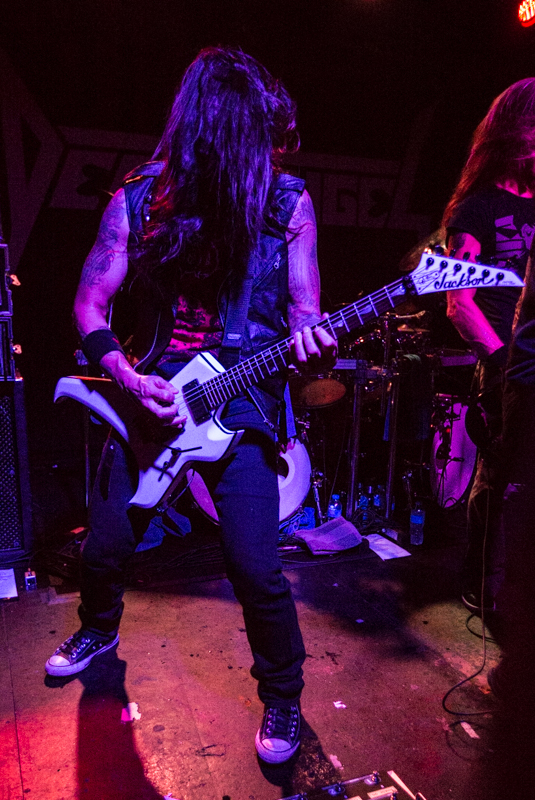 Sold out. Yes, you read that correctly. Glasgow was preparing itself for a night of some world class American thrash with a monumental double billing of L.A’s Warbringer and the Bay Area’s Death Angel. Two bands from different California; from two opposite ends of thrash metal’s existence.

Death Angel have been away from Glasgow since their last gig at the slightly larger venue of Ivory Blacks. That night, they were celebrating 25 years of ‘The Ultra-Violence, which was played in its entirety. Tonight, was going to be a very different show but we were still going to get treated to some of their most revered album. For Warbringer, it’s almost as if they never left Scotland as it had only been a few months since they triumphantly laid waste to the first Heavy Scotland festival at Edinburgh in April. Tonight, Glasgow was in for a surprise as Warbringer were planning on giving us a full rendition of their latest album, the skull crushing, face melting and all round soul destroying ‘Woe To The Vanquished’ which has been doing the hyperbolic rounds since its release back at the end of March. Having interviewed vocalist John Kevill before the music started, I was surprised to find out that their set had been cut early, for reasons which were “out of their control”. They were having to get on the stage around 15 minutes earlier than they were previously billed; which meant that everything was a little more rushed.

Well, for those who play such unequivocally fast music such as Warbringer, speed is of their genetic makeup so I doubt there was any real issue with getting things done a little quicker. They were three shows away from heading home after vanquishing Europe and the light was at the end of the tunnel. They just had a few more pushes, that’s three more explosive efforts to get through before they could let their bodies fall to pieces after all the effort and physical exertion that they have put in whilst on the road. It was time to get things going again.

Warbringer [4.5/5] came onto stage with a near packed audience waiting for their first taste of the evening’s metal. Heads were banging immediately as the band kicked off with ‘Silhouettes’ which nearly ruptured half the skulls in the crowd with its bone dusting pace and violent breaks. The first lead of the night was taken on by Chase which was then capitalised on by the incoming Adam Carroll. Things were tight and well drilled but this only aided the overall experience, as we were getting the full on power that this album just oozes. You would have never guessed that the band was short on energy as they battered on into the title track of the album. You’ve got to love how Warbringer are able to shift seamlessly in and out of thrash with some death metal breaks which provided more steal to the already heavy arsenal of metallic fury. The band were terrific showmen and really captured the essence of their music through their display on stage. Moments such as when Jessie pointed his bass at the crowd as if it were a cannon, simply captured the true brevity of the music and the story behind it. With Kevill’s voice in fine working order, he commanded the audience to join in the chants of ‘Woe To The Vanquished’. He wasn’t satisfied with the audience only providing a vocal support, and by the next track ‘Remain Violent’ we had our first pits of the evening. Kevill is a clever and intuitive individual and by coaxing the Glaswegian crowd with mention of the previous English crowds he was able to manipulate the growing mass into ever more energetic bursts of movement and involvement. Way to use a centuries old rivalry eh. This, quite comically, ended with a member of the audience shouting “fuck England” which was met with a roar of laughter from nearly everyone in the building. Nothing like a bit of light hearted hatred to break with the serious nature of Warbringer. They were giving us a stellar show and one of the best thrash performances that I have seen in this venue, maybe in any venue. They possessed a tight precision and frightening energy that kept a smile on my face in between the bouts of jaw-clenching whirls of head banging. Again, the variance of influences that permeate through their music come in and out so frequently yet naturally in an, at points, ebb and flow of speed, death, thrash, melodic and even little periods which were tinged with some black metal to create an uniformed procession of genre-spanning infidelity. Why stay true to just one though, when you can have the best parts of it all? It’s like having your metal cake and eating it too and Warbringer bake some of the tastiest, most brutal metal cakes around.

All the music was building towards the eventual climax of the album where the epic ‘When The Guns Fell Silent’ would bring all the woes of those to be vanquished (erm…the audience) to the trenches at the frontlines during The Great War. There’s a harrowing and almost mournful sound to the song, being more spacious than the other tracks with deeper, more sustained notes that merge together to create an awe inspiring and powerful sound. Jessie’s bass section built an emotive stream of music before the other forces of the band culminated together, uniting in an almost sorrowful lament. Kevill seemed to be heavily invested spiritually with the story in which he has created for this song. As the outro was taking us to the end of the album, things were abruptly cut short with the band being almost hurried into the last track of their set, ‘Combat Shock’ off their debut full length album ‘War Without End’. We got one final flurry from the band and the crowd responded with some heavy pitting to bring their set to a close. It was a true shame for their set to be ultimately cut short but it was an excellent display and one that leaves an appetite for getting future experiences of Warbringer playing live. The main event came bulldozing through without too much respite as Death Angel [4.5/5] were about to take the stage. The Audio had turned into an absolute sweatbox as a packed audience grew more and more raucous with excitement. The Exorcist theme announced the entrance of one of the Bay Area’s finest acts as the crowd joined together to shout in tremendous voice. It was founding guitarist Rob Cavestany who wandered on and took over the riff from the backtrack. All members now gathered on stage to begin the show as Glasgow was going to get a visit from the ‘Evil Priest’ from the band’s much loved debut release ‘The Ultra-Violence’. The sound wasn’t altogether there as it fell far too flat for the quality that this song deserves. The levels just weren’t right for the song but the musicianship was there for all to see. Some of the blasts from drummer Will Carroll salvaged a lot of the force that was required to drive home the song. The second track of the night, ‘Claws In So Deep’ saw the first crowdsurfer of the night emerge and surf from one end of the audience, to the front and back; all over the place really. He was to be the first of many of the night as things inside the Audio got progressively more crazier. By the third track, ‘Left For Dead’, the sound seemed to have been levelled out correctly and the night’s music was becoming more and more brazen and beautiful. The crowd were rightfully all over the place as we were being treated to some of music’s most furious tempos and it was hard to stand back and not get involved. The cymbal work was exceptional, as was the potent riffery coming from Death Angel. Rob Cavestany’s lead work was the pièce de résistance as he swung his gorgeous ivory Jackson with precision and malicious intent. After the fourth track, Mark Osegueda addressed the crowd. At first, he called us “a bunch of beautiful muthafuckas” which was met by great applaud. He then changed this to a “beautiful, ugly muthafuckas” which also went down well with the crowd. He wasn’t half wrong as everyone was caked in each others sweat; it can’t have made for pretty viewing. Death Angel made for great viewing though as they continued with their set. They played ‘Father Of Lies’ from their most recent album, ‘The Evil Divide’ which started with a course of melodic notes which searched and grew and tumbled into this rather proggy melody. This was where Damien Sisson’s bass came to life before all forces broke with a hellish fire of seismic thrash. This drove the crowd into some hysterical pitting as people were firing into each other with a ridiculous amount of speed and rage. It was if this was the soundtrack to a nice wee group slaughter or mass suicide. Certainly, it was a driving force behind this wondrous display of amicable violence. The pits continued throughout the set and by the eighth track, we were getting stage divers who would willingly, and frequently, launch themselves into the melee, spurned on by the unrelenting barrage of metal coming from the band. And why not? Mark Osegueda had already offered to take the blame for anyone missing work or school the next day so we had a free license to keep up the ridiculousness; as if we needed an excuse. The stream of crowd surfers and stage divers was as endless as the brilliant music coming from the band. It was a match made in heaven and Death Angel was our guide through the gates. Osegueda’s vocals reached to a near inhuman pitch as the tracks rolled on. To my disbelief, we even received an incredible cover of Black Sabbath’s ‘Falling Off The Edge Of The World’ which had mine and other’s jaws swinging in complete astonishment. It was a great testament to the band’s love for metal and it went down so well with the crowd. The reception that the band received was being soaked up by the band members as they looked to be loving every moment of the night, possibly even as much as the audience was. Death Angel went into ‘Kill As One’ from ‘The Ultra-Violence’ before getting to the penultimate song of the nigh in ‘Relentless Revolution’. It was a sad moment knowing that the next song after this, was the last of the night. That song came in the form of ‘The Moth’ from their latest album. The final push seen more bouts of pitting and stage divers looking to squeeze in as much living as possible into the remaining minutes which were shortening all too quickly. The pit looked at it’s largest at this point as the tempo shifted in speed to ignite a final flurry of burning energy from the crowd and the band. The big finish came and the band looked very pleased with everything that had transpired throughout the night. As a final send off, Osegueda shouted “And remember Glasgow, we live on”, and that’s how it ended…