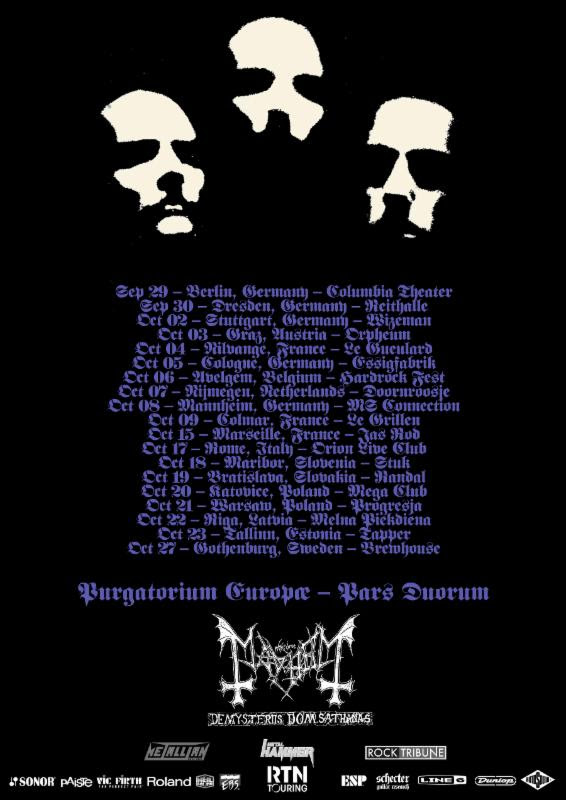 “…a purposely gloomy and aggressive beast, and one that makes no concessions to outsiders, instead following its own willful and destructive path without any apology. Give it the time it deserves… and it will be with you forever.” — Team Rock on De Mysteriis Dom Sathanas

Norwegian black metal icons MAYHEM will embark on the second leg of their European live takeover this fall. The Purgatorium Europæ – Pars Duorum tour will commence September 29th in Berlin, Germany and ravage its way through twelve countries and nineteen cities, drawing to a close on October 27th in Gothenburg, Sweden.

MAYHEM is commemorating the release of their 1994 landmark De Mysteriis Dom Sathanas full-length with a worldwide tour performing the monumental record in its entirety. The cornerstone record recently earned the #40 spot on Rolling Stone Magazine’s 100 Greatest Metal Albums Of All Time, the prestigious publication noting, “…Mysteriis… remains a singularly potent document, its expressions of alienation and nihilism lent an icy severity by Aarseth’s lacerating guitar buzz, session vocalist Attila Csihar’s arcane croak and presentation of Dead’s lyrical gothic terror and the pummeling drums of Hellhammer (Jan Axel Blomberg).” See the full list at THIS LOCATION.

For CD orders, go to THIS LOCATION. For LP orders, visit THIS LOCATION. In Europe go HERE. For digital orders go HERE where you can also stream the record. The record is also available digitally via Amazon, Spotify, Apple, Deezer, and Tidal. For the full concert, video on demand, and download, visit MAYHEM on Vimeo at THIS LOCATION.