There must be some significance to the fact that as the events described below unfolded, we passed the 30th anniversary of Celtic Frost finishing work on the group’s Into The Pandemonium album – the album, not least, which was at the centre of the most significant disagreements between Celtic Frost and label Noise Records in 1987. These events would eventually lead to the disintegration of Celtic Frost by the end of that year and have a direct bearing on anything that subsequently transpired.

In February of 1984, Martin Eric Ain and I, as members of Hellhammer, signed our first recording contract with Noise Records. We came from small Swiss villages and were young and lacked experience. Moreover, Switzerland was a country without a real metal scene at the time, rendering it near impossible for us to glean any kind of expertise from other bands that might have been active on an international level.

And even if the possibility to gain any such information would have existed, Hellhammer wasn’t an accepted entity by any means. Moreover, while there were a few music industry attorneys in Switzerland, they worked in the “real” music scene, and we were too insignificant and destitute to be able to establish any actual communication with them.

Noise Records were of course fully aware of all of these circumstances.

So we signed the record contract, delighted that our teenager dream was becoming a reality. This very dream had so far seemed completely unattainable to us in our damp, mildewed rehearsal bunker. The recording contract comprised things such as the publishing rights to our songs, and we didn’t have the slightest idea of the true, enormous significance of such terms. The text sounded professional and it definitely resembled a record contract, but it actually overwhelmed us. Due to Martin’s age, his parents were required to sign as well; that they were actually doing this served as some kind of additional confirmation that everything was as it should be. 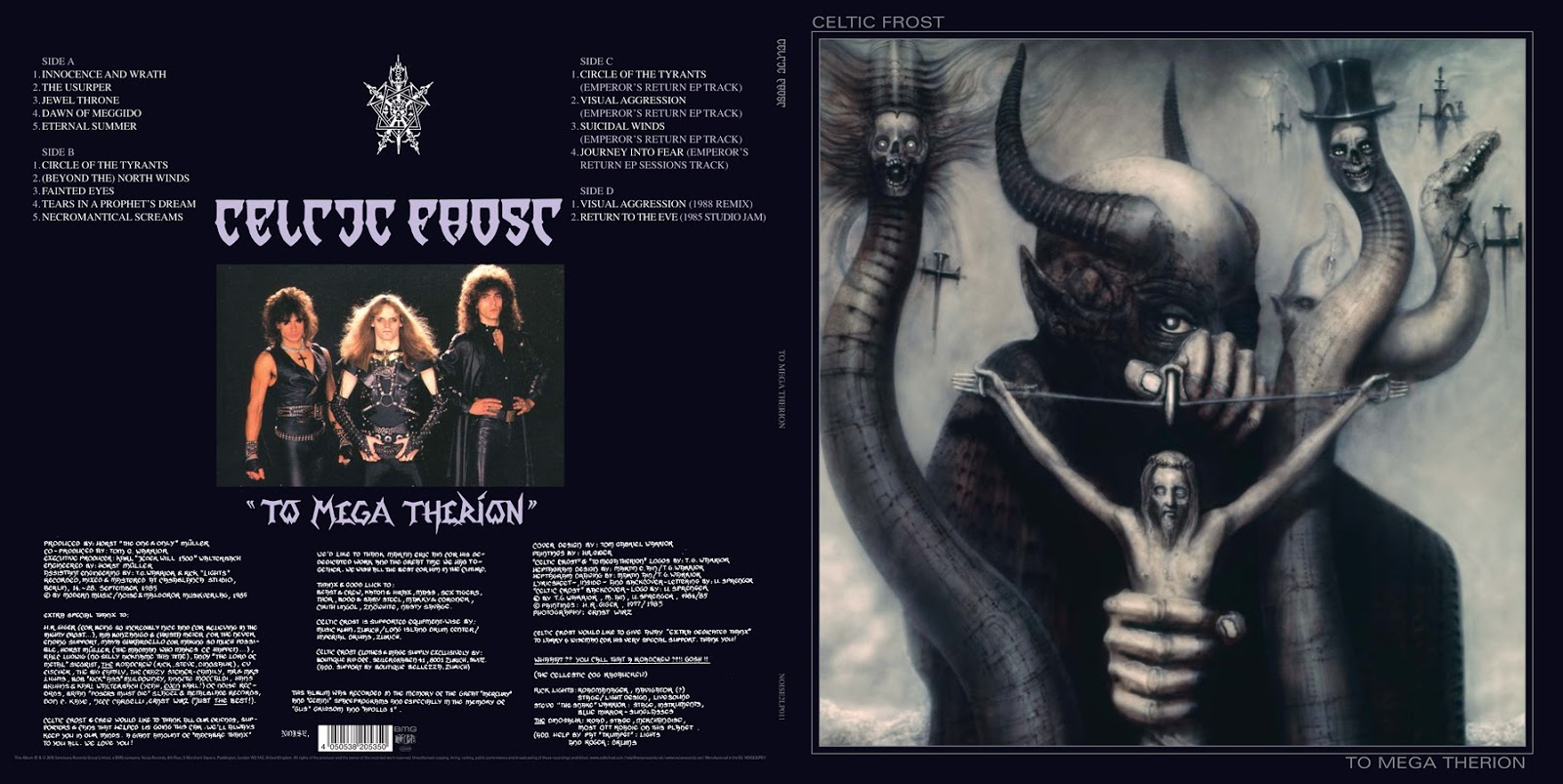 A few months later, the recording contract was transferred to the newly formed Celtic Frost. And as Celtic Frost gradually grew more popular, we became more experienced and increasingly encountered individuals who were long-standing music industry professionals, enabling us more and more to comprehend what we had signed. The rights to the music we were creating belonged to Noise Records practically indefinitely, even after our passing. Moreover, the record company had, to a large extent, also secured the financial proceeds of our band, e.g. record sales, merchandising, and the aforementioned, very lucrative publishing rights. In the still fully functional music industry of the 1980s, such proceeds were quite substantial.

And if this aforementioned situation wasn’t reason enough for disagreements between an progressively mature band and the record company, the latter choose to conduct many other band related affairs in an equally uncompromising manner. Recording sessions suffered interference, album covers were altered or outright replaced, song lyrics were deleted, submitted photos and entire booklets were discarded, songs selected by us for inclusion on our albums were exchanged, concert tours were booked without our consent, video clips were cancelled, and so on. These were years of completely contradicting views, eternal conflicts, and unilateral actions.

One should note, however, that such occurrences were by no means exceptional in the music industry of the time. A number of other bands signed to the same record company experienced similar problems, as did groups signed to other labels. And even today, I frequently come across comparable stories. Additionally, we ourselves were responsible to a substantial degree for the situation we found ourselves in: it was us, after all, who had signed the contract. And we ourselves – me in particular! – committed many mistakes as well. Moreover, I certainly should not neglect to mention that the memory of Noise Records and the pioneering spirit prevailing in the scene at the time also evoke numerous positive and nostalgic feelings.

And last but not least, the events discussed above took place some 30 years ago – half an eternity, in other words. Uncounted things have taken place since; we eventually managed to extract ourselves from the affiliation with the record company, we liberated ourselves as musicians, we learned immeasurably much (often as a result of our aforementioned, sometimes substantial mistakes), we attained control over our activities, and we ultimately continued our musical path. And in doing so, we were granted numerous fantastic moments.

It is thus all a done thing, tempi passati.

Why then this rehashing of a story long since exhausted? Well, due to the longevity of certain past contractual provisions, time and again one will be confronted by their lasting effects. Years ago, Noise Records (and thus the rights to Celtic Frost’s early albums) were acquired by Rod Smallwood’s Sanctuary Music Group; said company was later absorbed by Universal Music Group, and Universal in turn sold the Noise catalogue to BMG Rights Management in London.

Last year, BMG Rights Management decided to resurrect Noise Records and reissue a substantial part of the Noise catalogue, including the classic Celtic Frost albums of the 1980s. For the reasons detailed above, we, the former members of the group, have no rights whatsoever with regard to these albums and thus lack the entitlement to exert any influence on these reissues. One must therefore give credit to BMG for voluntarily agreeing to involve me and transferring the responsibility for the art direction for these Celtic Frost albums to me.

Next to remastering, design, archive materials, and art direction, my contributions also included a number of detailed personal texts specially drafted for this new 2017 edition of the booklets of the individual albums. And this is where the past is once again catching up with Celtic Frost. It was particularly the album Into The Pandemonium which, in 1987, was created under dramatically detrimental conditions due to the increasingly pronounced disagreements between group and label. But our other albums with Noise Records were affected to some degree as well.

It is obvious that such decisive occurrences would be part of the narrative of my liner notes, and it is equally obvious that such liner notes would inevitably reflect my very personal view as somebody who was, at the time, a member of the band, wrote the songs, co-designed the visual aspects of each album, and performed and produced in the studio. And it is exactly because of these facts that the powers that be at BMG Rights Management objected.

As part of what was, at all times, an exceptionally friendly and professional exchange of thoughts with the legal counsel assigned by BMG to assess any potential legal issues, I received from London shortened versions of my liner notes, for review and approval. These were adoringly called “redlined versions”. In this particular case, however, “shortened” actually amounted to “heavily censored”. To name but one example: driven by an obvious concern about a potential lawsuit by one of the parties involved in the original 1980s releases, BMG censored and thus slashed my Into The Pandemonium liner notes to approximately a third of their original volume. What remains of my texts was utterly mutilated and thus no longer represented a coherent narrative that made any sense. These pathetic text fragments now failed to convey the full history of the individual albums.

As much as the music industry professional in me understands BMG’s concerns, it is exactly because of the events Celtic Frost endured during the 1980s that I am a radical opponent of any meddling or censorship by a record company, and that my present-day career is one hundred percent self-determined. Regardless of where one stood on the issue, the conflicts with Noise Records affected most of Celtic Frost’s activities significantly.

One could be excused for being prompted to ponder that by executing such “redlined” intrusions, BMG are, to a certain extent, reenacting the modus operandi of the label they purchased, Noise Records. As for me, I am of course not inclined whatsoever to agree to have my texts censored. I thus informed BMG that I would rather withdraw my liner notes than to see them published in disfigured guise (a variety of diversely censored drafts had been proposed to me, in an effort to break the stalemate), particularly since the events described therein have been public knowledge for many years and have also been experienced and described by other Noise Records groups.

And that’s exactly what has taken place in the meantime: in early February of 2017, I withdrew all of my dedicated liner notes for the four albums reissued by BMG: Morbid Tales, To Mega Therion, Into The Pandemonium, and Vanity/Nemesis, and politely concluded my cooperation with BMG Rights. I was thus no longer involved when the reissue project arrived at the final review and approval stage.

Throughout all of these developments, the co-founder and former bassist of Celtic Frost, Martin Eric Ain, was constantly kept in the loop.

Given this state of affairs, I no longer feel that I can endorse and support these reissues, as they no longer reflect the wishes, intentions, and identity of the band. Moreover, I personally do not view them as “official”, as none of the former members of Celtic Frost endorses them.

It had been our intention for many, many years to finally see these albums reissued in what could be called ultimate editions. It was overdue. There had even been (unsuccessful) efforts during the past decade to initiate a collaboration to that effect between our own label, Prowling Death Records, and the current holders of the rights. Unfortunately, due to the failure of this reissue project, it now seems exceedingly unlikely that such ultimate and fully band-endorsed reissues will see the light of the day during my lifetime.