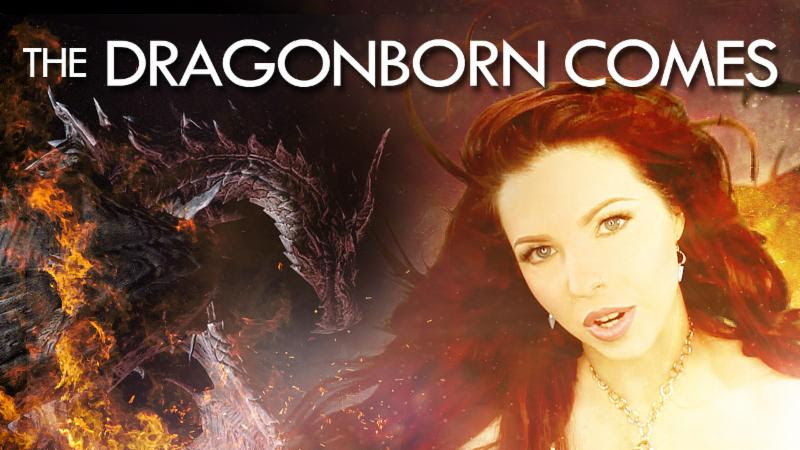 Symphonic/Celtic vocalist LEAH – described affectionately by her fans as “the metal Enya” – is recognized in the music world for her work with established heavy metal musicians such as Eric Peterson of Testament and Dragonlord, Timo Somers of Delain, Troy Donockly of Nightwish and many others. With three well-received releases under her belt ( Of Earth & Angels [2012], Otherworld [2013] and Kings & Queens [2015]), LEAH is currently working on her upcoming, currently untitled album featuring many of the players above, in addition to former Delain drummer Sander Zoer and Barend Courbois of Blind Guardian. LEAH‘s music places the listener in a world of fantasy, magic, history and everything in between.

While fast at work on said record, LEAH enjoys trying her hand at other musical endeavors and covers.LEAH‘s most recent cover comes in the form of the main theme, “The Dragonborn Comes”, from the wildly popular open world action role-playing video game Skyrim of The Elder Scrolls series.

This track will appeal to the heavy metal fan with a profound love for video games and all things fantasy! Listen here, and read the story of LEAH‘s inspiration below: youtu.be/vF03kI5HbbQ

“As you know I’ve been writing a brand new Celtic metal album due out this fall,” says LEAH.
“I was looking for inspiration and tried reading some books, but never found my muse, until my fans recommended I start playing Skyrim. So I did, and I really ran with some of those themes in my songwriting! Not only did the storyline inspire me, but the soundtrack itself is epic, as you already know. I ended up getting distracted and thought to myself, ‘Hmm… I wonder what it would sound like if I LEAH-fied the Dragonborn theme song?’ I decided to try it and see how it turned out for fun. I sent it over to my producer in Germany and he really liked my version, so I decided to release it for you! I hope you like it, and I hope the song stays true enough for The Elder Scrolls fans, while also giving a new feminine spin on it!”

About LEAH:
LEAH is a fan-described “Celtic vocal goddess” hailing from the coast of British Columbia, Canada, and is inspired by Celtic and world music influences such as Clannad and Enya to European symphonic and progressive metal influences. Her debut self-released album Of Earth & Angels received international critical acclaim, including landing the “The Best Symphonic Metal Album” Metalstorm Award for 2012. Her 2013 release, Otherworld, is a five-song Celtic-metal masterpiece, mixed by Christian “Moschus” Moos at SPACELAB in Germany (Delain, Everon, Imperia) and features the vocals of guitar legend Eric Peterson (Testament/Dragonlord) on the ethereal metal track “Dreamland”. 2014 was very successful year for LEAHas she raised over $27,000 through Indiegogo via her fans to record and produce her heaviest album, Kings & Queens, which was eventually released in early 2015 through Inner Wound Recordings. The album received dozens of four and five-star reviews, and helped her gain thousands of new fans around the world. Just like her beautiful music and vocal approach, the future is bright for LEAH!