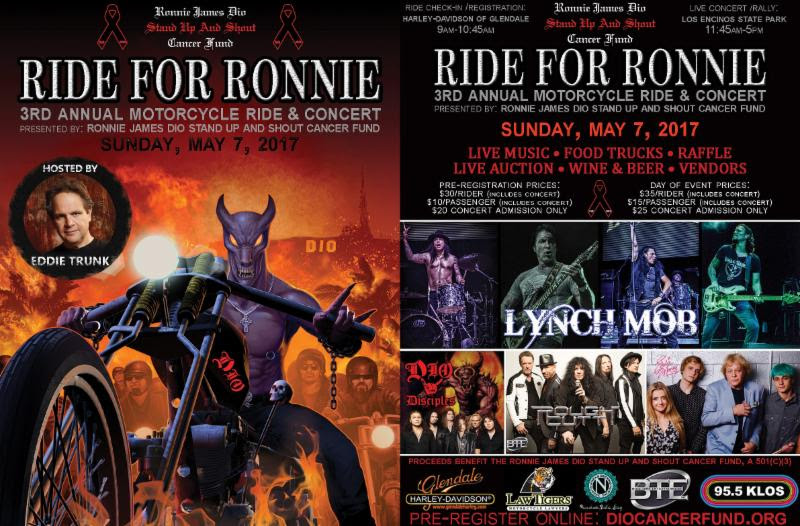 Sunday, May 7, Riding from Glendale to Encino, CA

The 3rd annual RIDE FOR RONNIE Motorcycle Rally and Concert, benefitting the Ronnie James Dio Stand Up and Shout Cancer Fund, is set for Sunday, May 7, 2017, comprising a Motorcycle Ride through the streets of Los Angeles County and an afternoon of live music. Last year’s RIDE FOR RONNIE event raised over $50,000 for the cancer charity.

A donation of $25,000 will be presented to Dr. David Wong of the UCLA School of Dentistry to help fund his team’s research into the development of a simple, non-invasive saliva test for the early detection of cancer. This is part of the Dio Cancer Fund’s commitment to this ground-breaking project, which is in keeping with its message that early detection saves lives.

There will be a display illustrating breakthroughs in the gastric cancer research that is being done at UCLA by Dr. Wong’s team, and he will be present to help explain these inroads to interested fans. Additionally, the Dio Cancer Fund will be distributing complimentary bottles of sunscreen along with skin cancer prevention information.

The silent auction will be held in one of the exhibit booths throughout the afternoon, while live auctions, featuring one-of-a-kind rock collectables, will take place during intervals between artist performances. Live Auction, raffle and silent auction items include a stage-worn full-length leather EDDIE MONEY trenchcoat from his 2000 “Millennium Tour,” a Great White acoustic guitar signed by the band members, Dio photo book signed by all of the Red Hot Chili Peppers, a Black Sabbath collectables and merchandise bundle, a variety of concert tickets, wine-tasting certificates, and much, much more.

Los Angeles’ premier rock radio station, 95.5 KLOS, has come on board this year as an event sponsor and will be out in force at Harley Davidson in Glendale for the start of the RIDE.

Slammin Sliders, G’s Taco Spot, Greenz on Wheelz and Archie’s Ice Cream food trucks will be on site at the Park throughout the afternoon. Premium beer sponsored by Ninkasi Brewing Company will be available as well as Graffiti Wine, water courtesy of Solar Rain and soft drinks. Additional RIDE FOR RONNIE sponsors include Harley-Davidson of Glendale, Law Tigers and Bigg Time Entertainment.

An array of merchandise t-shirts, baseball-style shirts, caps, CDs, wristbands, event souvenirs, etc. will be available for purchase and a “Jumble Sale” booth featuring gently-used items and collectables benefiting the Dio Cancer Fund will be also on site at the park. Additional merchandise vendors will also participate.

Both riders and concert-goers can purchase their tickets by visiting: www.diocancerfund.org/events

2017 RIDE FOR RONNIE Motorcycle Ride and Concert Schedule
Sunday, May 7, 2017