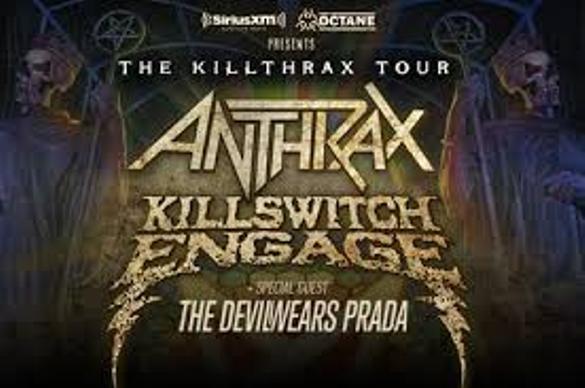 More than 35 years since their inception, Anthrax continues to be a relevant force in metal as both a live band and a creator of new music. Touring in support of last year’s critically acclaimed FOR ALL KINGS, Anthrax has been paired with Killswitch Engage for the “Killthrax” tour. Smart move, this is an attempt to reach a younger demographic in addition to their hardcore fanbase that is in their 40’s and 50’s (I fall into the latter group!). I have no interest in Killswitch or the other bands, just gimme some 80’s thrash dude! Let’s head down to Philly and get METAL THRASHING MAD!!!

The Electric Factory is this shithole that people try to pass off as a classic venue in Philadelphia. What bullshit! The original Electric Factory was in a different section of the city and it closed in 1973. This dump has only been here since 1994 and nobody has taken a paintbrush to the fucker in a while. The parking lot sucks, it is way too small and you are left scrambling trying to find a place to park, getting screwed by other nearby lots. When you first walk in there are food and merch stands to the left and right. Place is standing room downstairs with a bar to the right and the pit is large. There is a balcony upstairs with some seats and another bar. Stage is good sized, lighting is good, and there is a photo pit. Tonight is a Wednesday and it isn’t a sell out, so for a change the place wasn’t oversold and packed to the fucking gills. Capacity is 3,000 people so I would guess there were about 2,000 in attendance. Sound quality is good and loud, no distortion. I saw a lot of friends at the show and everybody was pumped to see Anthrax, the vibe was cool. Crowd was a mix of ages and my friend Bill even brought his young son Liam (9) for his first concert! Good parenting there folks! Anthrax came on at 10:20, instead of coming out to some Dio or Sabbath, they came out to the Blues Brothers’ “I Can’t Turn You Loose”! Charlie took his place behind the kit as a recording of “Among The Living” started and as he beat down on the drums, the recording turned off and his bandmates appeared and started playing. Scott and Jon with slow heavy riffs, Frankie with grooving bass, and lastly Joey came out screaming DISEASE! DISEASE! SPREADING THE DISEASE! It was awesome, what a killer opener! Crowd response was good with lots of headbanging, crowd surfing, and moshing! The ode to moshing itself was next, the infectious “Caught in a Mosh”, complete with great backing vocals from Scott (AIN’T GONNA LIVE MY LIFE THIS WAY!). Intense pit action for that one of course! Before we knew it we were getting hit with the classic “Madhouse” and a particularly vicious “Fight ‘Em Til You Can’t” (I’LL END YOU!). The band was very together and picking up steam, full of energy and thrashing all around the fucking stage! Joey’s voice was spot on tonight, better than he has sounded the last few times I had seen them (tonight is my 17th Anthrax concert), good range, power, and he had no problem hitting the higher notes. The riffing and shredding from Scott and Jon was damn near perfect, and Frankie’s bass just galloped along fluidly. Charlie is one of the best and most underrated drummers in thrash and tonight he was his usual powerhouse self. Things were off to a great start! We got “I Am the Law” early on in the set, which was a big surprise to me! Usually this is saved for the encore if played, so it was cool to get it early and it was fierce (CRIME – THE ULTIMATE SIN!)! We also got 3 new ones from FOR ALL KINGS, all of which were much heavier live, especially “Evil Twin”. Jon and Scott showed their musicianship and skill during “Blood Eagle Wings”, the most intricate song played during the set, ending on Scott’s solo. Other set highlights included John Belushi tribute “Efilnikufesin” (SOMEONE SHOULDA SAID NFL!), “March of the S.O.D”, and everyone’s favorite thrash sing-a-long “Antisocial”. Closer was a massive war dance with “Indians”. Excellent set, just wish it was longer than 75 minutes. Show was a blast and everyone went home happy! Anthrax can still bring it, don’t miss them when they come to your town!  RESPECT THE BADGE, HE EARNED IT WITH HIS BLOOD!