Timo Tolkki is a well known and highly revered musician with hundreds of thousand of fans across the world. Best known as the creative force, behind some 17 Stratovarius releases and a member of super groups such as Revolution Renaissance (members of Helloween, Edguy/Avantasia and Thunderstone) and Symfonia (members of Helloween,  Sonata Arctica, Angra and Avantasia).

In 2011, Guitar World magazine, included Tolkki in theall-time top 50 list of fastest guitar players in the worldas well as counting him among the 100 most influential ever!

Timo Tolkki in now embarking on a 2017 tour where he will be exclusively performing ‘Songs from his Career’ including Stratovarius favourites “Black Diamond” , “Hunting high and Low” , “Father Time” , “Against the Wind” … This “best of show” should bring back fond memories to all those who were there during Visions of Europe, but will also include a few deeper cuts for good measure..

Joining him on stage will be Keyboard playerMikko Harkin (ex Sonata Arctica, Symfonia) following their collaboration on Symphonia albums; Santtu Lehtiniemi on Bass, a highly skilled professional player and academic; Alex Landenburg (Rhapsody and many others) – one of the most exciting new drummers; and finally vocalist Mike Livas, well known for covering Angra and Queensryche. Timo handpicked Mike having discovered his faithful but also quite passionate renditions of some old Strato favourites. 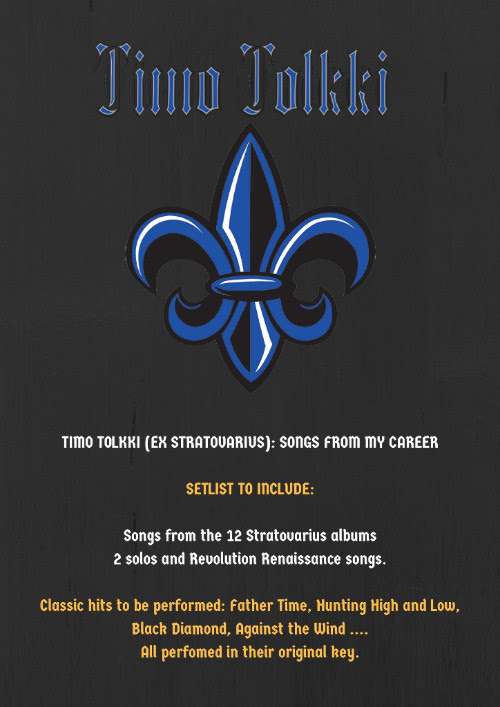