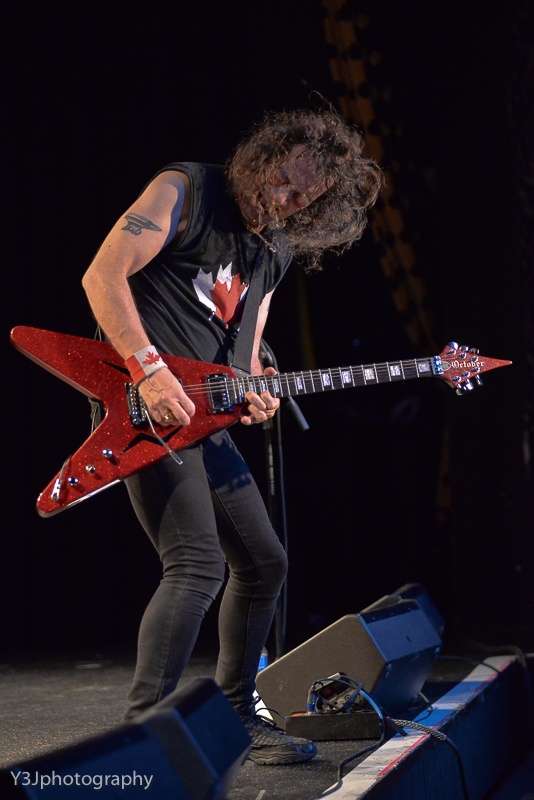 The first concert of the year is usually a fun one. The last show I saw in 2016 was Dec 17th so it had been a month so I was ready to rock! Anvil was playing at a familiar venue the Deerfoot Inn and Casino, a great place for a show, good sound and a mix of seats and standing room with a capacity of 666 or so. I think the ‘official capacity’ is 600 but since it is Anvil…

The casino crowd is different than the traditional ‘Metal’ crowd at a bar or theatre, specifically the crowd are richer, older and quieter! The room was full, but not uncomfortably so, not sold out maybe close to 300 people. That is a decent size for Anvil, way more than the last three times they played smaller bars in town. It was sort of billed as the 40th anniversary tour which really isn’t quite accurate because it is the 39th year but who is counting? It was an evening with Anvil no opening act and the show started right on time.  It was a nice early start too on a Saturday as well.  It was the bands first show of 2017 and they were on fire. The show started with the classic instrumental ‘March of the Crabs’ and suddenly there was Lips in all his glory in the middle of the crowd talking through the pick-up’s in his guitar announcing the show. After some back-slaps, high-fives from the crowd circled around him, he assumed his place on stage and the trip ripped into ‘666’!  They churned and burned through a few songs and then Lips introduced , ‘a song about peace’ and launched into ‘Winged Assassins’ which featured a decent bass solo from the newest members, Chris Robertson who had a permanent grin and made rock faces all night long. Later Lips dedicated ‘Free As the Wind’ to Lemmy and mentioned the positive impact the move had on their career.  In 2016 they played 111 shows as compared to when they would do 20 shows a year in the early 90’s.  The crowd energy slowed a bit when they played a couple of newer tracks  (‘On Fire’ and This Is Thirteen’) you could tell most of the audience was not familiar with the newer songs.   Up next was a show highlight, the Anvil classic ‘Mothra’.  This is the Lips guitar solo segment, complete with vibrator, naturally, and they stretched the  minute song into a 10 minute long song. I’ve seen Anvil many times but this was perhaps the fastest, most energetic and relentless version of that song I have seen them perform.  Killer! Then it was back into some newer songs which I respect, they played the hearty sing-along, ‘Daggers And Rum’, ‘Die for A Lie’ and the Robb Reiner drum solo piece ‘Swing Thing’.  This instrumental  stretched again into 10 minutes long with a six-minute solo by the under-rated drummer.  Before we knew it, it was time to go and they busted out ‘Metal On Metal’.   I was surprised that they were not going to do an encore (they almost always finish with ‘Metal On Metal’)  but they surprised us and came back and did a nice punchy version of ‘Born to Be Wild’ with Lips working his way back into the crowd once again to finish off the night.