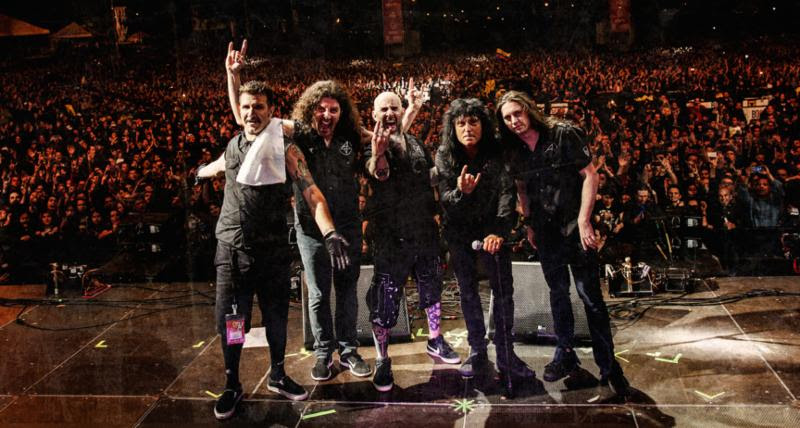 Thrash legends Anthrax and Metalcore forefathers Killswitch Engage announce today that they will hit the road this Spring to co-headline a 27-date North American tour, presented by SiriusXM.  The bands’ itinerary will also include an April 15 appearance at the Texas Independence Festival in Austin as well as each band headlining two solo shows separate from the double bill.  With KSE and Anthrax rotating the closing slot over the course of the dates, the tour will hit the ground on March 29 in Montclair, NJ and then criss-cross the continent, wrapping up in Boston on May 7.  The intense and dynamic The Devil Wears Prada will provide direct support on all dates.  Tickets go on sale to the general public this Friday, 12/16 at 10AM local time.  Log on to www.anthrax.com – http://www.killswitchengage.com or www.tdwpband.com for all details regarding ticket purchasing and pre-sales.

For Anthrax, these dates are in support of the band’s critically-celebrated 11th album, For All Kings (Megaforce), released last February.  Celebrating its 35th anniversary, 2016 has been action-packed for Anthrax.  For All Kings debuted at #1 on Billboard’s Hard Rock Albums chart and #9 on the Billboard 200, the band’s second Top 10 chart entry.  Two striking music videos made with director Jack Bennett, one over-the-top grizzly, the other an innovative stop-motion piece, an appearance on “Late Night with Seth Meyers” that paired the band with the iconic Robert De Niro, and sharing stages with bands like Iron Maiden, Lamb of God, Avenged Sevenfold, and fellow Big Four members Slayer,  were just a few of the highlights.

“Anthrax and Killswitch will be a really good blend for fans,” said Anthrax’s Charlie Benante.  “We both play metal, but we play two different forms of the genre.  I think fans of both bands are in for a ‘Total Explosion of the Senses.'” Added the band’s Frank Bello, “This Anthrax/KsE tour is a powerful ball of energy ready to unleash the metal in the U.S.”   “Anthrax and Killswitch – KillThrax!  Holy crap!,” said Scott Ian.  “I am so excited about these upcoming shows with our old friends Killswitch Engage.  Get out your pit pants and start stretching now for all the glorious action and fun!”

Killswitch Engage released the universally regarded Incarnate (Roadrunner) this past March, which debuted #6 on the Billboard 200, and #1 on Billboard’s Hard Rock Album chart.  2016 also saw KsE

appearing on a Stars Wars-themed Revolver cover, staging an unforgettable and intimate, five-club NYC takeover for album release week, and embarking on an impressive Incarnate World Tour. On November 25, the band released Beyond the Flames: Home Video Vol. II on Blu-ray, a treasure trove of gripping content, containing over 3.5 hours of footage.  At the heart of this release is a 75-minute documentary that chronicles the return of original vocalist Jesse Leach, after nearly a decade away, to the band he helped form back in 1999.  It picks up right where their 2005 {Set This} World Ablaze release left off, revealing the rest of the untold KsE story.

KsE singer Jesse Leach echoed Anthrax’s enthusiasm about the upcoming trek, saying. “We are so stoked to tour with thrash legends Anthrax!  We are sure this will bring a powerhouse of a live show with the combination of both bands. This is, hands down, the most excited we’ve been to tour alongside a band in a long while. This will be one you won’t want to miss. KillThrax is coming for you!!!!”

Confirmed dates for the Anthrax/Killswitch Engage Tour are as follows: