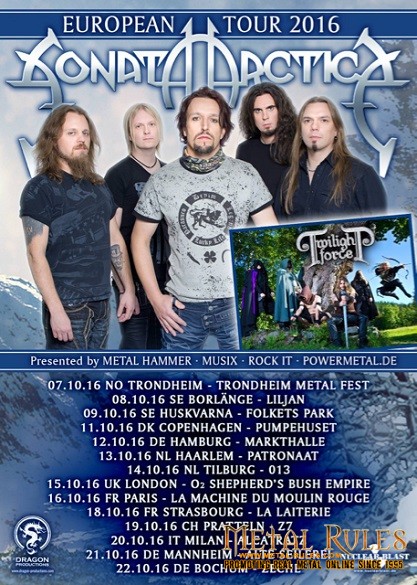 Just one year after the successful Ecliptica Anniversary European tour, Sonata Arctica are back in 2016 with a new opus “The Ninth Hour”. In order to promote this excellent ninth album, the Finnish wolves have recently done a tour throughout the Old Continent, including one date in the UK. Their previous album from 2014 “Pariah’s Child” was praised by the international press and fans.

However, “Ecliptica: Revisited; 15th Anniversary Edition” which is actually a complete re-recording of their first masterpiece received a mixed reception. For many fans, it didn’t surpass the original release but I would simply say this re-recording add a modern touch to the songs, which is interesting in some way.

Anyway, their brand new work “The Ninth Hour” proves that they are still very inspired. It contains high-quality compositions with catchy melodies and a pleasant progressive touch. Regarding this recent tour, Sonata Arctica were supported by their friends of Twilight Force whom they already met last year for the Ecliptica Anniversary tour.

As expected, they gave one show in Great Britain only, which is not surprising given the low popularity of power metal music in this country. It was a great pleasure to see both bands back in London and at the O2 Shepherd’s Bush Empire. It’s indeed a very beautiful venue which provides an excellent sound and a very comfortable balcony. Power Quest were chosen as first support act for this concert only.

Formed in 2003, this English power metal band delivered an excellent performance to my great surprise.

Indeed, it was definitely not the best line-up they’ve ever had that night. In the past, they were well-known for having Sam Totman (Dragonforce), Oliver Holzwarth (ex-Rhapsody of Fire) and a few members of Arthemis among their line-up.

They already signed at prestigious labels such as Underground Symphony and Napalm Records but never really achieved international recognition when it comes to their musical genre.

Despite everything, they still have a good local fanbase and received a warm reception from the audience. That was fully deserved as they’re good musicians, especially their new vocalist Ashley Edison. His voice was impressive at times, reaching very high notes.

I strongly recommend any fans of Symphonic/Melodic power metal to have a look at their works again. They deserve another chance!

The first time I saw Twilight Force on stage was at the O2 Academy Islington when they were supporting both Sonata Arctica and Freedom Call last year. I remember they were very good despite not having the best sound, especially for the drums).

This time, there was no technical issue and the Swedes offered a fantastic show. There has been a great improvement here. Formed in 2011, they quickly signed with Black Lodge Records and released their debut album “Tales of Ancient Prophecies” two years ago.

This horde of adventurers coming straight from a medieval fantasy world has recently released “Heroes of Mighty Magic” through Nuclear Blast about two months ago. They play Epic power metal in the purest tradition.

Despite the absence of originality in their compositions and lyrics/imagery, they perform this style very well thanks to their brilliant musicianship. They’re talented, there’s no doubt about it, but the only drawback is their obvious lack of personality musically speaking.

Twilight Force is one more “dragon metal” act to be added to a never-ending list of acts evolving within this scene.

I love bands that mix symphonic speed metal with sword and sorcery lyrical themes, but regarding the music, it still sounds too much like their compatriots Morifade and Insania (who were both far superior).

I’m sure they have listened a lot to the masterpieces “Possession of Power” and “Sunrise in Riverland” for example. Vocalist Christian Hedgren has become really charismatic, raising his sword in the air at times.

The guitar solos were flawless and remained the strongest point of their set. As usual, it was very enjoyable to see each member disguised as a warrior, knight, elf, thief and wizard. Of course, it looks so cliché, but that is part of their charm!

The crowd was absolutely conquered by their show and in the end, Twilight Force received as much applause as the headliners. Congratulations! That was the third time I saw Sonata Arctica live, after seeing them in Nuremberg during the Pariah’s Child 2014 European tour and in London last year. I’ve always been conquered by their performances and that night wasn’t an exception.

The Finnish wolves offered an amazing show to their British fans once again. They performed to perfection some classics from their early masterpieces (“FullMoon”, “Tallulah”, “The Power of One”, “Don’t Say a Word”, “Abandoned, Pleased, Brainwashed, Exploited”).

It was surprising to hear a few tracks from their most progressive albums (“In Black and White”, “I Have a Right”).

This is clearly not their most popular material for sure even though I love the “Unia” album for example.

As expected, Tony Kakko and his mates also played five songs from “The Ninth Hour” which is excellent by the way. Concerning the guitars, I still miss Jani Liimatainen a lot as he is much more talented than his successor Elias Viljanen, especially when it comes to the solos and melodies.

Despite many line-up changes throughout its career, the band has been creating stunning compositions constantly, which was not the case for some of their counterparts like Stratovarius for instance. As always, Tony is very charismatic, communicating a lot with the audience.

Even though it can be considered as boring, I enjoyed a lot his speech “Keeping Live Music Alive” in which he deeply thanked everyone for buying tickets, CDs and merchandise.

To conclude, it’s important to highlight that this London show was the 1000th one for Sonata Arctica! Thus, it was a very special night for both founding members (Tony & drummer Tommy Portimo).

Thanks to all bands for delivering a pure Symphonic Power metal madness!