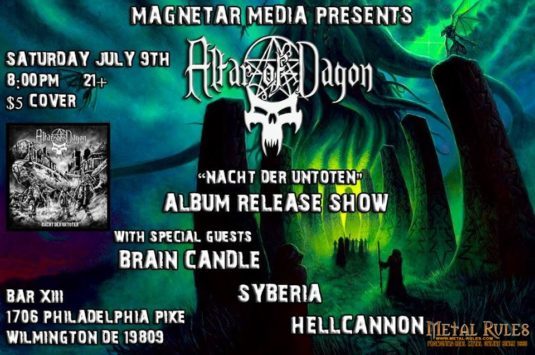 CD release parties are cool, I’ve been to a few over the years (Morpheus Descends, Sakrilejist) and the vibe is always killer. Tonight in Wilmington, Delaware at Bar XIII we’re going to get a good dose of metal! Local doom metallers Altar of Dagon are releasing their third full length album NACHT DER UNTOTEN and we are also getting Buffalo area thrashers Hellcannon and Philadelphia’s Syberia and Brain Candle! A little doom, a dash of thrash, and some punk infused metal, how’s that for a menu of ass kicking? BRING IT MOTHERFUCKERS!

Bar XIII is this cool place on Philadelphia Pike in Wilmington right off of I-495. It’s probably about 15 minutes outside of Philly. I love this place; it is one of my favorite venues to see a show, intimate, great sound, and good vibe. I’ve been here before when it was called Mojo 13, but haven’t seen it since the new owners took over and changed the name. They took a much needed paintbrush to the place and cleaned it up a bit, there’s a lot more black paint now and fewer strange mirrors on the walls. One demonic clown sign still remains from the Mojo days! Bar is in the first room, stage is in the next room to your right. Stage is good sized and about 3 feet off the ground, stage diving is possible but none occurred tonight.  Sound quality is still excellent, bands and fans agree on that point, great acoustics. The place holds 235 people and tonight we got about 60, plenty of standing room pit area and there are a few barstools and chairs off to the side and even a church pew or two! There was a stripper pole in the stage room and I noticed in the back of the bar room there were couches and pictures of S&M bondage stuff and some kind of torture table, some nights this place is Asylum 13 and some crazier shit is going on! Up first was Syberia from Upper Darby, PA (home of the beloved Tower Theater and Relapse Records folks!). Their music was mix of styles and I was impressed with their musicianship. There were hints of Black Sabbath, Meshuggah, and Napalm Death in their music, plus some great technical solos. They didn’t seem to take themselves too seriously joking around between songs, but they put on a hell of a performance. Vocals were like a harsh punk bark, I dug it. Best songs were “Bottomfeeder” (dedicated to Magic Johnson!), “Trial by Fire” and the blistering “Kamikaze”. Syberia has 2 full length albums, a self-titled and “Terms of Abuse” from 2012. These guys are much heavier live. Check them out at a local show, good stuff. Philly’s Brain Candle claims their style is heavy rock, but it seemed more like metal to me. I dug that the singer / guitarist was using an old school Rob Halford type mic! I thought they sounded a little off at first but Brain Candle rounded into form in short order. Their sound was loud, rollicking and groovy, with vocals that were a bit punky, mostly screaming and shouting which is fine with me. Guitar work was good, some impressive solos and the riffs were a bit trippy at times. Check out Brain Candle for something different, it’s a little spacey but still intense and in your face. Now for the real treat of the evening! Hellcannon was doing a mini tour and we were lucky enough to get them tonight in DE. Any time Hellcannon comes to town, metalheads should take notice. Formed in 2008, these death-thrashers are on the verge of breaking out as the best new thrash band on the scene. In addition to their impressive full length INFECTED WITH VIOLENCE and killer EP’s SOOTHSAYER and TERMINAL, Hellcannon is working on a new album and showcasing some of the songs tonight. They took the stage about 10:45 and immediately dove into the instrumental “Arrival” like a well oiled killing machine! The band was tight and together, shredding riffs and searing solos from Ryan Fiorita and Jim Nickles (former founding member of Malevolent Creation!). Drummer Marcus London and bassist Joe Leising held down the low end perfectly like a seasoned band. Then we got pummeled with some blistering death thrash, “Wasteland Remains” and “Through the Eyes of Evil”, my two favorites of the night! Ryan commanded the stage and delivered feral vocals that were a bit reminiscent of Jeff Walker (Carcass) but still his own style, with good power and projection. Jim is one of the most fluid guitarists I’ve ever seen, the riffs and solos just ooze out of him so naturally, it’s fascinating to watch. Marcus is only 20 but don’t let that fool you – the dude can play fills and blast beats with the best of them! We got lots of new material like “Warhaze”, “Road Warriors “ (more of a rock song than thrash but still pretty fucking heavy), “Day of Demise”, and “Disarmed and Deceased”. At different points Ryan tried to rile up the crowd a bit, encouraging people to come on in and start a pit. He even said you can drink your PBR in here too, trying to get people to come over from the bar! We finally did get a little pit action for “Disarmed and Deceased” and during final songs “Gate Between Realms” and “For Those Who Have Betrayed Us”. Nobody really wanted to engage me in the pit, I tried to start a cyclone with some kid but he didn’t understand what I was trying to do. It was cool we tore it up a bit though. Set was excellent and I loved all of the new material. If you like Havok, Municipal Waste, and Toxic Holocaust check Hellcannon out. I think they are more polished and heavier than all of those bands. Music is thrash with some death metal blast beats and vocals are deathy like old Pestilence, Sepultura, and Cancer. In other words, it’s great stuff! Can’t wait to hear the new album when it is finished! Altar of Dagon is an interesting blend of styles, a bit of later period Sabbath, a bit of Maiden, and more! A few days prior to the show, their new album NACHT DER UNTOTEN was played in its entirety on radio station 91.3 WVUD, nice! Tonight we got a good dose of their new material; only one song played (“Nethera / War of the Witch”) was an older tune. The band blasted off a little before midnight with “Dagonian Death Rider” and never let up, steamrolling us with chugging guitars and haunting vocals though the witching hour. I was impressed with their musicianship and their shifting of tempos. Chapel’s vocals were clean and powerful, sometimes ghostly melodic, sometimes raspy, never drowned out once. Riffs and solos were razor sharp and the drums and bass were killer. Great set, my favorite tunes were “Dealbreaker”, “Ahnruk Skullsplitter” (how’s that for a title?), and “Seer of Six”. Check these guys out for some cool melodic doom. Overall it was a very varied night of metal and a fucking killer time! Check out Syberia and Brain Candle if you are in the Philly or Delaware area. Keep an eye out for Hellcannon and Altar of Dagon, both bands are on the rise in the respective genres and appear to have great futures. As Tom Araya from Slayer would say, MURDER IN MY FUTURE, KILLING IN MY FUTURE!