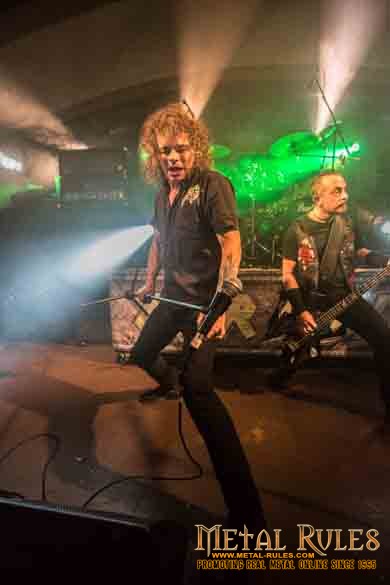 It was time for the UK to get the Killfest tour which had been gracing many a nation on this planet over the last few years. This line up had a mammoth roster of bands with Steve Smyth’s One Machine, Polish death metal legends Vader and New Jersey’s very own titanic thrash outfit Overkill; something there for all leather clad members of the family.

Overkill hadn’t been back to the city of Glasgow since they last played at the Cathouse around the same time of year in 2014 and the expecting crowd have had their fill of waiting for the band’s return up to this point. This show was also at the Classic Grand which allowed for extra spectators to cram into the venue for what was the biggest metal show in town.

There was a sizable queue waiting to get in from the start as the doors were opened and the stairs were climbed to arrive on the scene and start the early evenings festivities. A steady trickle of bodies slowly filled the floor before the stage as One Machine was about to get proceedings underway.

One Machine [3.0/5] went to kick things off and just like that, boom, nothing happened. The sound wasn’t there. One Machine encountered some major technical difficulties. They could not get anything going as the drums, guitars et al were not producing properly and things became less excitable as the band was doing their best to keep the crowd entertained without the power of music-which they had all come to the show for. Time passed and no one was sure about what was going on before finally the cue was given and One Machine kicked in with ‘Forewarning’. That got the audience interested again as the band blazed through the song with a great release of pent up energy. Alas, this was the only song afforded for their set as time had ran out and their curfew was calling.

Not the best start but it was now time for Vader [4.5/5] to lay waste to the Glasgow crowd. It had only been a year since Vader headlined a show at the Audio, but they weren’t headlining this tour and they weren’t touring on the back of 2014’s ‘Tibi Et Igni’ so it was free game for a dive into their extensive discography. The band came on and the frontman and guitarist Piotr Wiwczarek immediately got the crowd on side before they opened up with ‘Wings’ which was completely obliterating with James Stewart rampantly smashing into the drums providing a thunderous cacophony of brutality Vader didn’t let up as they immediately smashed through to ‘Go to Hell’ from ‘Tibi Et Igni’. The pits opened then as the crowd couldn’t wait any longer and impassioned by the technical destructiveness provided by Vader, they tore into each other mercilessly. Vader were impeccable. They were incredibly tight as they blazed through their set. Reborn in Flames merged into Sothis and all those attending were eating it up. We even got treated to the short yet traumatizing ‘Carnal’ as they were nearing the end of their set which, again, had been impacted through the earlier issue with the sound. Vader finished strongly with ‘Triumph of Death’ as the crowd cheered vehemently. Next up was what we had all come to see as the mighty Overkill prepared to give Glasgow a full-on thrash assault that would not be forgotten anytime soon.

As the lights dimmed a great roar amassed from the crowd. There was around a 30 minute wait between bands so the crowd was restless by this point. All was forgotten as Bobby Blitz ran out and screamed his welcome, the crowd cheered again as Overkill [4.5/5] put the foot on the pedal and opened with ‘Armorist’ from 2014’s White Devil Armory’. Overkill were unquestionably on form. They were playing a large chunk of ‘Feel The Fire’ and ‘Horrorscope’ tonight as the albums were celebrating their 30th and 25th anniversaries respectively and it didn’t take long for Overkill to take a trip down old thrash memory lane as ‘Rotten To The Core’ was our second serving of the night.

The energy emitted from both the band and the crowd was extraordinary. The crowd-surfers were out in force as Overkill were relentlessly bulldozing through their set. Bobby Blitz’s voice was perfect, he had no issue hitting the high notes and his energy and presence was mesmerising. The band were furiously synced together which was even more impressive when considering that the drummer for tonight was Ron’s sound man Eddie Garcia, who is more known for his role in Pissing Razors, but Ron couldn’t make it on this tour so it was up to Eddie to fill the gap, and he filled it expertly. All forces combined to great effect as we were bombarded track after track. There wasn’t much time afforded to speak to the crowd and there was no need. We were all preoccupied with the sonic assault as we were treated to the traumatic ‘Blood and Iron’ which bled into ‘Coma’ so there was no letting up. When ‘Horrorscope’ came on, the end of the set was drawing nearer. Overkill eventually left the stage after playing ‘Overkill’ and then ‘Ironbound’ and we were gearing up for the encore.

They always save the best for last as they tore into ‘Elimination’ and the crowd were utilising the last of their energy reserves for the final push. As a last testament to the evening, a big send off was required, Bobby Blitz came back to say ‘Fuck You’ one more time to Glasgow and the crowd responded by throwing their fingers in the air as a salute to the band. Sadly ‘Fuck You’ was the final act of the evening which was a night of mixed emotions. With lost opportunities and loss of time for the first two acts it would be fair to say that we suffered a share of disappointment. But what was lost was made up for by the exploits of Bobby Blitz, D.D. Verni, Dave Linsk, Derek ‘The Skull’ Tailer and of course stand in man Eddy Garcia.

It was another tantalisingly smashing thrash night in Glasgow and it is safe to say that we cannot wait until the Overkill bus parks itself in our city once again.