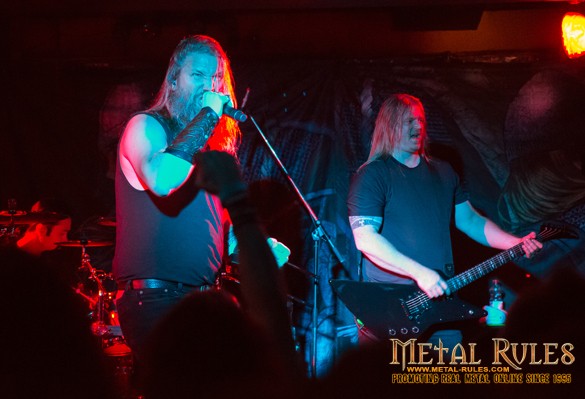 One year after their successful European tour with Huntress and Savage Messiah, Amon Amarth went back to the UK on the 22nd of March to deliver an exclusive launch show for their forthcoming tenth album “Jomsviking”. Last year, the Swedes did a couple of gigs throughout Great Britain but there wasn’t any date for the capital surprisingly.

This time, their London fans had the privilege to see them at the Underworld Camden for a very special show.
Their brand new opus “Jomsviking” is planned to be released on the 25th of March through Metal Blade Records (for North America) and Sony Music (for the rest of the world).

To promote this event the best way possible, the band had the great idea to do four intimate concerts in England, Netherlands, France and Germany just before the album’s release date. I’ve heard that tickets sold out in 5 minutes for the London date and many people got angry about this.

That wasn’t a surprise at all since the Underworld is clearly too small for such a popular band like Amon Amarth.
Moreover, they hadn’t played in London for a few years and as a consequence, the fans’ expectation was even bigger. In 2013, “Deceiver of the Gods” was highly praised by the international press and it’s one of their best works to date in my opinion.

“Jomsviking” is the horde’s first concept album ever. Two video clips were made for the songs “First Kill” and “At Dawn’s First Light”. I have to say they’re both excellent and look like short films. The band has always made great video clips during their career. Regarding the music itself, I have the feeling the songs are a bit more melodic than in the past.

It seems that Johan Hegg and his comrades are trying to attract a wider audience with these fresh compositions. However, we still need to listen to the rest of the album to have a better and definitive opinion. There was no support act for this unique gig. Before the musicians came on stage, most of the audience received a beautiful horn (autographed by all members) at the entrance of the venue.

That was unexpected! I deeply thank Amon Amarth and Metal Blade Records for this awesome present. Then, everyone had the opportunity to pre-order the new album (Digipack CD and vinyl editions) with a beanie or patch. We could also get some nice “Jomsviking” posters and meet three funny Viking soldiers to take photos along with them.

The goal of this launch gig was also to promote briefly the ancient Scandinavian history/culture in a way. Last year, I was blown away by their live performance at the Colchester Church (Arts Centre) in Essex. Who would have imagined Amon Amarth playing in an old church?

I was very lucky to attend this incredible show. As soon as these mighty Vikings came on stage, the crowd turned crazy and the mosh pit could start. The Swedes delivered an impressive set of melodic death metal, spanning a big part of their discography. As planned, they played six songs from “Jomsviking” and many classics.

The new song I’ve appreciated the most is clearly “Raise Your Horns” thanks to its catchy chorus in which charismatic vocalist Johan Hegg invited the fans to drink beer with the horns they had just been offered. This is perhaps the most melodic composition the band has ever written.

They also performed brilliantly their most well-known tracks (“The Pursuit of Vikings”, “Death in Fire”, “Deceiver of the Gods”, “Destroyer of the Universe”, “Father of the Wolf”, “Guardians of Asgaard”, “Twilight of the Thunder God”) to the great satisfaction of the audience.

We got a deluge of death metal hymns to their Norse gods. At the end of the set, Johan introduced their new drummer Jocke Wallgren (who replaced Fredrik Andersson recently) to the fans.

The only small negative point I’ve noticed was about the sound. Sometimes, we couldn’t hear the double bass drum very well, which was a pity. Anyway, Amon Amarth offered a great show that night. They’re planning to come back to the UK at the end of the year for their next European tour. Dates haven’t been confirmed yet but this will happen for sure! Raise your horn to the Vikings!