Review by InfamousButcher, Photos by She-Wolf Any time Slayer comes to town, it’s a fucking event! Promoting their excellent new album REPENTLESS, the masterminds at Nuclear Blast have decided to match the thrash icons with Bay Area thrash legends Testament and re-born Liverpudlian death metallers Carcass! How’s that for a thrash and death sandwich?!? FUCK YEAH! Right up my alley! And it’s at the awesome new Fillmore Philadelphia! SCORCHED EARTH THE POLICY! BRING IT! The Fillmore Philadelphia is this great new venue in the Fishtown section of the city that opened late last year. I was here for King Diamond last November and now it looks a little more broken in. The place holds about 2,500 people and tonight it is fucking sold out! It has seats up in the balcony and downstairs it is standing room pit with bars on the sides and in the back. Stage is large and not too high off the ground; sound quality and lighting are stellar. Outside the main concert hall there are more bars and plenty of room for merch. Slayer merch was cool but on the pricey side, there was a bit of Testament stuff and very little Carcass stuff. I gotta say, I’ve been to virtually every major metal event in the Philadelphia area for the last 6 years, and I didn’t recognize many people in the crowd. Most of my buddies that I always see either weren’t there or I couldn’t find them in a sea of douche bags. Unfortunately, the venue is designed for people to “have their own personal concert experience” so I think some people went to be able to say, look at me, I’m at a Slayer concert. WTF? Metal is about unity damn it, a brotherhood. I wasn’t feeling it tonight. Oh well, at least the show itself was great. Still riding the wave of 2013’s SURGICAL STEEL, England’s Carcass continues to tour and play festivals, revitalized and lethal again. Although I loved the addition of Carcass on this bill, I wasn’t sure what audience reaction would be, given that this isn’t a death metal crowd. No matter, Carcass impressed them with their musicianship and power and won over the crowd within a few songs. As the instrumental 1985 blared over the loudspeakers, drummer Daniel Wilding and guitarists Bill Steer and Ben Ash took the stage before the arrival of frontman bassist Jeff Walker. Upon Jeff’s entrance, the band tore into “Unfit for Human Consumption”, an amazing swirling mass of chugging riffs and scorching solos. Jeff delivered the raspy growls and the lower ones too with conviction. The band hardly took a breath as they moved to some HEARTWORK and NECROTICISM material (“Buried Dreams” and “Incarnated Solvent Abuse”, respectively) which sounded brilliant. “Incarnated Solvent Abuse” really got people moving! Bill Steer is the only death metal guitarist I’ve ever seen playing a Gibson Les Paul, which is basically a blues / rock guitar. I don’t think anybody else has the skill / virtuosity to pull it off! One of the very best in his genre and in all of metal, Bill just wailed away on that fucker, the man can shred and shift to melodic with ease. Ben and Daniel are competent musicians, but Bill and Jeff really shined the most. Set was great, I would have liked some SYMPONIES OF SICKNESS material, but with the shortened set we didn’t get any songs with Bill’s ultra deep vocals like “Exhume to Consume” or “Reek of Putrefaction”. Also, NECROTICISM is 25 years old this year, but there was no acknowledgement of that, just 2 killer cuts which were my faves of the night, “Corporal Jigsore Quandary” (good pit action!) and the aforementioned “Incarnated Solvent Abuse”. When Carcass finished I wanted more and so did the crowd. Musically, Carcass was the best band of the night. It was my third time seeing them; hopefully the next time will be a headlining tour. Always a thrash fan favorite, California’s Testament has a huge catalog of classic albums to draw from. To my surprise, as the band took the stage the intro for “D.N.R (Do Not Resuscitate)” started and I thought, holy fuck, this is the opener?!? Usually it is one of their encores! Unfortunately it was a little muddy but I still dug it! Up next was “Legions of the Dead” which I had never gotten live before! HOLY SHIT! Guns really started blazing with “Rise Up” from DARK ROOTS OF THE EARTH! Chuck Billy’s bellowing voice, Alex Skolnick and Eric Peterson’s riffs and solos, and the best low end in metal – Steve DiGiorgio (bass) and Gene “The Atomic Clock” Hoglan (drums) were on a roll! Next we got a great version of LOW’s “Dog Faced Gods” (best song of their set – CONFIRM WHO I AM, CONFRONT WHO I CAN!) and then one of my personal favorites “The New Order” (THE HUMAN RACE IS NOW A RACE AGAINST TIME!). The classic “Practice What You Preach” (nice low vox by Steve on the chorus!) was well received by the crowd, and multiple pits broke out for “Into the Pit.” During “The Formation of Damnation” we got a Wall of Death per Chuck’s request, and Gene’s hammering drums were superb! Then it was all over – good set but too short! A band of Testament’s caliber should have gotten an hour instead of 40 min. The set was a good mix of stuff, this was the 12th time I’ve seen Testament and I got two songs I had never gotten live before! New album should be out later this year! Bring it on! Notorious for being one of the very first extreme metal bands in existence, Slayer also has the well deserved reputation of being one of the best live acts of all time. Sure there are heavier bands, sicker bands, and louder bands. But pound for pound, gig for gig, Slayer’s still the king live, even as these guys approach their mid fifties! As “Delusions of Savior” played on the p.a., various Slayer symbols projected on the red curtain, inverted crosses, pentagrams, etc, until it dropped and “Repentless” started. Sounded fine but was a little slower than the album. Not blown away yet. Crowd got violent in a hurry though and there were multiple crowd surfers and lots of moshing. Then came one of my all time favorites “Postmortem” (COME AND DIE WITH ME FOREVER SHARE INSANITY!!) and the intensity was there, plodding through the slow section and then tearing through our central nervous systems like a weedwacker during the fast part! Next we got a real gem, “Born of Fire” (UNLEASH ALL MY BURNING WRATH!) and I was like, OK I’M FUCKING AWAKE NOW! Slayer was in great form tonight, shaper and fresher when I last saw them at Mayhem Fest last Summer. Tom Araya’s voice was plenty loud and you could always hear him over the chaos. I thought Paul Bostaph’s drumming really stood out tonight, more so than other times I have seen him with the band, he administered a sonic beating on us! Gary Holt looks very comfortable now in Slayer, he has meshed with the band extremely well and with the new material is starting to put his personal stamp on things. I thought his solos during “Hell Awaits” and “Angel of Death” were excellent; he honored Jeff Hanneman but still made them his own. Kerry King was as rock-steady as ever, cranking out riffs and shredding, and his foreboding playing at the beginning of “Seasons in the Abyss” was pretty cool. Since this is the first full tour for REPENTLESS, we got a lot of new material, most of which sounded heavier than it does on the album. I really dug “You Against You” and “Take Control”, those are among my faves on the new album and live they had extra punch. “Pride in Prejudice” sounded about the same as the album, moody, grinding, and I think “When The Stillness Comes” is better live, although I wish it had about 2 more minutes of shredding at the end. Set was an unbelievable hour and 45 minutes of mayhem! The end of a Slayer show is like an inferno that can’t be extinguished, an unstoppable force that continues to pick up speed. Every time I thought it was winding down, another unexpected song like “World Painted Blood” (My wife really dug that one – MAN HIMSELF HAS BECOME GOD AND LAUGHS AT HIS DESTRUCTION!) or “Payback” (PAYBACK’S A BITCH MOTHERFUCKER!) would kick in full throttle! Other highlights included “Hell Awaits” (I CAN TAKE YOUR LOST SOUL FROM THE GRAVE!), “Black Magic” (A FORCE OF SATAN’S MIGHT!), and of course staple closers “South of Heaven” (BEFORE YOU SEE THE LIGHT, YOU MUST DIE!) and “Raining Blood” (TRAPPED IN PURGATORY!). For “Angel of Death”, the green Hanneman banner shone brightly as the band delivered their most furious performance of the night (“TEST OF HEAT BURNS YOUR SKIN YOUR MIND STARTS TO BOIL!), bringing the house down! What a finish! I was exhausted but jubilant, Slayer gave everything they had and so had the fans! As an added bonus, Slayer cured my cold with all of the screaming, singing, and headbanging! Catch this great tour when it comes to town! Slayer is still FUCKING SLAYER!!! 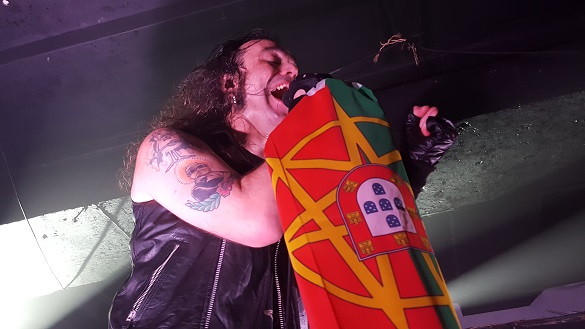