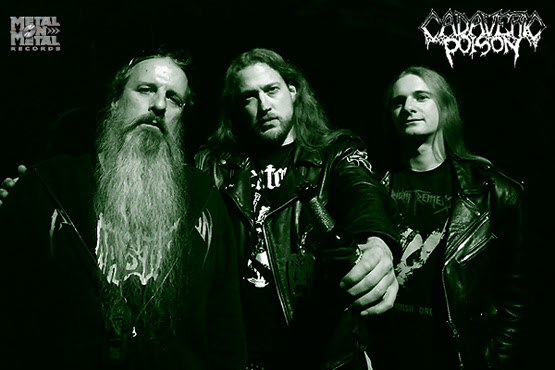 CADAVERIC POISON, an old school death/thrash metal project featuring members ofMASTER (Paul Speckmann) and WITCHBURNER (Simon Seegel and Felix Darnieder), have signed with Metal on Metal Records for the release of their self-titled debut album, scheduled for April 29th. The band had one EP out on Dying Victims Productions in 2014, from which the title song, “Fight for Evil”, is up on the band’s YouTube channel.

Commented Jowita Kaminska-Peruzzi, Metal on Metal Records CEO:
“We are proud to announce the co-operation with CADAVERIC POISON, an old school death/thrash metal project. Even though as a band they’re a newcomer (formed in 2014), the three musicians involved in it are far from being new to the scene. Guitarist (and now also bassist) Simon Seegel has been in the German thrash institution WITCHBURNER for 22 years now, drummer Felix Darnieder has been his band mate in WITCHBURNER since 2002, and finally, the vocalist, Paul Speckmann, living in Czech Republic since the end of ’90s, doesn’t really need much introduction – he’s a true veteran of the death metal scene, known mostly for his bands MASTER, ABOMINATION and DEATH STRIKE, but he has also been in several other acts, including Czech death metal pioneers KRABATHOR.
When we heard CADAVERIC POISON’s “Fight for Evil” EP, and Seegel asked us if we’d be interested in releasing their album, we didn’t have to think twice. Their self-titled debut is a true old school death metal manifesto – it will take you back to the time when the genre was just emerging and often had some thrash metal elements.
I’ve personally had a good working relationship Seegel for about 10 years as the artist who painted the last four WITCHBURNER covers, and being also a big fan of MASTER, ABOMINATION and DEATH STRIKE, I’m truly happy and honoured to be working with CADAVERIC POISON.”

More info about the band can be found on the CADAVERIC POISON page on Metal on Metal Records website. Stay updated on the band’s activity on Facebook. 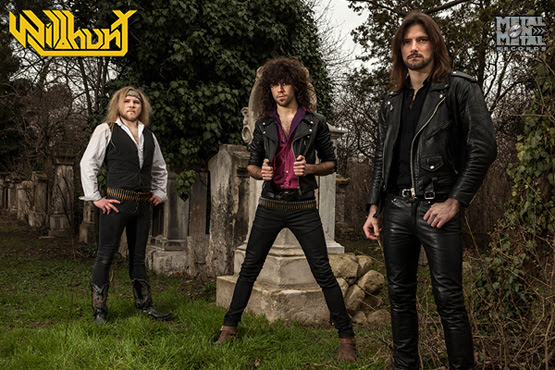 Metal on Metal Records announced the signing of a young Austrian technical thrash metal band WILDHUNT. Their debut full-length is titled “Descending” and will be out on April 29th. The band prepared and put on their YouTube channel the album trailer with excerpts of most of the songs.

Commented the label:
“We are always on the hunt for young talented bands (and when we come across one that really stands out from the crowd, they have our full attention), but in this case WILDHUNT were the hunters, as it was the band who got in touch with us a couple of months ago, sending us their debut full-length. These thrashers from Austria started out in 2011, but their music and sound harkens back to the late ’80s/early ’90s when some technical thrash gems were released in Germany and Switzerland… to the point that if we hadn’t known what album it is and somebody played it for us, we would have thought it actually IS from that era! We can hear many influences from bands like DEATHROW, DESPAIR, CORONER or GRINDER, but they have managed to create their individual sound and give their music a unique feel. These guys have impressive technical skills, but what’s even more important, their songwriting is very strong, too.”