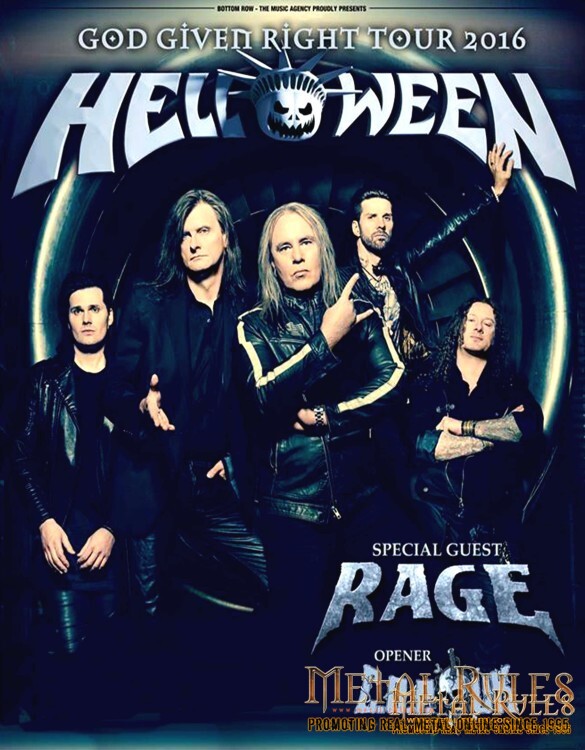 When two German power metal legends join forces to tour, it is always positive for the fans. Helloween is one of the most popular bands in their genre, and the band released its 16’th studio album, MY GOD GIVEN RIGHT, in May of 2015. The band is a familiar visitor to Finland, and they have played here almost every year for the past 10 years. Rage, in turn, has undergone major changes in recent times. The band’s previous visit to Finland was in 2006, ten years ago, so this was set to be an interesting event for fans of both bands.

Germany’s Rage was originally born around the same time that Helloween first started in the early ’80s. The band’s classic lineup of Peavey Wagner, Manni Schmidt, and Chris Efthimiadis released several high-quality albums in the ’80s, including PERFECT MAN, SECRETS IN WEIRD WORLD, and TRAPPED before splitting up in 1994. Later on, the band went through several changes. In 1999 renowned guitarist Victor Smolski and drummer Mike Terrana (Yngwie Malmsteen, Axel Rudi Pell, etc.) joined the band’s ranks, and the new lineup released several successful albums like UNITY (2002) and SPEAK OF THE DEAD (2006). In 2015, the band had a new line-up, consisting of Peavey, guitarist Marcos Rodriquez, and drummer Vassilios Maniatopoulos. The renewed band played their first shows in 2015, and now they returned to Finland with Helloween. The venue wasn’t packed when the band opened with  “Black in Mind” followed by “Sent by the Devil,” which both are from 1995’s classic BLACK IN MIND album. It’s been about ten years since Rage last performed in Finland with the previous line-up. I also remember seeing the “classic line-up” playing in Hameenlinna back in 1991. All these shows have been completely different, and I would like to say that I’ve seen three completely different bands instead of seeing Rage three times in three decades. The new line-up sounded fresh and hungry in Helsinki. Peavey is still Peavey after all these years. Even if the man’s hair is gone, and he now has a bit more weight, his voice is always great, and he’s having a good time on stage. The new guys might not be virtuoso players like some of their predecessors, but they both did decent work, and Marcos turned out to be a showman in the truest sense. The sound was good and clear, and it was great that the band now played songs that Rage hadn’t played in a long time. The band’s 90’s and albums BLACK IN MIND and END OF ALL DAYS were strongly present, and from the 80’s we heard only the classic “Don’t Fear the Winter,” which sounded phenomenal. The new track “My Way” sounded at least promising. The band will release their new album in May, and it will certainly be worth checking out. For one reason or another, Rage has never achieved great success, such as, for example, Helloween. But this gig proved once again that it is not due to the quality of their music and musical skills.

Black in Mind
Sent by the Devil
End of All Days
Back in Time
Down
My Way
Until I Die
Don’t Fear the Winter.
Higher Than the Sky Helloween is definitely one of the most influential bands of the whole power metal genre. The band has served as a model for thousands of bands from around the world, and without them, many great bands today would sound totally different. Although Helloween has gone through several line-up changes during their 30-plus year career, they have always survived. The current line-up of vocalist Andi Deris, guitarist’s Michael Weikath and Sascha Gertner, bassist Markus Grosskopf and drummer Daniel Löble have been together for over 13 years. The band released their latest opus, MY GOD GIVEN RIGHT, in May 2015, and now the tour finally reached Finland.

On this tour, Helloween played two shows in Finland. Maybe it was partly because of that, but the Circus wasn’t now completely sold out, unlike last time. There were approximately 700 fans when there’s room for over 1000 people. But it didn’t seem to bother the band who took the stage with a storm and opened up with their iconic classic “Eagle Fly Free.” The sound was tight and clear, and the crowd went nuts when the band next headed into another classic “Dr.Stein.” Vocalist Deris led his band with style. Sometimes he’s been criticized because of his vocals on older tracks, but now he seemed to have a perfect evening, and his singing sounded easy and effortless.

The band has sometimes been criticized because they rely too much on their 80’s material, but that wasn’t true either this time. Of course, all the mandatory classics were heard, but now the setlist included a lot of material from often overlooked the 90’s era as well. It was fantastic to hear forgotten gems like “Mr.Torture,” “Before the War,” or “Where the Rain Grows.” MY GOD GIVEN RIGHT was present with three tracks. In my view, the album is their most substantial release in years, so I was hoping to hear a bit more, but it was good to hear even this much. It was also positive to see that the new track “Heroes” is becoming a new anthem and live classic for the band.

As mentioned, the setlist included surprises and enough new material. Other than that, not much has changed since the last couple of tours I’ve seen in the past. Deris was great, and the original members Weikath and Grosskopf, can still deliver good performances. They both still have the same look they have had over 30 years! The same cannot be said of the band’s “youth section” of Gerstner and Loeb, who both looked like they could have been members of any of the boy bands out there. Also, Loble’s massive drum set, which included six bass drums, was ridiculous, but it didn’t really matter either because things like that were just a part of Helloween’s “German humor,” for which the band has become known over the years.

Eagle Fly Free
Dr. Stein
My God-Given Right
Steel Tormentor
Mr. Torture
Waiting for the Thunder
Straight Out of Hell
Heroes
Drum Solo
Where the Rain Grows
Lost in America
Power
Forever and One (Neverland)
Halloween / Sole Survivor / I Can / Are You Metal? / Keeper of the Seven Keys
Encore:
Before the War
Future World
I Want Out Overall, the evening was great. Both bands proved that German metal is still going strong, and there’s still plenty of life left in these pioneers.

Welcome back any day!

MORE PHOTOS FROM THE SHOW 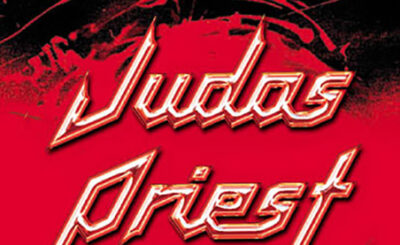