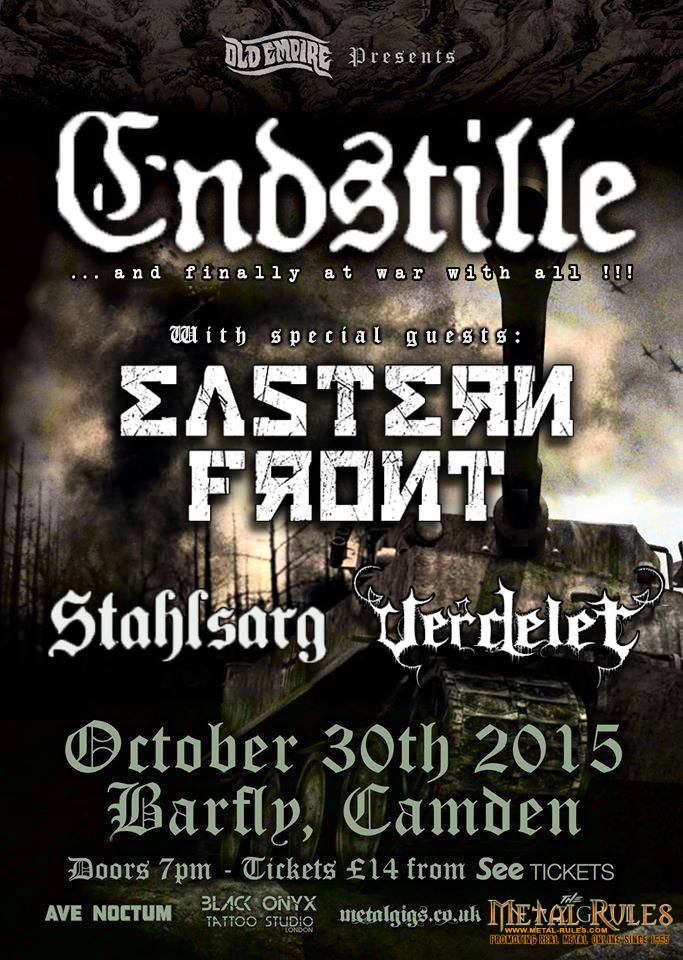 November is a time of remembrance across the UK and somewhere in nearly everyone’s history, a relative fell in war, especially the world conflicts. Many take to wearing poppies on their lapels as a mark of remembrance – others decide not and keep to themselves with their grief.

And there are some of us, particularly us metalheads, who choose to remember the wars at their most horrific – by putting such themes to the most terrifying of music.

By that I am referring to the recent exploits of war themed black metal acts: Endstille, Stahlsarg and Eastern Front, who blew away many a fan at the Camden Barfly tonight.

First up on the bill were UK black metal act Verdelet, one of the hardest working bands I’ve seen emerge in the past few years. And they did not disappoint at all. Regardless of the small crowd and how the sound engineer kept making the songs disappear into the realms of feedback the group carried on and belted out tune after tune. I’ve yet to see this band put on a bad show, which I doubt will happen any time soon. Once again we have a well meaning band let down by the inconsistencies of the people working to bring the music to the masses. Good work Verdelet, you certainly set the tone for the evening. [4/5]

Then the onslaught broke forth, as Suffolk based band Stahlsarg took to the stage to give the city its first dose of war metal for the evening. They were in town to promote their debut album: Comrades in Death. And it did feel as if I were surrounded by comrades, for the crowd increased dramatically for this band. It appears they and Eastern Front were the fan favourites of the evening. I’d seen Stahlsarg at Bloodstock before, and seeing them indoors did make them sound quite different. Here we had a band who are ideally enjoyed indoors, for their screams and machine gun percussion and shrieking guitars bounced around the room making me feel as if I were running through no man’s land to an enemy trench. A stellar performance was given with the crowd crying out memorable lines, but some seemed a little too enthusiastic. A few guys kept trying desperately to start a mosh pit, which the rest of the crowd weren’t suited for, and one drunken idiot kept jumping on the stage as the band tried to progress through the track. Even though Stahlsarg didn’t disappoint, we had another classic example of the few ruining it for the masses. Thankfully the masses fought back and Stahlsarg ended their set with hard earned victory. [3.5/5]

It looked as though the first wave of the attack had broken the enemy lines, now we ventured forth to watch Eastern Front blast their way through some of the finest English black metal I can only liken to Marduk’s panzer division days. Having released their second album Descent Into Genocide last year, the group were as fired up as any ripe band of cannon fodder can be and gave us a proper bombardment of tracks covering historical moments like Operation Barbarossa, the battle of Stalingrad and the red army sweeping across eastern Europe to Berlin. What I admire about bands covering such themes as this, is that they do it in the most brutal of fashions. Such music as that of Eastern Front and Stahlsarg tells the listener just how evil war can be and does not romanticise it in the slightest. An excellent performance from a band obsessed with history and a good lesson on what you expect when called to fight for a cause your leaders claim to be justified. [4/5] So it seemed as if we’d cleared the proverbial city from its occupants and we were now ready to launch a final assault to drive the remnants from our land.

But it seems as if the latest operation to cleanse the land of evil was not the type that would get beyond the first hurdle. German headliners Endstille began their attack with a less than energetic response from the crowd. As I said earlier, Eastern Front and Stahlsarg were the favourites of this night, and the crowd was definitely smaller for the Germans. And I can see why – there didn’t seem to be enough to take seriously about this band. At first they seemed a typical war metal group, but then vocalist Zingultus began talking to the audience more than singing. He was going on about anarchy in the world and worshipping Satan, which are themes I really was not expecting from such a band like this. I can only assume these guys are running low on black metal ammunition and they may soon resort to career cannibalism, as many troops have done when the supply line runs out. Time to take a break and go back to the drawing board Endstille. You weren’t as victorious as the others on this occasion. [2/5] War and history are things I’ve had a long love for and am very pleased to see them alive and well in the metal world. This was a true night of brutal remembrance!