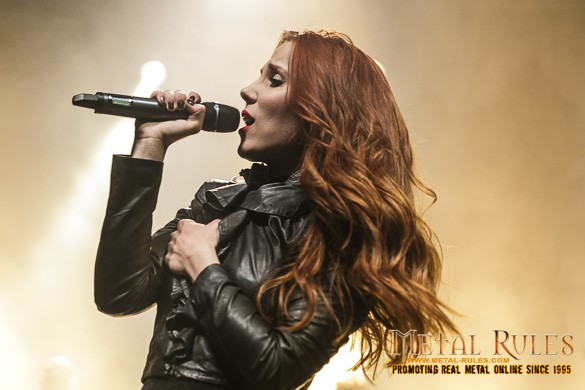 Review and Photos by Graham Hilling

It’s a cold night in London but the crowd queuing outside the Forum this evening are enduring it in stoic fashion. The queue is reassuring long, which means this is likely to be a full house and a gig with a real atmosphere.

The first band this evening is Neonfly and enough of the punters have made it in by the time they take to the stage to make the venue at least feel partially full.

Neonfly are one of those bands that have been around for ages but are only just starting to seep into the metal consciousness. They play good old fashioned rock for the most part, with metal overtones.

They are also very accomplished in the live environment, moving around the stage like they own it. It’s a short but enthusiasm infused set that includes “A Gift to Remember” and newer material like “Highways to Nowhere” and “Better Angels”.

They are well received and there’s no shortage of happy faces, however, it’s left to Dragonforce to really raise the adrenaline levels. Clearly there’s quite a few people here specifically to see these guys. A massive backdrop, beautifully lit completes the experience. If you’re into wildly guitar solos then there is likely to be enough material here for several weeks worth of wet dreams.

The musicianship can also be appreciated for what it, very impressive, very precise. Like Neonfly, this band is no stranger to the live environment and all of the performers, with the exception of newboy drummer Gee Anzalone who is obviously stuck behind his kit, make full use of the stage, literally running from one side to the other in between widdles.

The songs themselves are well constructed with big hooks, although many are a little over worked with them starting to drag by the end of the song. There are no 30 second Napalm Death type blasts here! That’s not to say that there is a shortage of speed, on the contrary, many of the songs are driven along at a frenetic pace.

The dual solos of Herman Li and Sam Totman are note perfect, awe inspiring and boring in equal parts. They sometimes feel like this is soloing for the sake of soloing rather than really adding a great deal to the compositions but I’m probably the only person in the Forum who is thinking this, judging by the ripping reception each of the songs receives.

“Symphony of the Night” sees the audience raising their “lit” phones in the air and the nice break in the middle of “The Sun is Dead” is very welcome.

By the time they leave the stage having finished with “Through the Fire Valley” you could be forgiven for thinking they were the headlining band.

So it is left to Epica to close the evening off in style. By the time they take to the stage the Venue is pretty well full and there’s an air of expectation that you don’t always get at gigs, this actually feels like something just a little bit special is about to happen!

When they do eventually take to the stage, it’s to the first three songs from “The Quantum Enigma” and this is a fine way to start. The lights throughout the show are also excellent, really making the show complete.

“Originem” rings out and serves as an excellent intro for the band to take to the stage to. “The Second Stone” follows closely on its’ heals, raising the pace and setting the bar for the evening very high. Played brilliantly with all of the recorded flirtations with choirs on playback the venue is filled with a glorious sound.

Simons voice is clarity itself, her singing voice gets better and better. “The Essence of Silence” is the next song on the list and once again, played flawlessly with all of the “extra” pieces either played by Coen Janssen on the keys or on playback. Either way, the sound really is awesome.

From here on in, the set takes us back through the earlier albums, occasionally coming back to the current crop and “The Quantum Enigma”, which is undeniably an excellent album.

Throughout, the show is visually as well as acoustically impressive, with lights carefully choreographed for each song. Simone Simons is a strange juxtaposition, dressed up to the nines and looking every bit a “star”. The rest of the band look like they’re dressed in their normal clothes. Not that it matters at all, Epica are on fire this evening.

It’s left to a storming “Design Your Universe” to close up the evening. I’d expected a good show tonight but Epica exceeded these expectations and more. Impressive does not come close to doing this show justice, one of the best gigs I’ve been to in 2014.