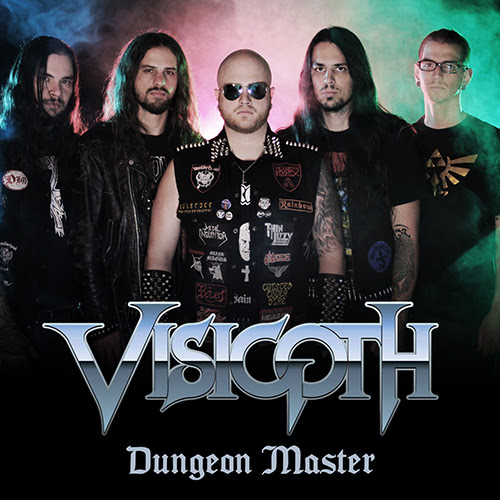 Salt Lake City’s Visigoth have released the debut single from their upcoming full length album, due out in early 2015. The purveyors of true heavy metal have unleashed “Dungeon Master” across all digital music outlets! Download now via iTunes or Amazon MP3, and stream onSpotify! The band will also be joining King Diamond and Jess and the Ancient Ones as the openers for the October 26th show at The Complex in Salt Lake City, UT! Tickets for that show are available now at showclix.com.

Additional details about Visigoth‘s upcoming album will be made available later this year.

About Visigoth:
When the gods called for metal traditional and true, Visigoth answered. The year was 2010, and Jake Rogers allied his bardic magic with Lee Campana’s six-string sorcery to forge a tribute to the old sound of heavy metal. Thus the demo “Vengeance” was born.

Its completion sent tremors throughout the salted wastes of the Salt Lake City underground, attracting the attention of powerful musical forces. Jamison Palmer slung his mighty axe over one shoulder and trudged his way through the ice and snow of this inhospitable realm, lending his soul-rending riffcraft to the legion. He was soon joined by the mystical bass groove thaumaturgies of Matt Brotherton and the unrelenting storm-throned siege of Mikey Treseder’s furious drumming. Together, they became known as Visigoth.

As a constellation they traveled throughout the Salt Lake valley, determined to liberate their allies from the enemies of true metal. All who heard their mighty riffs, scorching leads, and infectious choruses joined the Iron Brotherhood, becoming acolytes of all things heavy. After many hard-fought battles, the band came together to record the “Final Spell” EP in 2012, sealing the pact between them with rites ancient and sorcerous.

Visigoth plays heavy metal that hearkens back to the golden age of ironclad riffwork and powerful vocals. They pay tribute to the titans of steel that left their mark on the history of the genre, and their earth-shaking sound echoes with a deep reverence for their roots. Visigothgoes above and beyond mere imitation, making their own musical mark on the genre they lovingly embrace. In Visigoth‘s realm, there are no frills, no gimmicks; there is only heavy metal.