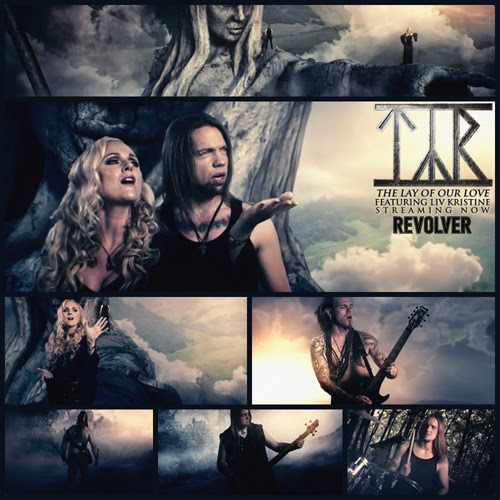 TÝR has unveiled their latest music video, “The Lay of Our Love,” from their most recent album, “Valkyrja.” The song features a vocal duet with Leaves’ Eyes vocalist Liv Kristine. So, naturally, fans will be excited to see that Kristine joins Heri Joensen and the rest of TÝR in this new video! The video was produced by Stanimir Lukic, directed by Ivan Colic.

TÝR comments on “The Lay of Our Love”: “We’ve wanted to make a CGI video for a long time, and this is our first one, so we’re obviously excited for the release and reception of the video. On top of that, the presence of Liv in the video makes it even more special. All in all we’re very pleased with the result.”

TÝR will be joining Children of Bodom on their “Halo of Blood over North America” tour in early 2014. The tour will embark on February 14th in Quebec City and wraps up on March 28 and 29 with back-to-back shows at Irving Plaza in New York, NY. Additional supporting acts are TBA with announcements coming soon. Tickets and premium packages are available now exclusively at SHOWstubs.com.

TÝR performed live on August 10th as part of the Faroe Island’s Summarfestivalurin in Klaksvik. Over 8,000 Faroese were in attendance as the band put on a huge set featuring old favorites, as well as new tracks, including “Blood of Heroes.” The event was filmed and a video for “Blood of Heroes” can be seen now at www.metalblade.com/tyr.

“Valkyrja” debuted on charts worldwide upon release in September of 2013. In the US, the album reached #15 on the Billboard Heatseeker’s Chart, #22 on Current Hard Music, #39 on Overall Hard Music, and #70 on the Independent albums chart! On iTunes on day of release, “Valkyrja” reached #4 on the metal chart. In Europe, the album entered at #45 on German Top 100 Album Charts, and #76 on Switzerland’s charts. And in Canada, the record reached #26 on the Metal chart. On iTunes Canada, the record peaked at #2 on the metal chart, #9 on the rock chart, and #73 on the top 200 albums chart!

The concept behind “Valkyrja” involves a story based around a nameless, Viking-era warrior, who leaves his woman and goes off to impress the Valkyrie on the battlefield so that she may bring him to Valhalla, or to Fólkvangr, the home of Freyja—the goddess associated with love, sexuality, beauty, fertility, gold, sorcery, war, and death. One can say the album is also indirectly about women and how they affect men and what men will do to impress and obtain women. Front man and founder Heri Joensen goes on to explain; “the woman that the warrior leaves may represent the earthly women. Freyja, The Lady Of The Slain, may represent the perfection of Women, and the Valkyrie is the link between the two, taking men from earthly to godly women.”