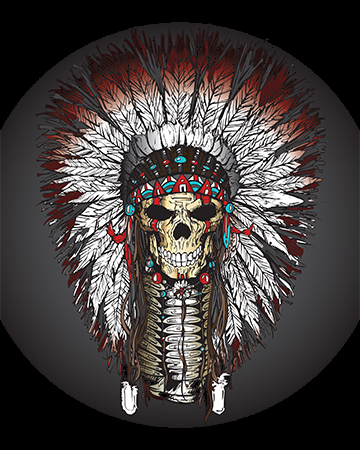 “Shadowtrain: Under a Crooked Sky,” the documentary film by rock legend George Lynch and Emmy-nominated filmmaker Mark Mclaughlin is one of four films in the running for IndieWire.com‘s Project of the Month.

After winning the final Project of the Week poll in March by a landslide, “Shadowtrain” has moved onto the monthly poll, the winner of which will receive consultation from the Tribeca Film Institute.

Cast your vote for “Shadowtrain: Under a Crooked Sky” at THIS LOCATION.

Voting ends on Friday, April 5th at 5:00 p.m. EST. Note: Votes are confirmed by email. After voting, please look for an email from Poll Daddy and confirm your vote. Indiewire nor PollDaddy use your email address after the confirmation. NO REGISTRATION is required to vote.

The film explores a hybrid way of life merging modern society with the ancient practices of people who have lived in harmony with the land for thousands of years; native American Indians. The film reveals its message through the journey of a group of renowned musical artists as they share their rock music on a road trip through Indian reservations of the southwest. Lynch recently spoke to ClassicRockRevisited.com‘s Jeb Wright about the film. Check out their conversation HERE.

For more on “Shadowtrain” visit www.shadowtrainmovie.com. See below for details on the film’s IndieGoGo fundraising campaign.

While the documentary is nearly complete, the filmmakers are now seeking help in seeing their collective vision come to fruition. In order to see “Shadowtrain” become a reality, Lynch and Mclaughlin have launched an IndieGoGo Flexible Funding campaign where contributions can be made towards the completion of the film in exchange for autographed copies of George Lynch’s most recent release Legacy, guitar lessons, a signed guitar and more. This is a non-profit campaign and donations are tax deductible. To donate to the making of “Shadowtrain: Under a Crooked Sky” visit the link below:

Payments can also be sent in via personal check, cashiers check and money order made out to IDA & mailed to:

A trailer for the film, featuring Tom Morello (Rage Against The Machine. The Nightwatchman) and Serj Tankian (System Of A Down), has been posted at this location.

For more clips from the film and to learn more about the message behind “Shadowtrain: Under a Crooked Sky” and what you can do to help, visit www.shadowtrainmovie.com.When injustice becomes law, resistance becomes duty..

George Lynch is living the American dream. He’s got a great wife. Great kids. A Grammy. He’s of the most recognized names in Rock Guitar. Over his career George has played in front of millions of screaming fans; and sold millions of records. He’s lost count of how many fans have come up to him over the past 30 years to thank him for the way his music has changed their lives. And if George has his way, he has only just begun to change people’s lives. Because George is not only a rock star, he is a passionate environmental activist, motivated by compassion, seeking enlightenment not only for himself but for everyone.

George Lynch has something valuable to add to the public discourse. He is deeply committed to helping Americans understand the unimaginable cost to this country which has evolved to a place where only a privileged few can actually attain the American Dream, and the social and economic injustice that it breeds by design. When people stop believing they can make it if they just work hard, because they know they work damn hard, and they still can’t make it. When they start to feel the game is rigged for a privileged few, and tough luck Bud, you are on your own. It is a humiliating thing to have believed a lie and more humiliating to have passed it on to your children. And that shame will disconnect us from ourselves, our families, our friends, communities, the earth and our future.

George has dedicated himself to use his music as an instrument of change rather than self-enrichment. He issues a call to arms to fellow environmentalists who know how to Rock! Three time Emmy winner Vincent Nicastro on drums, highly respected multi-clan tribal leader Gregg Analla on vocals, the amazing Gabe Rosales on Bass, and Donny Dickman on keys join George Lynch’s mad skills on the guitar and become Shadowtrain, the band. They are joined by Mark McLaughlin, a master storyteller and Emmy-nominated filmmaker Mark McLaughlin to take a Rock and Roll road-trip around the countryto understand who we are and who we have become, by exploring Native American culture.

Music played on the tribal lands on the mesas of the southwest Rez, at Pine Ridge and Wounded Knee, following the Trail of Tears make connections that deepen into friendships and alliances as they share meals and stories with tribal musicians elders, shaman, government officials, Indian activists, artists and celebrities, intellectuals and everyday people. They take the long walks together, visiting the ghosts at the ruins of the Carlyle Indian schools as they try to see how native ideas could apply to the modern world to see how we can be of help to them as well as what we can learn from the tribes about being a nation, connecting with the earth and caring enough about it and our own future to want to make it more sustainable. 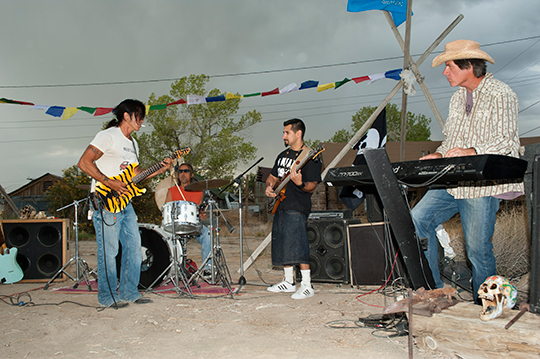