EarMUSIC will release the long-awaited new studio album by STRATOVARIUS called Nemesis, as standard 11-track edition as well as 13-track special edition on February 22nd. Check out a sample of the title track below:

Nemesis will include the following tracklisting:

‘Castles In The Air’

‘If The Story Is Over’

Another sample of the track ‘Unbreakable’ can be heard below:

Stratovarius are hailed as one of the most influential and successful symphonic metal bands in the world and they have managed to establish themselves as one of the metal scene’s heavy names. The new album, Nemesis, unites all the best traits of the band’s melodic, powerful, fresh and technically elaborated metal, all spiced up with an incredible sense for melody.

The album was produced and mixed by Matias Kupiainen and mastered by Mika Jussila from Finnvox studios, who has a long history with the band.

Nemesis has a dark and more modern sound compared to the band’s last album, Elysium. It clearly shows how much the band has matured and grown as songwriters. At the same time, the band focused all their attention and work into creating and recording Nemesis. Singer Timo Kotipelto has spent three weeks recording the vocals in a cottage in the Finnish countryside.

Matias Kupiainen adds: “I have more or less lived in the studio for four months, obsessing over every detail. I feel very relieved that we are done and I am very happy with the material and the sound.”

Timo Kotipelto agrees: “Making the album this time was easier because we gave it as much time as it needed. We have worked our asses off to make this and we hope the fans will like it.”

Without doubt, the fans will love it! The album has it all. From the typical melodic and powerful Stratovarius sound in ‘Abandon’, to the aggressive and energetic ‘Stand My Ground’, the album represents the new style of the band mixed with good old melodic power metal. Stratovarius’ musical approach is today wider and richer than ever. The song ‘Fantasy’ sounds almost ABBA-esque with its catchy pop tune, but it’s powered by the famous Stratovarius metal sound, louder than ever. ‘Out Of The Fog’ integrates some folk music elements, with lyrics telling the story of a young person forced to march blindly into battle. The only ballad on the album, ‘If The Story Is Over’, is a very emotional song with a grand arrangement that builds up to using the full band and ends with a small female choir. The title track ‘Nemesis’ is a typical Stratovarius song, with echoes of medieval melodies with powerful double bass drumming and the catchy pop melodies from this side of the millennium.

Says Timo Kotipelto: “The title track of the album; with its modern twist on the myth of Nemesis, tells a story of a preacher who gives each one what they deserve, good or bad. The song has a very nice riff, cool melodies and a great good old Stratovarius style chorus.”

To shorten the waiting period for the album, January 25th finds the release of the limited edition EP, Unbreakable. It features five songs: the new album leading track ‘Unbreakable’ and a selection of four songs from previous albums, remastered by Mika Jussila. Songs like ‘Falling Star’ (taken from Polaris) and ‘Freedom’ (taken from Infinite) show a different, catchy side of Stratovarius and guide the way to the new masterpiece Nemesis.

Matias Kupiainen about the new song: “’Unbreakable’ is a very important song to me and the lyrics have a lot of personal meaning. Sometimes you can snap out of your day to day fog and see what is important. And when you are in that special moment, when you have that special feeling, you are invincible, unbreakable; you should really stop and enjoy the feeling. Even, if the whole world falls apart tomorrow.”

Timo Kotipelto adds: “This album has a darker and more modern sound. We, as a band, have gone through a lot and we have matured as songwriters. The making of this album was easier than before, because we could give it as much time as needed.”

‘Why Are We Here’ (taken from Intermission)

Stratovarius and AMARANTHE are teaming up in a double headline bill next spring. The Nordic Nexus Of Nemesis Tour 2013 will kick off in Munich, Germany on March 20th. 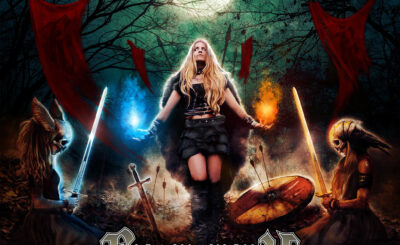 VEXILLUM – NEW ALBUM OUT IN THE SPRING ON SCARLET RECORDS

NORTHTALE – to support UNLEASH THE ARCHERS and STRIKER on European Tour!